Hercules may not be true to Greek mythology (and it may have received more than its fair share of criticism for that) but it sure is a blast of entertainment with a fun premise, great characters, and some of Disney's iconic animation from the 90's. The story focuses upon the young and incredibly strong Hercules as he learns from his adoptive parents of his place in the sky as someone who was a God, fallen, and unable to return to Zeus, his birth father, unless he can somehow be capable of proving himself as a "real hero" (and that the key to that is much more than his already great physical strength).

Hercules enlists the help of a renowned personal trainer Philoctetes (Danny DeVito, who gives a fantastic voice-performance) to help him become even stronger and more skilled in the craft of saving the day so that can return to the sky and "fit in" again (as he is often ridiculed for being unnaturally strong).  Along the journey to finding what it takes to be a real hero, Hercules is a naturally splendid singer as well (Roger Bart performing the songs), singing the anthem of "Go The Distance". He meets a mysterious girl named Meg (who is perfectly voiced by Susan Egan) while on this quest and the two start to form a special connection.

Hercules begins to fall for Meg and wants to learn what he can about her as the two become romantically involved. Yet the evil mastermind who threw Hercules out of the loop years ago, Hades: Lord of the Underworld (voiced by the brilliant James Woods) is out to destroy Hercules and stop him from getting back to the heavens and might just be getting in the way of the two of these lovebirds having a happy ending as well.

Directed by legendary Disney filmmakers Ron Clements and John Musker (The Little Mermaid, Aladdin, Treasure Planet, The Princess and the Frog) this duo has largely been responsible for several of the great Disney animation film productions dating to 1986's Great Mouse Detective. This Disney filmmaking team is one of the best in all film (not just animation). I think of these filmmakers as visionaries in the field of animation but also just as director's in general.

While Aladdin will always hold a special place in my heart as my favorite Disney film, other efforts of this team are exceptional across the board too. I love their style, which consistently deftly blends the comedy and action with a sense of sweeping spectacle. Characters are never lost in the shuffle and the pacing, flow, and emotional backdrop of the film is left intact. This directing quality makes Hercules an easily enjoyable adventure film and one that audiences are sure to find thrilling to one degree or another.

Written by the two co-directors, alongside writers Don McEnery, Bob Shaw, and Irene Mecchi, Hercules has an often hilarious and charming script which keeps the proceedings as enjoyable from beginning to end. The goals of the filmmaking show that it was designed as an animated comedy with some dramatic and action-oriented sequences thrown in, not as a great adaptation of mythology. While some purists looking for more Greek mythos in the Disney storyline may walk away disappointed, anyone hoping for a entertaining spectacle will feel pleased with the finished results.

The animation style is incredibly fluid and beautiful to behold with character designs that are highly memorable, lush background artwork is readily apparent, and the large scope of the artwork in both the heavens and underworld settings of Hercules feels remarkably detailed, visually inventive, and original for this production.  Hercules is ultimately all the more fun because of its charming animation, screenplay, and direction and the filmmakers ability to be playful with this storytelling universe. Disney fans who have yet to see Hercules are strongly encourage to check it out (and soon). It may just surprise the unfamiliar as being far more of a "hero" than a "zero" as far as Disney animation goes.

Hercules arrives on Blu-ray with a solid and frequently stunning 1080p High Definition presentation. Not only does the encode quality raise to over 30mbps, which makes it a technically impressive encode rate, the color reproduction is amazing. The art shines.

The production was meticulously well executed and everything about the animation style manages to impress. If there is any downside, it is that the film does have occasional minor banding and aliasing. However, I did not detect these on the video frequently, and for the most part I was left feeling satisfied and impressed. Presented in 1.78:1, Hercules is a solid high def release.

The 5.1 DTS-HD Master Audio is quite boisterous and engaging. The surround usage adds a fantastic layer to the experience and its effectiveness. The music quality is excellent. As to dialogue reproduction? The vocal clarity is excellent. This is an engaging mix with a solid presentation in 24 bit.

Subtitles are provided in: English, English SDH (for the deaf and hearing impaired), Spanish, Dutch, German, Portuguese, and French. 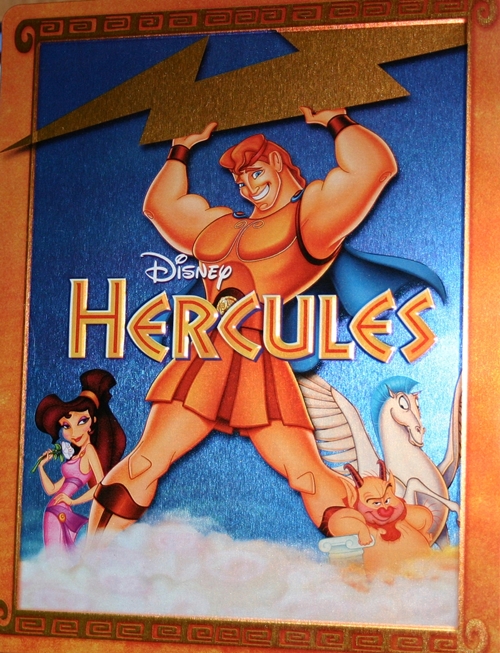 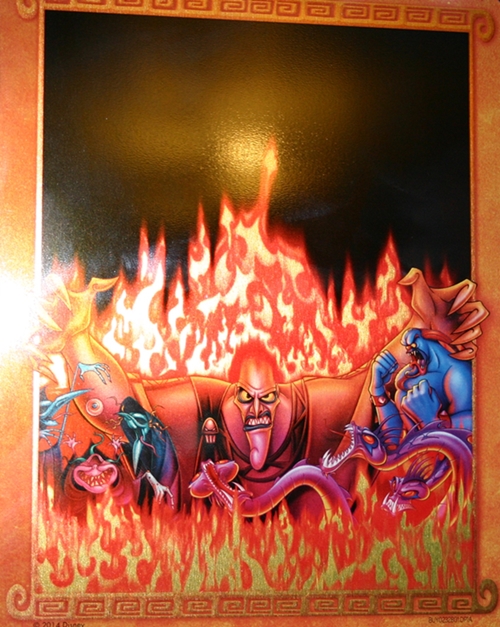 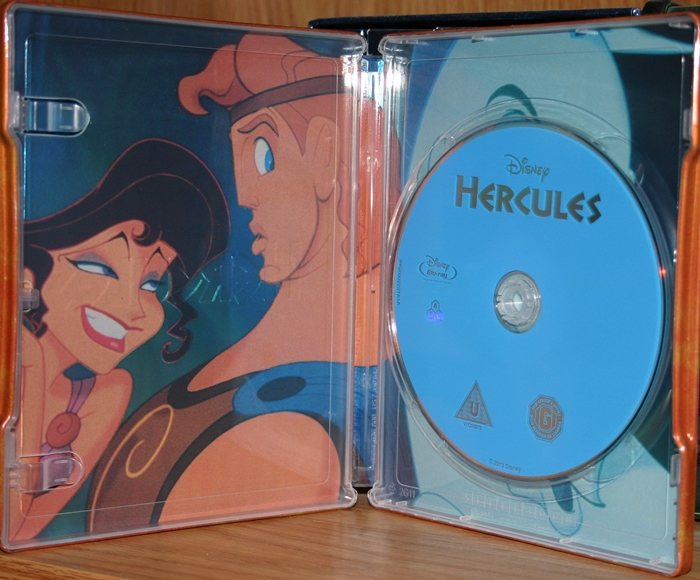 The Making of Hercules (9 min.) is an incredibly brief and fairly average promotional piece. Unfortunately, the edition does not included anything that is too in-depth about the film's production history. 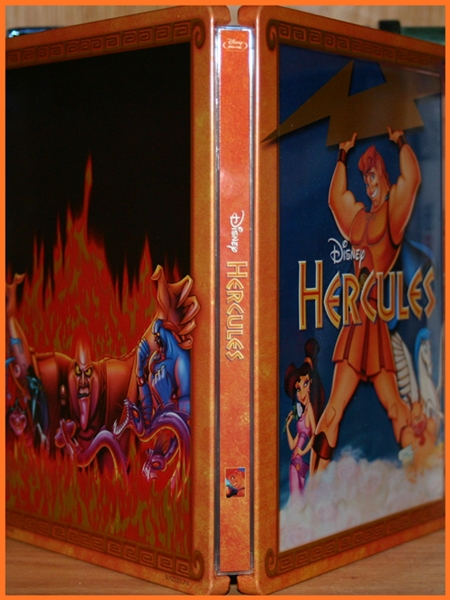 Hercules is often a film that I see people refer to as "second-tier" or "lesser" Disney but it's actually pretty darn close to being at the same level of quality found in the big classics of animation produced during the early 1990's. It's an incredibly entertaining, action-packed, comedic, and inspired romp that is a great work from filmmakers Ron Clements and John Musker (Aladdin, The Little Mermaid).

As for the merits of this Blu-ray release: picture quality and audio quality for Hercules have greatly impressed. The film has never looked better than it does with this High Definition presentation. While supplements are light, I wouldn't consider that to be a deal-breaker.

I enthusiastically recommend this Zavvi exclusive limited edition steelbook edition, which is a stunning release with lush glossy coating, embossing on the title, and a great dynamically rich color hue that makes it stand out from the crowd of other steelbooks. For a steelbook collector, the release easily earns top marks across the board. Disney fans and steelbook collectors should definitely consider adding this beautiful release to their collections.