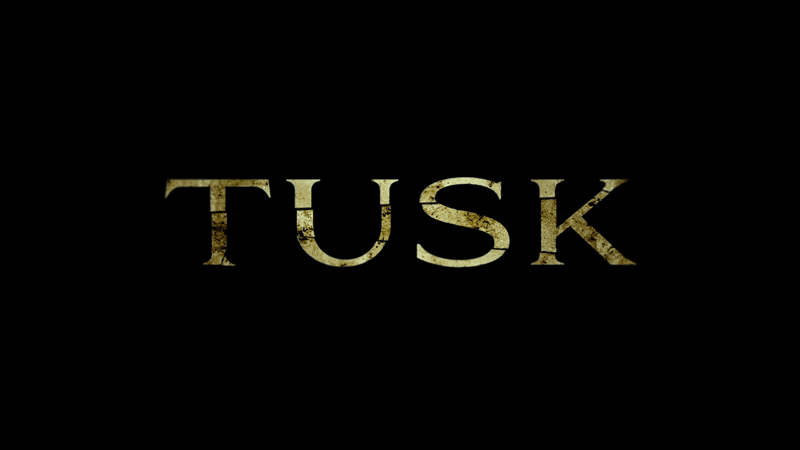 The Movie
Ask anyone who's known me since my college days who my favorite director is, and the likely answer will be Kevin Smith. You couldn't find a bigger fan than me, as I felt I shared a kinship with the writer/director of Clerks, as we were both overweight, hockey-loving film fanatics from the tri-state area with a love for the written word, who had been singled out by the Catholic League's Bill Donohue, and never did I feel closer to him than when I got the opportunity to work on the PR campaign for Dogma, and was rewarded in part with a personalized poster from the man himself. But then he left the east coast behind, moving to Los Angeles, and, worse yet, embraced the hated Oilers, the infernal foes of my dynasty Islanders.

Perhaps it's coincidence, but since that point, Smith has struggled to reach his earlier heights, and he's even lost the support of his one-time cinematic godfather Harvey Weinstein. Talk turned to retiring from directing and focusing on his other interests, like podcasting, but in doing so, he found himself drawn back into films, as a show with his production partner Scott Mosier, where they improvised the story of a man and a walrus suit, inspired him to give horror a shot, and the result is Tusk, the first in his True North trilogy of horror films set in Canada.

Tusk is so Kevin Smith it could be the first film released in a hockey jersey, as it combines so many of his loves. Wallace (Justin Long) is a podcaster who tracks down stories to share with his co-host Teddy (a noticeably larger Haley Joel Osment) on their show The Not-See Party (the name of which is easily the worst gag in the movie.) Visiting Manitoba in search of a viral-video star, Wallace learns of another interesting character, a man who offers lodging to someone willing to wear a walrus suit. Visiting him at his house, Wallace soon finds himself in over his head, and in the clutches of Howard Howe, a madman played wonderfully by Michael Parks (and matched by Long in effectiveness.) 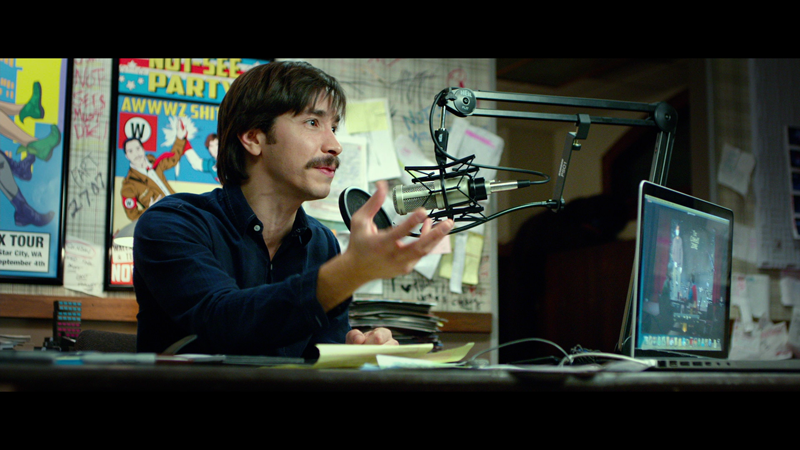 After a lot of set-up, linear and otherwise, in which we learn about Wallace and Howe, the movie gets down to it, as our hero gets surgically transformed into a walrus. It looks ridiculous in text, and it sounded ridiculous when spoken on the original podcast, but when you see it, it's a whole other level. Certainly a lot of work went into this creature, and it is undoubtedly original, but the first time you see the new Wallace, it's almost laughable. Yes, the idea, and the image of Long's transformed face, are completely disturbing, but the monster itself just doesn't look very good on film. A lumbering, rubbery, patchwork mess, the first revelation sucks most of the dread out of the movie, an atmosphere that Parks worked so hard at establishing with his truly evil character work.

As we get to watch Howe and his creation spend some time together (there is a decent, if loony backstory as to why this is all happening) Teddy and Wallace's girlfriend Ally (Genesis Rodriguez) try to track their missing friend down. This brings them into contact with the film's other key oddball, French-Canadian investigator Guy Lapointe. Now, I didn't realize it at the time, and had no idea who Guy Lapointe is, and if you don't know, don't go searching. Let it be a little surprise for yourself. Perhaps I'm dense for not picking up on it, but it's an interesting casting choice. It's also a somewhat empty part, existing mainly as a tool of exposition, as well as an opportunity for some hammy accent work and some rather fantastic conversations. Our mystery guest is certainly enough of a reason to give Tusk a look.

The oddest thing about Tusk has to be how effective its parts are, including excellent performances, well-done cinematography and moody music, yet it fails to add up to a solid movie, waylaid by the main creature, who is impossible to take seriously, seemingly through no fault of the filmmakers. It is a walrus after all. However the story, which sort of just floats through the course of film, doesn't help, especially when much of the movie feels like an excuse to have amazingly crazy cobversations. It's almost as if the plot was created by two guys riffing for a half hour. If you had lesser actors, this movie would be an incredible chore to get through, rather than the unusual genre movie it is. 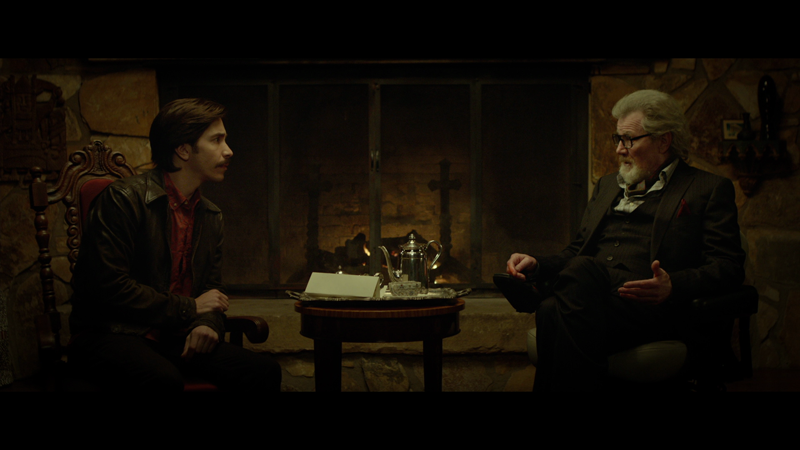 The Disc
Tusk arrives on one Blu-ray,packed into a standard Blu-ray keepcase. Disappointingly, the poster art wasn't used on the cover, swapped out for admittedly more appropriate exploitation-style art. The stylish animated menus offer a choice to watch the film, select scenes, adjust the set-up and check out the special features. There are no audio options, though subtitles are available in English, English SDH and Spanish.

The Quality
Kevin Smith films aren't known for their beauty (though I would argue that Jersey Girl looked fine and Chasing Amy excelled at an indie aesthetic.) Tusk is a different creature (pun intended), as it looks fantastic, with the work of DP James Laxton shining through on the 1080p, 2.40:1, AVC-encoded transfer. Unfortunately, the clarity of the image may be partially to blame for why the walrus looks so bad, as the video boasts very high levels of fine detail, appropriate color and flesh tones and deep, dark black levels that make the film's grimmer moments come through clearly. Digital distractions are not a concern, as everything is beautifully clean and problem-free. A great job.

The score, by the go-to composer for animated Batman music, Christopher Drake, does just about as much as Parks does to establish the film's creepy feel, with tunes that breath with a disturbing quality, and the surrounds help spread that icky feeling around the room well. You're not going to find a lot of directionality or dynamic mixing going on, but the pained howling of Long as Wallace are hard to forget when pumped through your speakers with the power this crisp, distortion-free track gives them.

The Extras
As is the norm, we get a commentary on this Smith film, a solo affair this time. Tusk may be too much of a personal manifesto to lend itself to the usual Smith fun, so the track is dominated by talk of the film's origins and what it means to him as a filmmaker (including the upcoming projects it inspired.) He frequently prompts the listener to chase their dreams, while also taking the opportunity to effusively praise his cast and crew. The main problems however are the massive stretches of dead air during the film's second half. Anyone who has heard Smith speak in any capacity knows this to be unusual, and seeing which scenes he doesn't talk during, it's easy to figure out the reason for his silence. It's unfortunate and really takes away from the track, as a major part of the production goes undiscussed (along with just a lot less of Smith's insight and wit.)

A 14-part look behind the scenes of the movie (originally available online) takes you into the set and into the production offices for a glimpse at the making of Tusk. Frequent Smith star Jason Mewes is on hand as a host/reporter to guide viewers in checking out the filming process, meeting the cast and crew and learning the wonders of Mac OS X. Though some are fluffy, like Mewes trying harnessed BASE jumping, there's plenty of good info here too (along with a frequently videobombing Long.) Combined (frustratingly without the aid of a play-all option) these pieces run 51:28, but you can shave seven minutes off that time, thanks to repeated intros and outros.

If you want more about the making of the film, "20 Years to Tusk" (24:27) fills in the gaps, as this interview with Smith touches on the film's origins, the effect of the film's budget, the influences of watching Pulp Fiction and making Cop Outand comparisons between his first film and his latest, which lead into some introspection on his career in film. For fans, this kind of thing is catnip.

There are two deleted scenes available to check out (12:19 together), each with a video intro by Smith, as he explains the cuts. Both feature animation, which had been a feature of Tusk, but which was eventually excised. Though neither was really necessary to the film, they change the feel of the scenes dramatically and are worth a look.

Finally, the SModcast that lead to Tusk, number 259, The Walrus and the Carpenter (29:35), is available to play over a static screen. Driven by the friendship between Smith and Mosier, it's a fun listen, as you hear their creatively just explode as they goofily craft the story.

Also in the package is a code for an Ultraviolet stream/download and a DTS Sound Check tool for calibrating your home theater. 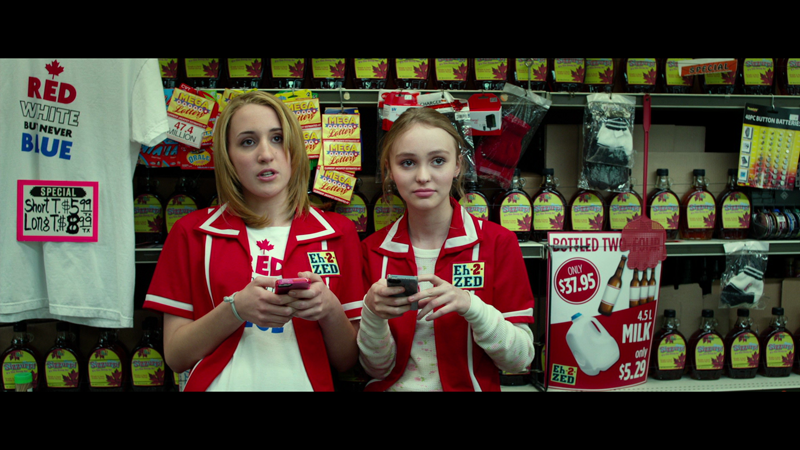 The Bottom Line
Tusk is a pretty-looking B-movie with heavy Kevin Smith influence, and works best as a playground for its lead actors to have fun on, as the story doesn't really go anywhere and scares are minimal at best. The blu-ray looks and sounds solid though, and there are enough Smith-filled bonus features for his fans to want to own it. For most however, a rental will be enough to check out the wonderful performances.