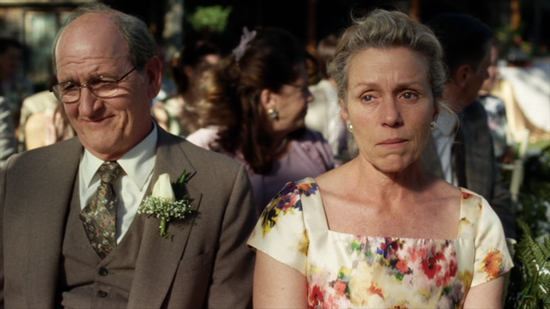 In the opening scenes of HBO's Olive Kitteridge, Frances McDormand is seen grimly padding out to a remote area filled with fallen leaves and bare trees. After finding an open spot, she lays out a blanket, tunes a portable radio to a classical music station, draws a handgun out of her purse, and points the weapon at her head. Over the next four hours, flashbacks reveal the complex world which this woman - Olive Kitteridge, no-nonsense retired Maine schoolteacher - carved out for herself, along with how she arrived at this desperate state.

From McDorman's feisty title character on down, Olive Kitteridge sympathetically deals with manic depression and people with damaged psyches. You might be correct in believing the series is a huge downer (often, it is), yet the material is sensitively handled with a surprising touch of mordant humor by screenwriter Jane Anderson (The Prize Winner of Defiance, Ohio) and director Lisa Cholodenko (The Kids Are All Right). The four episodes cover 25 years in Olive's life in the fictional seaside town of Crosby, Maine. Despite having a solid marriage and good job teaching at the local high school, Olive's unfriendly manner and sardonic bitterness has placed a wedge between her and everyone she knows. In the first installment, we get a good sense of the dynamic between Olive and her patient pharmacist husband, Henry (a marvelous Richard Jenkins), during a time when their union seemed most fragile. After an employee at Henry's pharmacy suddenly drops dead, he hires a bright, chatty young woman named Denise (Zoe Kazan) who opens his eyes as to what real, fulfilling relationships can bring. Though Henry's attraction to Denise is more of a fatherly thing, it arouses Olive's suspicions and causes more resentment for the Kitteridges' teenage son, Christopher (Devin Druid). Since he's also a student at his mother's school, Christopher is aware that his mother is carrying on a more-than-friendly repartee with another teacher, Jim O'Casey (Peter Mullan). This, and the fact that she's taking a special interest in a fellow student with a depressed, suicidal mother, increases the tensions between Olive and Christopher. The easygoing Henry can only do so much for this baggage-filled duo, so it stands to reason that he'd be captivated by a relatively simple person like Denise - especially after she has her own unforeseen tragedy to deal with.

Keep in mind that the above description only covers the first episode - the subsequent hours skip ahead a few years and deal with Olive coming to terms with her own depressive tendencies (her father committed suicide in the past, presumably at the same age she's approaching), trying to help out Henry and others in her own stick-straight, sensible way, and adjusting to Christopher's desires to distance himself the family (as an adult, Christopher is played by The Newsroom's John Gallagher, Jr.). Anyone who has dealt with depression in themselves or loved ones can sympathize with this densely packed - yet never manipulative - story. Olive's plight in particular is interesting, since she doesn't have the usual characteristics of being withdrawn and self-pitying. She does tend to lash out at others in passive aggressive ways (e.g., stealing a single shoe and earring from her new daughter-in-law), however. As fleshed out in McDormand's nuanced performance, Olive ultimately emerges as a quirky yet admirable person. I could see bits of myself, my mom, my mother-in-law, and my spouse in her.

Olive Kitteridge's screenwriter apparently streamlined things quite a bit in adapting Elizabeth Strout's Pulitzer Prize-winning novel to a TV miniseries format. While some of the subplots and minor characters came off as truncated, the show does well in conveying the many minute interactions between different characters sharing a small town over a long period of time. As in real life, characters that seemed significant in some episodes disappear abruptly (like Denise) while others hang around in the background and grow in stature gradually over time. In the latter case, a cigarette-addicted lounge singer named Angela (played by singer Martha Wainwright) seems to be in Olive's orbit over the long haul until they become unlikely friends (in Angela's case, at least - Olive likely wouldn't admit to having friends). The way they handled Angela here - mostly seen performing smarmy lounge-piano numbers that comment on the action - is one of the quirky, funny aspects of this series. Viewers may wonder why Bill Murray gets such high billing here, but his character figures prominently in the fourth hour, when Olive literally stumbles across his Jack Kennison - a former customer of Henry's - at a crucial time in her life.

Knowing how well she did with actors and a subtle, realistic milieu in The Kids Are All Right, I figured Lisa Cholodenko's work here would be along the same lines - that assumption proved to be correct. This is some terrific TV. 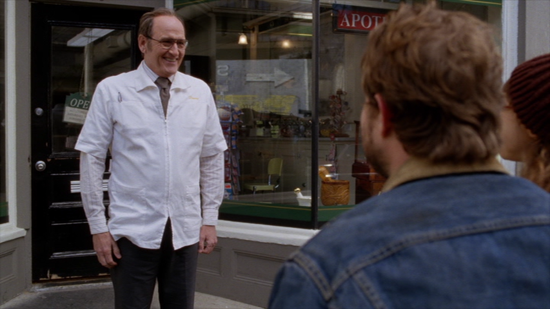 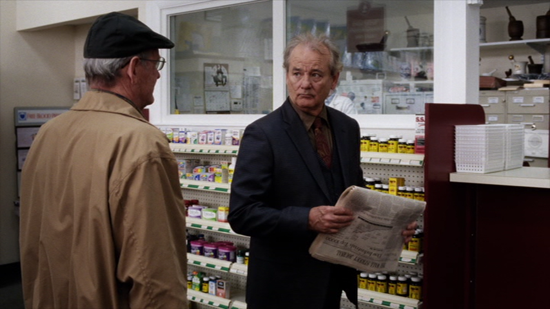 HBO's DVD edition of Olive Kitteridge comes packaged as a 2-DVD set housed in a standard-sized clear plastic keep case with paperboard slipcover. The first disc is mounted on a fragile hinged partition (the review copy's arrived broken), while the second disc is mounted on the case's rear interior. Episode titles, brief credits and plot synopses are printed on the interior of the case insert, which sports a nice photo of a Maine sunrise.

Olive Kitteridge's digital photography is given a good treatment on HBO's 16:9 anamorphic DVD. Colors are vibrant and lifelike, while the generous mastering job (two hour-long episodes on each disc) allows for naturalistic daytime and rich-looking nighttime scenes. There is a moderate amount of digital trickery here - tinting and that sort of thing - but mostly the visuals follow the same template as other made-for-TV dramas, serving the understated, realistic premise of the story.

The soundtrack is given a pristine, atmospheric 5.1 mix which doesn't often impress, although it's professionally done to match the understated visuals. The clear dialogue is incorporated with sound effects and incidental music in a pleasing, unobtrusive manner. Dubbed soundtracks in French 5.1 and Spanish 2.0 are also provided, as are optional subtitle tracks in English, French and Spanish.

The home video edition of something as thoughtfully made as Olive Kitteridge would have benefitted from director's commentaries or behind-the-scenes pieces. No such luck, however, as these discs are practically free of bonus stuff. Brief recaps are included on hours 2-4, along with auto-play promos for other HBO productions on the first disc.

Olive Kitteridge is not a woman to be trifled with. Not exactly upbeat viewing, but this riveting and sensitively done drama offers a quirky, beautifully acted portrait of a manic-depressive family. Frances McDormand has deservedly gotten lots of kudos for sympathetically playing the difficult, rigid Mrs. Kitteridge, but Richard Jenkins, Bill Murray and the rest of the cast benefit equally from Lisa Cholodenko's sympathetic direction. Recommended. 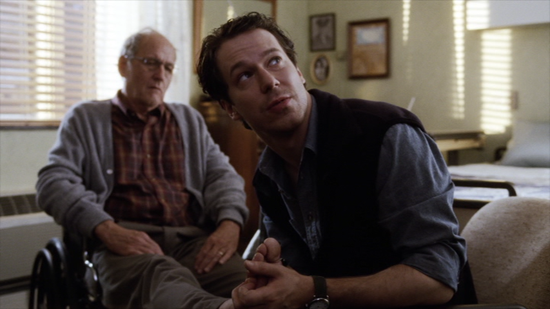 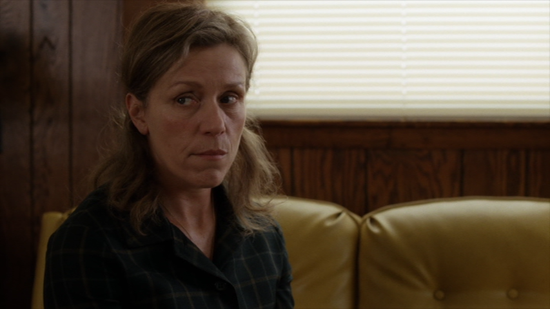