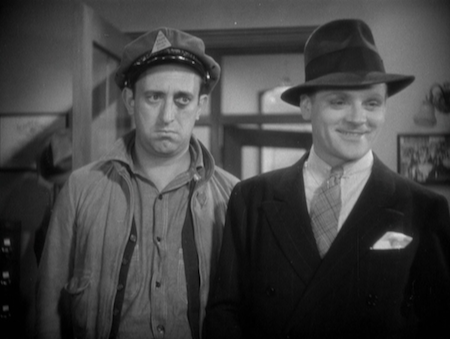 Fast-paced and funny, the 1934 film The St. Louis Kid offers James Cagney at his smart-aleck best. Cagney plays truck driver Eddie Kennedy, who, along with his short-tempered sidekick Buck (Allen Jenkins), frequently gets into fistfights that land him in jail. Not a big deal, until a minor altercation on the road eventually escalates into an all-out war between some milk farmers and the trucking company.

The clever script by Warren Duff (who also worked on Cagney's Frisco Kid and The Oklahoma Kid) and Seton I. Miller (The Adventures of Robin Hood) and the snappy direction by Ray Enright (Dames) both apply a screwball comedy rhythm and sensibility to a semi-serious story about striking workers (the film's Wikipedia entry even has this film not-quite-correctly categorized as a drama), which ensures that the film never gets bogged down or preachy.

The main thread of the story deals with Eddie managing to get himself out of one jail sentence in the fictional small town of Ostopolis, only to end up back in the town, stranded behind bars, a few short days later. Eddie headbutts a well-to-do businessman named Brown (Addison Richards) -- Eddie had already broken his hands in an earlier fight, see -- but he walks away scot-free after he convinces the milk farmer judge that he was striking a blow against the corporate interests Brown represents, who are squeezing the poor farmers out of their livelihood. Sure, it was a line of bull, but it worked. As luck would have it, though, Eddie's unintentional rabble-rousing instigates a farmer's strike in Ostopolis. Eddie's vindictive boss, Mr. Harris (Charles C. Wilson, It Happened One Night), sends Eddie and Buck on a run shipping out-of-state milk straight through that same small town. When farmers stop Eddie and Buck's truck and start dumping the milk, the pair dutifully defend their post -- and get the book thrown at them when they get arrested and hauled up in front of the same milk farmer judge.

The tone of this flick is consistently breezy, which makes it easy to watch, but it is also chock full of conflict. The writers clearly know exactly when to turn the screws on our hero. Before the end credits roll, there is a murder, a kidnapping, and a daring rescue. Yet, Cagney's carefree confidence as Eddie makes it impossible to expect he won't be able to wiggle out of whatever jams he is forced into.

Patricia Ellis (Elmer, The Great, Picture Snatcher) plays Ann Reid, the sourpussed dame whose tattletale tendencies are instrumental in getting Eddie in trouble, at first with the law in Ostopolis and then later with Mr. Harris back in St. Louis. Being that this film was made in the enlightened 1930s, all Ms. Reid needs is a good solid kissing to make her far more amenable to Eddie's rascally charms. To be honest, the picture has a more vibrant fizz when Cagney and Ellis's characters are at odds than when they get lovey-dovey, but they make a cute enough couple, I suppose.

The supporting comic players also deserve mentioning, for keeping a smile on my face from the first frame to the last. Besides the lovably goofy Jenkins, I quite enjoyed Spencer Charters as the good-natured jailer, Hobart Cavanaugh (whatta name!) as a woman-hating debtor who shares a cell with Eddie and Buck, and Arthur Aylesworth as the completely biased judge.

There's never a dull moment during The St. Louis Kid's trim 67-minute run time. This flick has got laughs, action, and a bit of romance, plus a smooth and sassy star turn from James Cagney. Who could ask for anything more? 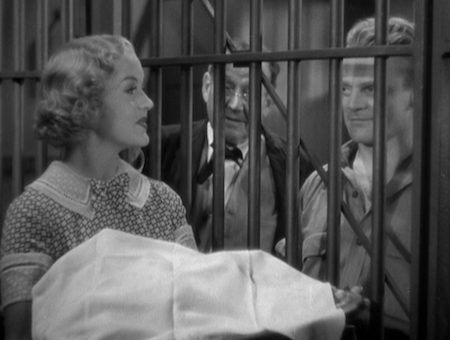 The DVD
The St. Louis Kid comes as part of Warner's Archive Collection on a manufactured-on-demand DVD-R.

The Video:
There are a lot of white specks and scratches throughout this standard 1.33:1 presentation. The specks are distracting at first, but eventually become an organic part of the viewing experience. The transfer otherwise has solid detail reproduction and nuanced contrast.

The Audio:
I didn't notice anything particularly awry with the Dolby 2.0 mono audio apart from the expected boxiness and maybe some subtle hiss. Otherwise, the dialogue is perfectly comprehensible and the music and effects sound OK too.

Special Features:
Just a trailer that is too wacky by half. It also ends on this strange semi-hard sell: "Is it COLOSSAL? NO! Is it Darned Good entertainment? YOU BET IT IS!"

Final Thoughts:
The St. Louis Kid may not be a Great Movie, but it sure is start-to-finish fun. Pop up some popcorn and pop in this disc. Highly Recommended. 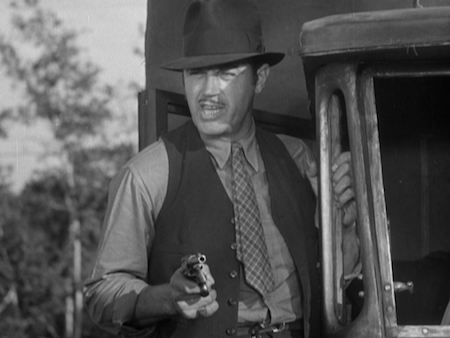