WWE Ladies and Gentlemen My Name is Paul Heyman


The great part about the WWE's manager Paul Heyman is that he may be one of the last great links to professional wrestling's heyday. If he does not know where the bodies are buried or the skeletons are, it is because there is a good chance he has a key and will not tell anyone anything. The fine folks are WWE Video turn their attention to Heyman, with a three-disc set titled Ladies and Gentlemen, My Name Is Paul Heyman, and the result may be one of the better detailed pro wrestling sets in recent memory.

Not even 50, Heyman recounts the days of running his own mail order business for entertainment memorabilia when he was 11. He then moved into photography, with his main subject being wrestlers of the then-World Wrestling Federation, when Vince McMahon's father used to run shows in the late ‘70s and early ‘80s. By the time he barely crossed the legal drinking limit, he was traveling through several regional territories, and even was on the American Wrestling Association. With their broadcast deal with ESPN, his visibility soared even more. 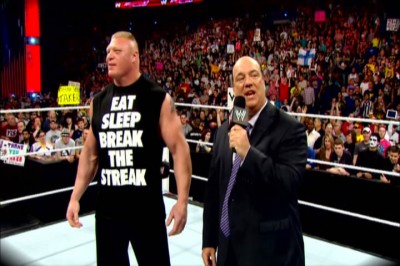 With Heyman's aspirations, the only thing dwarfing them was his intensity and desire for perfection. He bumped into disagreements with his bosses on more than one occasion (Vince McMahon Jr. even fired him at one point in his career), and he used money he received when countersuing World Championship Wrestling to help shape a promotion that would later become Extreme Championship Wrestling (ECW). While he pushed the boys in the back to do their very best, he was often their biggest supporters, with wrestlers like Chris Jericho, Chris Benoit and Cactus Jack among others either finding their footing or regaining it for another run at the majors.

While Heyman's passion got him in trouble with the McMahons, they did manage to see his drive and desire as a net positive. Heyman was eventually brought back by Vince Jr. and given the chance to focus his skills with the developmental Ohio Valley Wrestling, where he met a similarly driven wrestler named CM Punk, and the two helped carry one another back to the WWE and into household familiarity. Using interviews with Heyman, Punk, Edge, Mick Foley and others, everyone discusses Heyman's merits and faults, along with Heyman himself.

There is something about this feature the more we go along in that some of Heyman's behavior and mechanisms that are emblematic of what went on in professional wrestling through the years. One story that is not included on the feature was one where Heyman recalls his dismissal from the WWE, and McMahon's daughter Stephanie shares her side of the story and Heyman his. Considering some of the things that Heyman had to do to keep ECW afloat at times it seems hardly a surprise, but he has had to do much to stay alive in the business he loves, and to a degree he cannot be faulted for it.

To Heyman's credit and the credit of others, he does discuss how he has mellowed over the last several years. In a way, keeping Heyman as a manager upon his return (after he left for several years to help run an online advertising agency) was the best thing Heyman could do. By not allowing him back into the circle of handling bookings or doing commentary and exposing himself to the rigors of the road, he stays away from some of the demons of bad behavior, and this limit allows him to be focused on doing what he loves; working around professional wrestlers, being a manager, having an arena full of fans hate his guts. Some of the feature shows his tender side, showing that he is not the type of person anymore because of his endeavors or family. Ultimately, Heyman is happy where he is right now, and seeing him as a locker room sage is a little weird speaking as one who saw him cutting those AWA promos. Then you realize he's spent more than three quarters of his life around wrestlers and you realize it makes perfect sense. 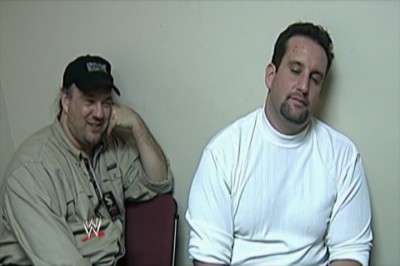 Ladies and Gentlemen, My Name Is Paul Heyman tells an excellent story of a guy who threw himself headlong into professional wrestling and has come out pretty good for it, but also still around it because it is something he loves dearly. The end of the feature ponders whether Heyman could be considered the greatest manager in wrestling history, and for a guy who has been around Freddie Blassie, Jim Cornette, Lou Albano, and his work as a manager is reflected as a who's who of wrestling talent that includes Punk, Steve Austin and all-star card of others, it is hard to disagree.


The WWE generally does excellent work on the material that they display. Combine that with Heyman's archives and the result is pretty to look at. It juggles a variety of footage over several decades, and still photographs which are older in some cases. It is reproduced faithfully as can be without color or image processing or edge enhancement. The modern interviews look as sharp as can be and the old stuff (particularly the WCW footage) looks really nice. All in all this is a solid set.


The feature includes a Dolby Digital 5.1 surround track that does pretty much what was expected of it, with Heyman's filmed interview audio sounding excellent, and the vintage video sounding just as good. Virtually all of the sonic action is in the front of the soundstage so prepare for that, but otherwise the feature is a good listen.


Well this is tough to measure. Compared to other wrestling sets, you do not get three discs of matches from various decades and years to pore over. Because Heyman is a manager you get promos, a virtual boatload of them, as he has done them through the years, beginning with his AWA ones from the 1980s. There are matches, three in total, but nothing but promos, along with some stories that the feature does not include. And those stories are pretty good. He talks about fending off the ‘invasion' while he was at ECW, but also goes into detail about a story where the teenaged Heyman gets a ride home from Freddie Blassie one night from a Madison Square Garden show. It is mind blowing to see how Heyman at his age has his own stories about the old-timers that are well worth the enjoyment.


The only drawback of Ladies and Gentlemen, My Name Is Paul Heyman is that is does not have a stellar match lineup to go with an excellent program. The first disc feature is among the best this reviewer has seen from the WWE video folks, and the stories on the second disc, while brief, damn near justify a Volume Two of Heyman's career in and of itself. If you are a fan of professional wrestling, this one is appointment viewing.