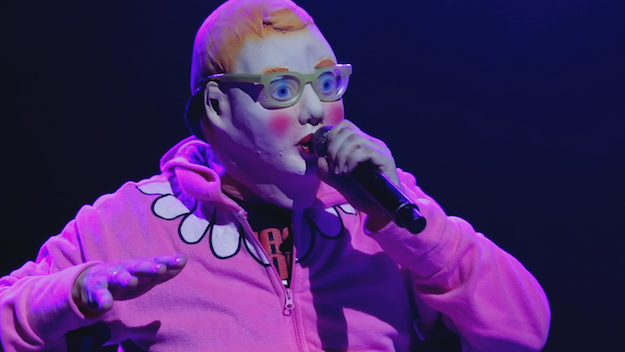 Back in 2013, those renowned purveyors of spastic new wave rock, Devo, reissued Hardcore Devo, two albums worth of 4-track demos and other lo-fi recordings from 1974 to 1977 (i.e., before they scored a major label record deal). They planned to do a 40th Anniversary tour in which they would only perform songs from these "basement tapes." (As guitarist Bob Mothersbaugh says in an interview from the new concert video Hardcore Devo Live!, "I'm tired of playing 'Whip It.' ") When guitarist/keyboardist Bob Casale (aka "Bob 2") died in early 2014, the band had to regroup slightly. Eventually, they decided that rather than find someone else to play Bob 2's parts, they would just strip down to a 4-piece (most of these early songs weren't written with discrete rhythm and lead guitar parts anyway).

Hardcore Devo Live! was captured at the Fox Theater in Oakland, CA, during their 2014 tour, and it's easily one of the band's finest concert video releases. As Devo's previous reunion videos have proven, they may not have the physical agility and stage presence of their '80s heyday, but they are still a tight, fierce rock band. The novelty of the rarely-played material keeps the fellas from drifting into autopilot, but lead singers Gerald Casale (who also plays bass) and Mark Mothersbaugh (who also does the analog synths) seem like they are most in their element when the band sprinkles in a handful of tracks from the typical repertoire that are still era-appropriate, like the energy-blasted "Uncontrollable Urge" and the band's beloved, devolved cover of the Rolling Stones' "(I Can't Get No) Satisfaction."

The show is structured in what is purported to be chronological order (a much harder-core Devo fan would have to tell you whether or not they actually stick to history here or not). It begins with the band sitting on stools in front of a basement set that is supposed to approximate their old practice space. The band isn't particularly demonstrative during this first half-hour section, although they sound great -- far more powerful and exciting than the tinny original recordings -- and director Keirda Bahruth finds ways to cover the band that maintains a solid energy level for the viewer. It is also apparent in this section that, despite some squeaks and squelches from Mothersbaugh's synths, the music the band was initially working up often had a solid foundation in "normal" rock 'n' roll and R&B. In the chosen songs from this earliest period, the lyrics seem to be the most devolved aspects of Devo's music. For example, if you took away "Auto Modown"'s lyrics, which are full of gory descriptions of a hit-and-run accident, you could imagine a straightforward, Led Zep-loving garage band turning out a similar blues-rock groove. And while the tasteless lyrics of "Midget" make it clear that the song is intended as a funk pastiche, the actual musical composition shows few signs of de-evolution. Not that that's a knock; as I said, the band sounds beefy and fantastic on these songs, with newer drummer Josh Freese (The Vandals, A Perfect Circle) propelling each number with confidence.

After that first half-hour, though, everything changes. The band puts on light-blue jumpsuits like the ones they wore in their breakout short film/music video, The Truth About De-Evolution. They get off their stools and on their feet. The basement set becomes a more stylized flashing-lights-festooned rock show backdrop. The tunes get more angular, more spasmodic, more fully devolved. Beloved early-album cuts like "Jocko Homo," "Gut Feeling," and "Clockout" are given rambunctious readings, but the lesser-knowns are just as impressive. "Social Fools," with its observation that society's rebels inevitably become the very establishment that they rail against, anticipates both the message and the militaristic stomp of "Freedom of Choice."

The only significant flaw in this concert film is the decision to lay in interview snippets with the band and a few admirers, like zine publisher V. Vale and singer/choreographer Toni Basil. Very little of what any of these folks have to say provides significant insight into the concept, the style, or the impact of the band that isn't better articulated in a hundred other places. Plus, director Bahruth sticks these clips not only between songs, but also over instrumental passages within some songs. Hey, I actually want to hear that stuff!

That annoying creative decision aside, Hardcore Devo Live! is a smashing success. It's both a wonderful paean to the band's creative past and an energetic, engaging rock show. I'm sure a lot of bands would like to think it would be interesting to fish out their old unreleased songs and trot them out onstage, but it's doubtful that the results would be nearly as entertaining as this. 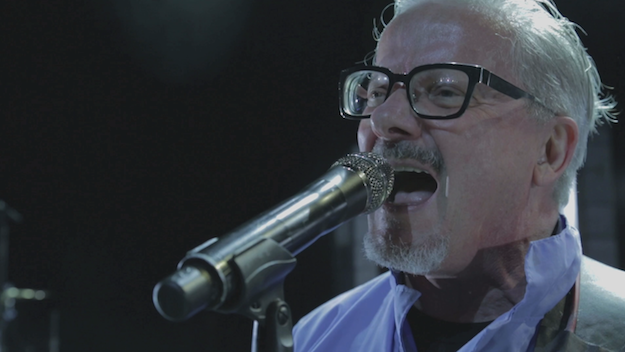 The Video:
The clarity on this AVC-encoded 1080p 1.78:1 presentation is excellent. The fine detail is so good, that on some shots taken from behind the band, you can make out faces way out in the back of the audience. Color and contrast are solid but a little more variable. This seems to be the fault of camera calibrations. Certain camera set-ups seem consistently more washed-out or alternatively more crush-y and dark compared to the other camera positions throughout. It's not a severe distraction, but it's easy to spot these fluctuations without too critical of an eye.

The Audio:
Most importantly, the LPCM 2.0 stereo mix is a freakin' BEAST! This track offers a clean, gutsy, full-range mix that is hands-down the best I have heard recorded for one of this band's concert films. No subtitles.

(HD, 1:23:22) - The good news: here's a version of this film without those pesky interviews. The bad news: it comes with a compressed, quieter soundtrack. The bitrate is decent for a compressed option (640 kbps), but it's still a starkly noticeable step down from the lossless feature presentation.


Final Thoughts:
For fans of Devo or new wave rock in general, this is a fantastic concert video. Rather than just cashing in on nostalgia for their '80s hit(s), the band found a creative way to celebrate its past and make it new. The Blu-ray presentation looks good but sounds amazing. If only that concert-only option was available with uncompressed audio too... Ah well, the disc still comes Highly Recommended. 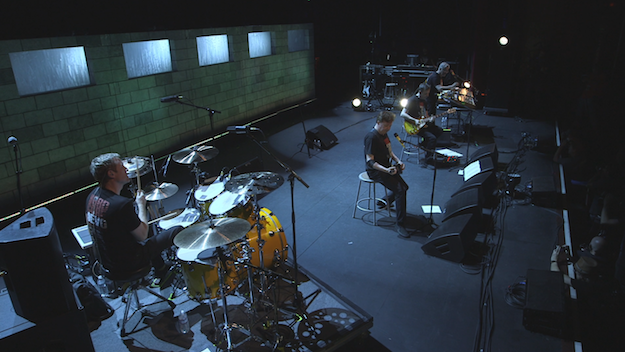