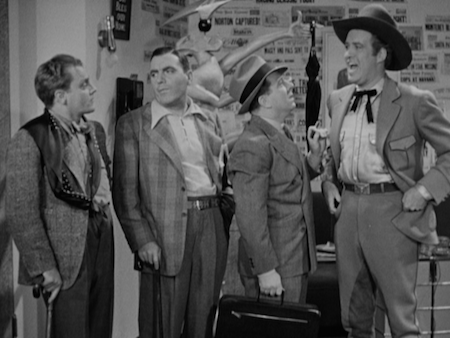 James Cagney and Pat O'Brien are top-billed in the 1938 Hollywood-set comedy, Boy Meets Girl, but the film is really an ensemble piece in which Warner Brothers' Irishmen-in-residence add offbeat color to the satirical proceedings, as a kind of two-person redux of the Marx Brothers. In fact, comedians Olsen and Johnson (of Hellzapoppin' and Oh, Sailor, Behave! infamy) were originally slated to take the roles that Cagney and O'Brien ended up filling, which helps explain the broadness and semi-peripheral nature of their characters.

Washed-up cowboy actor Larry Toms (The Petrified Forest's Dick Foran) needs a hit or else the studio won't renew his contract. His agent, Rosetti (Frank McHugh), figures he knows just the writers to cook up a fresh story to get Larry back on the horse: Robert Law and J. Carlyle Benson (Cagney and O'Brien, respectively). Modeled on the real-life screwball scribes behind The Front Page and Twentieth Century, Ben Hecht and Charles MacArthur, Law and Benson are cynical and bored, and they certainly want nothing to do with Larry Toms's fledgling picture. That is, until they strike upon the solid-gold idea of pairing Larry with a baby -- the unborn baby of charming ditz Susie (My Friend Irma's Marie Wilson), who works in the studio commissary.

Though the jabs Boy Meets Girl takes at the movie business are usually pretty mild, the conceit that Benson and Law would sell Susie's baby-to-be, whom she has already named Happy, to the studio -- before he is even born! -- is one of the few edgy satirical moments that maintains its bite to this day. As the mercenary screenwriters describe how every moment of Happy's little life will be documented for fan magazines and studio publicity, one can see the foundation of today's "reality"-obsessed pop culture already taking shape seventy-five years ago.

If only the film were that consistently sharp and funny. Instead, Boy Meets Girl has many charming moments and witty lines that only sporadically pop up throughout what is basically a needlessly busy, toothless take on showbiz. Even though the title sarcastically refers to the cliché that movies are just "Boy meets girl, boy loses girl, boy gets girl," the film delivers that precise trite subplot with a straight face, by having Susie fall for a down-on-his-luck bit player named Rodney (Bruce Lester). As befits this inconsistent movie, lovebirds Wilson and Lester are quite enjoyable during their meet-cute scene, but the rest of their shared time on screen is deadly dull.

On the plus side, Ralph Bellamy is brilliant as C. Elliott Friday, the film's affectionately mocking vision of producer Darryl F. Zanuck, who is juggling numerous projects and frequently ends up the butt of Benson and Law's pranks. Ronald Reagan also scores a hilarious one-scene role as a radio announcer who ends up directly in the middle of a movie premiere riot, engineered by those wascally wordsmiths. Cagney and O'Brien also wring plenty of laughs out of their roles, but unfortunately the amount of scenes in which their characters' slacker hijinks are stultifying is about equal to the scenes in which they are electrifying.

Boy Meets Girl was written for the screen by Bella and Samuel Spewack (the team who later wrote the book for the stage version of Kiss Me, Kate), based on their own hit play. Lloyd Bacon's atypically slack direction does little to disguise the material's stagebound origins, which certainly contributes to the stalled momentum of the version we have here. Then again, I'm not familiar with the play, and maybe it is a top-to-bottom riot that got watered-down on its way to the screen. Considering that the story involves Hollywood satirizing itself (which it's not always great at) and involves a leading character who is an unwed mother (which probably drove the Hays office batty), it very well could be dilution that made Boy Meets Girl such a wishy-washy flick. 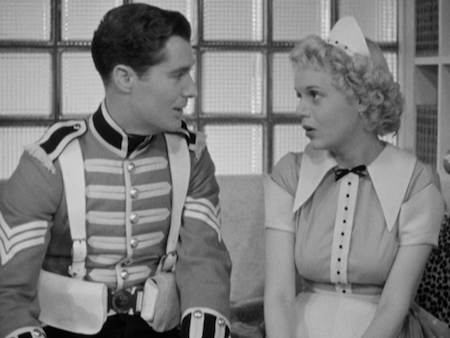 The DVD
Boy Meets Girl is part of Warner's Archive Collection, manufactured on demand as a DVD-R disc.

The Video:
There are some occasional appearances of dirt, speckles, and scratches in this standard 1.33:1 presentation, but in general this is a high-quality transfer. A high level of detail, good contrast and brightness, and no egregious digital artifacting.

The Audio:
Like the video, the Dolby 2.0 mono audio is in quite good shape. There is a little bit of hiss and crackle noticeable throughout, but only if you're really listening for it.

Final Thoughts:
There's a lot to enjoy in Boy Meets Girl, but the unfocused script and indifferent direction frequently kills the flick's momentum and traps too many laughs inside viewers' throats. Still, I didn't think it was total waste of time. If your interest is piqued, Rent It. 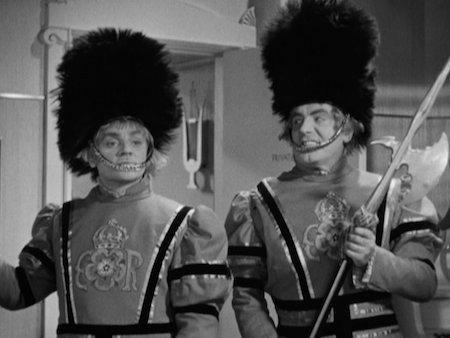