I quite enjoyed The Bridge during its first season in its retelling of a Scandanavian show focused on the United States-Mexico border. Then a funny thing happened between Seasons One and Two, where Meredith Stiehm returned to take the creative reins over Homeland, which left co-show runner and collaborator Elwood Reid on his own, facing a second season which made it a longer-running adaptation than its Danish-Swedish forefather. So what are the results?

The core of the show still remained fortunately. Sonya Cross (Diane Kruger, The Host) is still working in El Paso and is still being cared for to some degree by Hank (Ted Levine, Monk), while Sonya's pseudo crime fighting partner Marco Ruiz (Demian Bichir, A Better Life) went from Chihuahua to Juarez, still trying to pick of the pieces of his life that were shattered from the first season. Moved into the series regular roles for the season are Daniel (Matthew Lillard, She's All That) and Adriana (Emily Rios, Quinceanera), who are trying to crack stories involving drug cartels. A notable addition to the cast is Franka Potente (The Bourne Supremacy), who plays Eleanor, a very tattooed and mysterious person looking to clean some loose ends up. 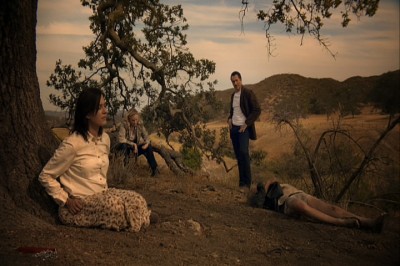 Some of the supporting characters who appeared in Season One also come back to the fold, such as Charlotte (Annabeth Gish, Mystic Pizza), who went from shocked widower to increasingly important drug trafficker. Or Fausto (Ramon Franco, Heartbreak Ridge), the cartel boss who worked with Marco, serving as the conscience with a very illegal side, who could do things for Marco if Marco would surrender his intergrity. There is also Linder (Ramon Franco, She's All That), who will still looking and sounding creepy, has a return that feels a little more muted than the others. All your favorites are back in a season that to paraphrase Reid is one where they attempted to expand the border from Season One the tiniest little bit.

The problem that seems to plague The Bridge as this expansion goes on is that it seems to be a little bit haphazard, bouncing between expanding the universe of their characters incrementally and convincingly, with one that gets a little too blustery for its own good. On the latter, this results in boring or even insulting the viewer because there had been little to suggest that some of the conclusions being drawn were reasonable. One character is the beneficiary of a battle between two government bureaucracies, and this free reign also has a thrown out of left field personal motivation that was bizarre to include in the show to that point. Additionally, I think that Reid had to know during the season that The Bridge may not have been long for the world. After the first episode (which coincidentally was the introduction of Eleanor, folks tuned out quickly and drastically, myself included.

Additionally, as I went through the second season, I found myself becoming less and less enamored with Kruger's performance. In season one, Sonya had Asperger's (though I don't recall it being mentioned), but as her character evolved and these symptoms diminished, you could almost sense it in the world. It became something that translated poorly to the screen. Bichir had the heavier lifting again in this season and he did fine, though some of the things thrown at him near the end diminished the evolution of the character. He had the luxury with working occasionally with his brother Bruno, who played Sebastian, an ambitious attorney in Mexico who has a drug-addicted teenaged daughter, not unlike either incarnation of Traffic from a few tears ago.

I enjoyed Lillard's emergence in the first season of the show, and in the second season there was little to diminish it. There were fleeting moments of bluster as he was dealing with the effects of dealing with sobriety (watching him and Brian Baumgartner, a.k.a. Kevin from The Office rock out to Rush while falling off the wagon together as addict and sponsor is funny and subsequently poignant to a degree), and finding newfound vigor into the journalist work that earned him the reputation he previously took advantage of remains impressive. 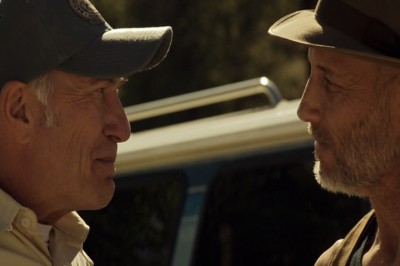 Ultimately, The Bridge has a moment or two that reminded me of the first season and why I liked it as much as I did. But weirdly enough, it seemed that when Stiehm left, there was a predilection for sensationalism that was something the show was not prepared for or comfortable in doing and it showed. It seemed to know where it wanted to be at the end of the season, but how it got there was less important, and it paid for it.


The thirteen episode second season of The Bridge is spread over four discs and presented in 1.78:1 anamorphic widescreen, consistent with their original airing format. Colors look great and accurate, though there is a moment on the third disc where the opening pre-credit scene packs a bunch of noise in the frame (when Eleanor was in the convenience store). It is hard to say definitively if this was deliberate as it disappeared after the credits finished airing, but it was distracting enough to mention. Otherwise, the episodes look solid and are free of other issues.


The show gives us Dolby Digital 5.1 surround sound over all the discs and the results are damn fine. The Bridge has more gunplay than I recall it having and it sounds fantastic during the ample firefights that pepper the season. In less sonically dynamic moments, the show sounds decent, though lacks directional activity until the big bangs and flashes. Despite the inconsistency in the quieter moments, the show sounds generally good over the course of all four discs.


There is a recurring extra called "Building The Bridge," which is essentially a series of three to four-minute segments on the making of each show or characters that make their first appearance in the show. Altogether the pieces total just under an hour (52:20), but they are interesting quick hits that do not get too involved into the material. The only other extras are on Disc Four, starting with "Blurring the Border Line" (10:40), which sums up Season One as best as possible and introduces Season Two, some of the intents and new cast involved. Challenges for the cast and crew are recounted and some of the merits are touched on. Like the other pieces they are decent though superficial. Four deleted scenes (5:51) do less than the other extras did, which I hope says it all.


Like a lot of other shows that follow a similar formula, The Bridge went out with more of a whimper than a bang, and did itself few favors in Season Two. Those who helped give the show some gravitas in front of the screen did not completely go in whole hearted and you can sense it while watching, to say nothing of those with a blank canvas to go with. Technically, the show was fine generally, and from a bonus material perspective was a little light. Farewell The Bridge, you were fun while you lasted.