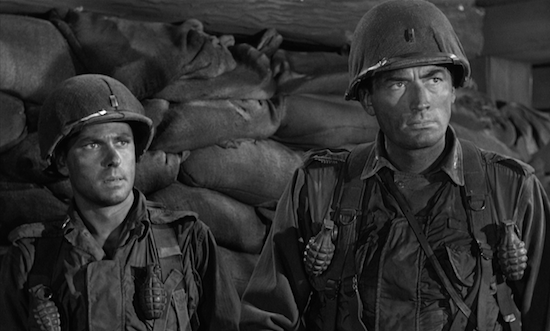 Pork Chop Hill is an excellent Korean War-set combat film from 1959. Like Sam Fuller's Fixed Bayonets! and Anthony Mann's Men in War before it, Pork Chop Hill puts us on the ground with a group of G.I.s facing an impossible mission that's all risk for questionable reward. The big difference here is that the Battle of Pork Chop Hill really happened, while a truce was being negotiated between the United Nations, Korea, and China, in nearby Panmunjom. This turned the battle into a political game rather than a tactical military action.

Directed by Lewis Milestone, who helmed the granddaddy of all anti-war combat pictures, All Quiet on the Western Front, this film also shows the folly of war without being an overt message movie. "No use trying to figure it out, you just have to keep on going," star Gregory Peck says at one point, as Lt. Joe Clemons, after one of his men has just found his buddy blown to pieces. Clemons has a little bit of trouble sticking to his own advice, as inevitably doubt creeps in about why they are taking the hill or holding it. It offers no strategic advantage, and Clemons -- like his superiors -- is uneasy about leading his men into a slaughter over a piece of land that might just get turned back over to the Communists in a peace agreement the next day.

More often than not, Clemons is able to push his doubts aside. If the Communists are so eager to fight for this piece of land, then that is its innate value, he decides. Unfortunately, his superiors don't commit in the same way, leaving him and his men fighting for days with inadequate support and supplies. The men are constantly taunted over loudspeakers, Tokyo Rose-style, to surrender; even though it's clearly a trap, it's hard not to be swayed for a moment that maybe it would be better for the men if they just gave up.

The cast is loaded with familiar faces, even if some of them only make a fleeting impression. (Reportedly, the initial cut of the film was about twenty minutes longer, so more time possibly could have been spent with more individual men.) Robert Blake plays a young soldier who's maybe a bit too green for combat, but ends up making the best of it. Woody Strode, from Spartacus, plays a character who constantly tries to bow out of the fighting, as he has no interest in getting killed over a silly plot of land. Real-life West Point man George Shibata makes a great impression as a Japanese-American lieutenant who struggles to lead the men alongside Clemons. Rip Torn, George Peppard, Norman Fell, James Edwards, Gavin MacLeod, Martin Landau, and an uncredited Harry Dean Stanton all make memorable appearances too.

The combat scenes are exciting but chaotic. There are few moments of fighting that feel truly victorious, because you never know what's coming next. The fellow you were just making wisecracks with could catch a shell and be dead a moment later. That grenade you just threw might ricochet off a bunker and come back at you.

Pork Chop Hill ends with a voice-over by Gregory Peck, seemingly out of character, praising the heroism of the soldiers who fought at Pork Chop Hill and declaring that their efforts allowed millions of people to live in freedom. It's the rare false note, clearly a concession to the U.S. Army or someone else important who didn't like the film's ambiguous attitude toward the battle. The film never loses faith in the fighting men on the ground, which is largely why it's hard to buy into this rhetoric created by the fellas farther up the chain of command. 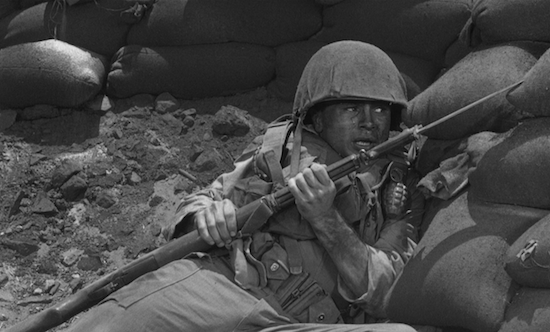 The Video:
This is an outstanding AVC-encoded 1080p 1.66:1 presentation. Granted, there are some unscrubbed specks of dirt and even a few scratches on the image, but these are minor drawbacks to what is a beautifully detailed transfer. The tight, attractive look of the film grain is complimented by nuanced contrast, deep blacks, and solid shadow detail. I spotted no significant digital compression issues either.

The Audio:
Guns fire, shells explode, men mutter. It all comes through sounding clear and forceful in this DTS-HD MA 2.0 mono track. As DVD Savant noted in his review of the film, the score by Leonard Rosenman works fine for the most part, but kicks off with a needlessly racist theme based on the Oriental riff -- one of the film's other rare false notes. The disc offers no subtitles. 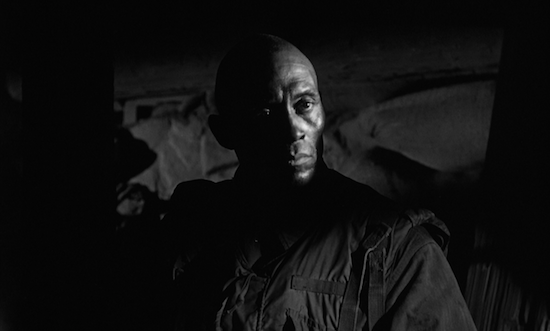