The photos below are taken from various internet sources and do not necessarily represent the quality of the Blu-ray under review. 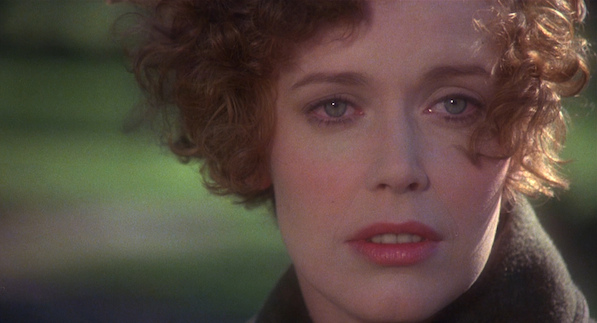 Most of the reviews I read online to prep me for my first viewing of Just Jaeckin's 1981 film adaptation of D.H. Lawrence's controversial erotic novel, Lady Chatterley's Lover, are fairly brutal. The D.H. Lawrence fans knock Jaeckin for dumbing down the source material in favor of soft-focus, softcore nonsense. The nudie flick fans are mad that the film strains so hard for respectability that it sucks a lot of the dirty-movie fun out of the whole enterprise. In his review of the DVD release a decade ago, DVD Talk's Adam Tyner called the film "profoundly boring." Needless to say, I was ready for a real turkey.

But, as someone who has never read D.H. Lawrence and has seen neither Emmanuelle nor The Story of O, I had no expectations to be diminished.

And maybe that's why I ended up mostly enjoying my time with Lady Chatterley's Lover. It's not particularly clever or even very consistent, but it delivers some solid dramatic sequences, gratuitously extended shots of star Sylvia Kristel's naked body (and a generous helping of costar Nicholas Clay's anatomy as well), and more than a few unintended giggles when things get campy. For a mixed bag, that's not a bad mix.

Kristel plays Constance, the new bride of aristocrat Clifford Chatterley (played by Shane Briant and his giant eyebrows). Life is looking bright for the new couple, until World War I is declared and Clifford is sent off to fight. Ol' Cliffy catches some shrapnel in battle, which knocks out his legs and puts his love gun out of commission. The once-vivacious Constance now has to play nursemaid to her invalid husband. Cliff feels bad about it, so he throws her a bone: she can take a lover if the opportunity ever arises. Also, if she ever gets pregnant, that's alright. Cliff wants an heir and he can't father any big-eyebrowed children himself anymore.

This is all well and good in the hypothetical, but then things get a bit more complicated once Constance actually finds a fella she fancies. In a scene that busted me up in hysterics, Constance stumbles upon the Chatterleys' gamekeeper Mellors (Clay) stripping down and soaping up, which she finds to be the most erotic thing she has ever seen in her life. (For me, it was just a goofily staged, sex-reversed retread of the millions of scenes that have been filmed where a peeping tom spies on a lady changing or showering.) After much hemming and hawing, Constance and Mellors commence their clandestine affair. (I do somewhat agree with my DVD Talk colleague that the twenty minutes or so that elapse between Constance's first glimpse of Mellors's wang and their first rendez-vous is quite draggy and boring.) Clifford, who spends his time either working out in physical therapy, looking at his financial records, or just glowering generally, becomes quite suspicious and jealous.

One of the best sequences in the film comes about a half-hour from the end. Mellors has asked Constance to spend the night in his cottage for once, instead of sleeping alone in the main house. (Though arguably the chemistry between Kristel and Clay waxes and wanes throughout the film, they seem really sweet and romantic together in this section of the film. The sex scene in this section is also the one that most closely approaches genuine heat, while the rest are blunt but bloodless. Kristel has a self-pleasuring scene in the movie that is pretty sexy, although it climaxes with flashbacks to Clay's soapy butt, forcing me to crack up all over again.) Meanwhile, in the main house, Clifford awakes in his bed. He sleeps one floor below Constance, and is suddenly inspired to check on her. As he drags himself up all those stairs with his rehabbed arms, we know he's going to find an empty bed. Still, Jaeckin allows us to climb all those stairs with Clifford, and Briant makes Clifford's desperation both terrifying and mesmerizing. The climax of the sequence offers a slight twist in regards to Clifford's reaction that is brilliantly executed.

While Lady Chatterley's Lover might fail to consistently deliver on its ambition to be a classy picture with pubic hair, the film is peppered with well-executed moments that make it much more effective than its reputation might lead one to believe. 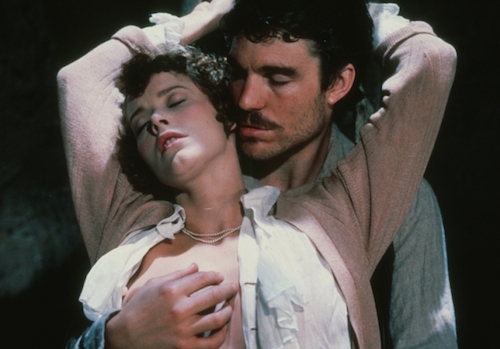 The Video:
Despite some noticeable fluctuations in image stability, Olive's AVC-encoded 1080p 1.85:1 image is perfectly satisfactory. As per usual, there has been no digital clean-up of the film elements, so there are noticeable specks, flecks, and minor scratches throughout, although nothing that would bother less-than-obsessive viewers. The blacks range from inky to milky, but it appears they were fogging up a lot of shots either in production or post-production, so the look seems intentional, especially as many of the colors (especially those reds) look particularly rich in this transfer. I spotted no significant digital compression issues.

The Audio:
No complaints about this DTS-HD MA 2.0 mono audio track. The entire film soundtrack is post-synchronized, and apart from the typical uncanniness that results from this approach, the dialogue sounds nice and typically fits in the actors' mouth just right. The score by Richard Harvey and Stanley Myers is quite lush, though it never overpowers the other elements of the soundtrack. No subtitles.

Final Thoughts:
Because it's a sometimes decent drama and it's an occasionally stirring softcore flick, Lady Chatterley's Lover is built to disappoint fans of both those genres by not just picking one ambition and sticking to it. However, if you approach this film in the spirit of curiosity -- and with not much in the way of expectations -- then I think you will find quite a few things to enjoy. On that basis, the flick comes mildly Recommended. 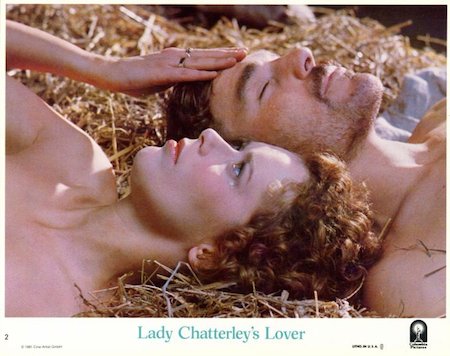