Search For Simon, The 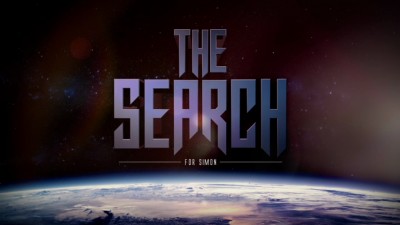 
The Movie
When you put positive quotes from two members of Monty Python on your box art, along with the blurb "One if the top ten British comedies of 2013," you are raising expectations. Expectations like, this movie won't involve the physical or psychological trauma of children. Well, consider those expectations to be dashed when you watch Search for Simon, an independent sort-of-comedy from British writer/director Martin Gooch. About 80 percent of the film is comedy, silly stuff at that, but that remaining 20 percent...hoo boy.

Videoblogger David (Gooch) is a bit of an odd duck. He doesn't have a job, his friends don't particularly want him around and his own drunk mother doesn't like him very much, going so far as to hit him with her slipper for sitting on her couch. He does have one associate who likes him, a fellow he Skypes with who goes by the name AlienfromArctunas (Mark W. Gray), who charges him hundreds of dollars for tips on alien sightings all over the world, which David dutifully follows up on to their inevitable dead ends. Why? Well, David's brother Simon has been missing since David was a young boy, and his now dead father told him that Simon went away with aliens, and David is obsessed with finding him. (Honestly, if you didn't know where this was going at this point, I would be damned surprised.) 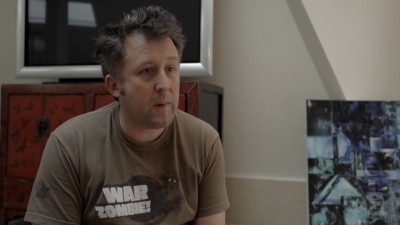 Most of the movie is focused either on David's fruitless hunt and the negative reactions of those around him, including his positively awful mother, or his interactions with a psychiatrist he meets in Denmark, herself troubled by deadlines on her book. Seeing David's issues as a sure-fire way to finish her book, the doc gets involved in his life, bringing him to her failed suicide meeting, where he meets the cute Sally (Millie Reeves), who goes along on the ride with David, finding him to be a kindred spirit of sorts. From there, it's kind of an all over the place trip, bouncing between the various threads that have been established, until David finds out what happened with Simon and everyone's storylines get wrapped up neatly.

A truly indie film in look and feel, there were some smart decisions made to assist with the production, like making video blogging and online conferencing a part of the plot, which allows for the natural integration of lower-quality footage, but the shame is, there are some truly incredible moments of outerspace visuals that just serve to point out how low-fi the rest of the movie is. Beyond the aesthetics, the quality of the story itself is just not up to snuff, with several poor performances (for instance, the role of the psychiatrist's publisher, a cartoonishly-written part to start with, just doesn't work, and just sinks like a dead weight, while a subplot involving a goofily-named confidential government organization might actually be worse.) A straight mockumentary style could have helped cover some of the sore spots, but the climax of the main storyline remains so out of tune with the rest of the film that it was bound to be an issue no matter what. If you're going to have a goofy movie (which much of the film is) go for it. Embrace it. But to try to feel genuine about mostly silly characters just doesn't work. The results just aren't fun.

(NOTE: There seems to be a serious encoding issue at around the 82-minute mark on the DVD, which ends up repeating approximately four minutes of the film. When watching the film the first time, because of where the jump back occurred, it felt like an artsy way to represent the mental state of one of the characters, but listening with the commentary, it's clear it was an error, as the commentary repeats as well. Unfortunately, this affects how the film is perceived on first watch, and is hard to ignore.) 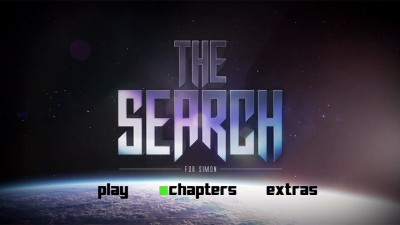 The DVD
Packaged in a standard keepcase The Search for Simon arrives on a single DVD, which offers a static, anamorphic widescreen menu with options to play the film, select scenes and check out the extras. There are no audio options and no subtitles or closed captioning.

The Quality
Delivered in an anamorphic widescreen transfer, the movie is a bit of a hodgepodge visually, from Flip-cam quality video to beautifully vivid deep-space footage, and everything in between. For the most part however, the look is decently sharp low-budget video, with slightly dull, but appropriate color, a reasonably high level of fine detail and sufficiently dark black levels. There are no notable issues with compression issues though and the image has no obvious defects.

The Dolby Digital 2.0 audio track is a rough one, representing the film's recording capabilities. Audio, which is a straightforward, balanced mix, is often overmodulated and tinny, with dialogue often sounding like it was recorded in a large empty room. Music can be too loud at times. It's tempting to call the effect charming on the whole, but it makes it tough to listen to.

The Extras
The main extra is an audio commentary with Gooch and his parents, Peter and Joy. Gooch narrates the film far too much, but he does offer plenty of production details and points out the wide variety of sci-fi references in the movie. Mum and dad play the part of the supporting parents any filmmaker would want on this track, though dad is a quite enjoyable in questioning Martin about plot holes in the movie and making fun of his boy. We could use his amusing analytical perspective on more commentaries.

There are 14 deleted scenes to check out, running a whopping 40:42 in all. Add that to the movie's actual run-time, and it's just more proof that there was too much stuffed into this movie. It's an unusual mix of footage, from snowy winter B-roll to David joking with a little kid to clips of online alien theorists. The most interesting bit (and darkest) is an extended clip from the failed suicide meeting, where each attendee explains how they tried to kill themselves, which probably doesn't happen in support groups (even according to Gooch's father), but hey, it's here anyway.

Four featurettes can be watched in a 14:42 reel, with "Do You Speak Martian?", "The Professor Speaks", "Alien Ear Bogies" and "Interviews." Like the deleted scenes, it's a strange blend, including a Dr. Who-like clip, chats with kids about what aliens sound like and interviews about aliens with random people, including one that I'm fairly certain is actor Warwick Davis.

Adding to the potpourri are 20 behind-the-scenes vlogs (totaling 25:54), which focus on the production, including scouting and footage that was cut from the movie. It was expected there would be on-set material, but with such a low-budget, there probably wasn't time or manpower (especially most of this content is Gooch talking into a camera he's pointing at himself.

A music video for the song "Search for Simon" by The Priscillas is a tie-in to the film, with alien-abduction themes, and the song is a straight-forward girl-rocker tune. Not very memorable, but not bad either.

Also available on the DVD is the film's trailer (2:08). The box indicates that there's a secret hidden vlog, but I couldn't find it looking through the disc, with every chapter stop accounted for. 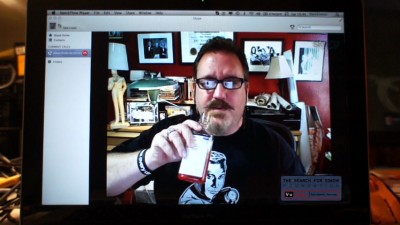 The Bottom Line
Gooch seems like a good guy, from the great tradition of put-upon British everymen, but this movie tried to be too many things all at once and the results are too much of a mish-mash to work. The disc looks and sounds as good as it's ever likely to, and there's a healthy amount of bonus content for anyone interested in DIY cinema, but unfortunately, no matter how much the indie supporter in me wants to say otherwise, it's hard to recommend this movie. Only the inexpensive price raises it from a skip.