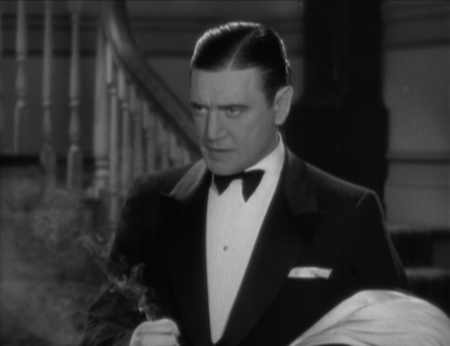 An innocent man is framed for the misdeeds of his colleagues and only a playboy vigilante has the gumption to save him in 1931's The Public Defender, based on the novel The Splendid Crime by British author George Goodchild. To modern eyes, Goodchild's premise seems like a dry run for the Batman franchise, with hero Pike Winslow a proto-Bruce Wayne, intentionally playing up his vapid socialite image in public, while using his cunning to enact justice in the shadow of night. With Cimarron's Richard Dix appearing as Winslow, one could easily have seen this turning into a fun franchise as well. Dix is a perfect fit for the role too: he's square enough to play both the doltish rich kid and the heroic crimefighter with equal believability. (It doesn't hurt either that, in profile, Dix looks like a Dick Tracy comic strip come to life.)

Vigilante heroes apparently hadn't thought up the idea of face masks or costumes in 1931, so Winslow must depend on his natural speed and stealth not to get caught. Winslow does have a catchy name, however: "The Reckoner," which he has scrawled on little calling cards (next to a drawing of the Scales of Justice, naturally) that he drops at the scenes of his crimes. The Reckoner also has two handy assistants: a sweet but simple brawler named Doc (Paul Hurst) and The Reckoner's own answer to Alfred the butler, the erudite Professor (Boris Karloff, whose iconic turn in Frankenstein would be released three short months after this film). Together, this dynamic trio (mmm... doesn't quite have the same ring) work their way through a series of crooked bankers, robbing them of their stashed papers, looking to compile evidence to clear the name of Eugene Gerry (Emmett King), who was set up as the fall guy for a massive embezzlement that leaves him facing a potential stretch of twenty years in prison.

Unlike Bruce Wayne, Winslow does not have a tortured past that inspires him to right wrongs. Instead, he is motivated by love: he wants to marry Eugene Gerry's daughter, Barbara (Shirley Grey). As is so often the case, their courtship is not completely smooth. Even though Winslow is considerate enough to rescue the Gerry family's heirlooms from auction, Barbara feels like Winslow treats her too much like a child. One amusing scene has Winslow turning to the Professor and Doc for love advice; it concludes with Winslow and the Professor trading lines of poetry while Doc chows on a big hunk of cheese.

First-time director J. Walter Ruben pulls off a handful of thrilling setpieces where The Reckoner and his partners sneak into heavily guarded mansions to get the documents they need. He also manages to keep the talky scenes moving at a good clip, despite some stilted performances throughout the ensemble. Dix -- who frequently gets knocked for his dated performance style in Cimarron -- acquits himself quite well here. He seems fairly laid back and even manages to score some unexpected laughs from a few intentionally awkward exchanges.

The Public Defender is a pulpy charmer that's worth checking out for fans of classic detective stories and early superhero comics. 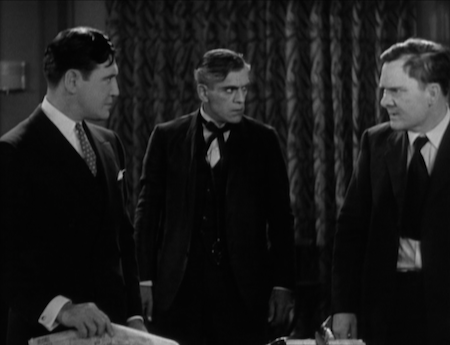 The DVD
The Public Defender is available through the Warner Archive Collection of manufactured-on-demand DVD-Rs.

The Video:
The bad news is that the film materials used for the standard 1.33:1 transfer are heavy with dirt and white specks, with some scratches and even some splices to boot. The good news is that overall the picture is stable, with nuanced contrast and inky blacks. Detail level fluctuates, but is fairly good overall. I also spotted no digital artifacts or other major compression issues.

The Audio:
Like the video, the Dolby 2.0 mono audio definitely shows its age. The sound is boxy overall, with noticeable hiss and some occasional pops. That said, I never had difficulty understanding any of the dialogue.

Final Thoughts:
He doesn't have the gadgets of Batman, the supernatural powers of the Shadow, the law enforcement training of The Spirit, or the elaborate mythos of The Phantom, and yet The Reckoner's minor adventure presented here will probably hit the spot for fans of those classic characters. Recommended. 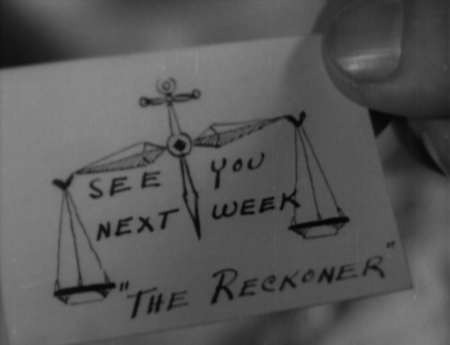