Most sports documentaries are produced with the fans of the sport in mind. However, there are those exceptions that manage to tell universally relatable stories that transcend the confines of the sport. Examples like Senna, Tyson, and of course Hoop Dreams come to mind. The technical details of the sports depicted take a back seat in these films in order to establish personal and powerful stories of inspiration, drive, tragedy, and redemption. A rags-to-riches-and-back-to-rags story that happens to be centered on skateboarding, All This Mayhem is bound to attract hardcore fans of skateboarding, but should be seen by anyone looking for an equally inspiring and heartbreaking story. 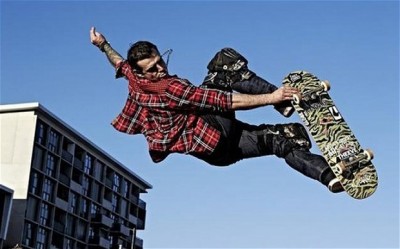 If you don't know much about the Australian skateboarding brothers Tas and Ben Pappas, I advise you to dive into All This Mayhem with as little information about their story as possible. I'll relay to you the basic information found in every brief synopsis of the film:

The Pappas brothers were immensely talented skateboarders who idolized their American counterparts like Tony Hawk as they practiced their tricks in a small park in Melbourne. They were bogans, Australian white trash, and could never even imagine making it to America as professional skateboarders. But that's exactly what happened, as they eventually found themselves competing against the best in the sport. Unfortunately, a perfect storm of arrogance, lack of showmanship, a rather admirable resistance to selling out, plain bad luck, and lots and lots of drugs, plagued the brothers and they began their downward spiral back into obscurity.

Eddie Martin's profoundly moving documentary was produced in association with Vice, and contains their trademark approach to raw storytelling devoid of obvious stylized approaches and their dedication to brutal honesty. Tas and Ben's tale is edited using simple yet effective intercutting between period footage that spans three decades, and present day interviews with Tas and his skateboarder friends from different periods of the brothers' lives. It thankfully lacks the overly stylized approaches of a lot of other skateboarding documentaries. There aren't any sick montages of tricks played over heavy metal, no attempt at embellishing the drama of any given situation with an emotionally manipulative score or narrative trickery. All we get is the simple facts of the story, which is part inspiring underdog sports movie, and part Shakespearean tragedy.

During the interviews, Tas and Ben's friends don't hold back and describe the many ways the brothers obviously screwed up their many chances of becoming as big as Tony Hawk. Yet there's a tremendous amount of respect and love between the lines. The many joys and pains within the different sections of the brothers' lives are captured delicately through the vast amount of amateur footage from the last three decades. 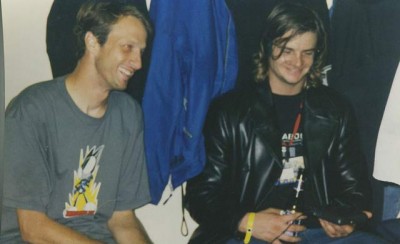 Most of All This Mayhem consists of archival footage, from amateur video recorded by the brothers' friends, to various TV broadcasts of the skateboarding competitions. The footage is mostly from the late 80s and early 90s and therefore aren't from HD sources. The amateur footage is either from Video-8 or VHS cameras, so they are predictably full of color bleeding and various video noise issues. The HD interviews are clean without much technical grandstanding. It's the story that matters here, not the crispness of the visuals.

All This Mayhem comes with a DTS-HD 5.1 track that mostly sticks to the front channels. The audio from the archival footage sounds as clean as it could, which is vital to the overall story, and the interviews are mixed perfectly. Some skateboarding fans might expect a more bombastic and immersive audio experience, but the subtle approach of All This Mayhem is where its narrative power lies.

Deleted Scenes: 35 minutes of deleted scenes are offered here, most of which add layers to the story found in the finished film. These scenes come highly recommended to fans of the All This Mayhem.

The Making of a Trick: This is a four-minute featurette where Tas talks about the skateboarding tricks from his past. It works more as an extended trailer.

Shredding Against The World: This is an 8-minute featurette where the brothers' friends talk about Tas and Ben's influence on their lives.

I wouldn't be surprised if there are already plans in Hollywood to turn this material into a narrative feature. I imagine hacky pitches like "It's Raging Bull with skateboarders" being thrown around. This story is full of enough dramatic heft to attract attention from the power players. Even if a fictionalized version comes out in the future, my advice would be to stick with this expertly and tenderly constructed documentary. Everything you need to know about this story, from the micro to the macro, is already here.