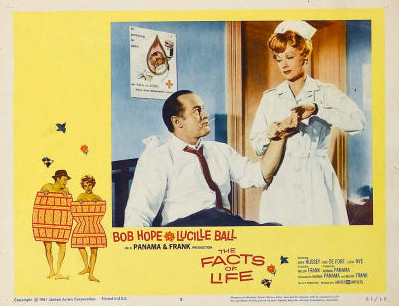 You take the good, you take the bad, you take two unhappily married people stranded in Acapulco and whatta you have? 1960's The Facts of Life was the result, the third onscreen teaming for comedy legends Bob Hope and Lucille Ball. Stuffed with as many introspective, dramatic moments as laughs, this enjoyable outing gets its Blu Ray debut in a nice edition from Olive Films.

For a breezy early-'60s comedy, The Facts of Life is unusually frank. The smart screenplay by director Melvin Frank and frequent collaborator Norman Panama (The Court Jester; White Christmas) delves into whether men and women can be friends without a possible sexual attraction getting in the way. Between predictable gags which play into Hope and Ball's well-established public images (he's the complacent boor, she's the scatterbrain), the movie is surprisingly insightful on the intangible things that keep long-married couples together.

In The Facts of Life, Hope and Ball play Larry Gilbert and Kitty Weaver, a couple of jaded California suburbanites who are stuck in a rut. Larry, a smarmy community leader, is barely tolerated by Kitty since he's the best friend of Jack (Don DeFore), Kitty's compulsive gambler husband. Meanwhile, Larry finds Kitty nearly as boring as his own busybody wife, Mary (Ruth Hussey). The two couples are so consumed with the everyday grind of raising their families that it comes as a relief when their friend Dr. Mason (Phillip Ober) and his bubbly wife Connie (Marianne Stewart) plan an adults-only getaway to Mexico for six. While circumstances force Mary and Jack to delay their departure for Acapulco, the Masons get felled by stomach flu upon arrival, prompting Larry and Kitty to find ways to do stuff together despite their misgivings toward each other. In their alone-time, Larry and Kitty are pleasantly surprised to find that they share a lot in common, their playful flirting intensified by drinking, dancing and the romance of Mexico. By trip's end, the couple are firmly in love - and struggling to find a way to tell their spouses back home their plans to divorce and start anew with each other.

Subsequent scenes in The Facts of Life have Hope and Ball hilariously attempting to get together for an affair, despite their meddling spouses and busy lifestyles - a concept which was fairly risqué for 1960. Perhaps due to the sheer novelty of the story, it ends up being one of Bob and Lucy's better movies, separately or together. Although Hope's character spouts the usual groaner one-liners associated with the comic, he isn't nearly as insufferably smug as in his other forgettable '60s vehicles. It also helps that he has marvelous chemistry with Lucy, adding a realistic melancholy to their characters' plight. Ball may give Kitty a few too many Lucy Ricardo-esque mannerisms, but she does an excellent job conveying the character's misgivings about throwing herself into an affair with Larry. As the neglected spouses, Hussey and DeFore also contribute fine performances. While the lead actors seemed much too old to be playing suburban parents with school-aged children, the low-key laughs and heartbreaking pathos in this otherwise lightweight story make up for it.

A number of other, smaller factors make The Facts of Life worth catching at least once. It was the last film for African-American actress Louise Beavers, who appears briefly as the maid (again) in the Hope/Hussey household. Beavers' name is misspelled in the delightful opening credits sequence from designer Saul Bass, who collaborated with Alfred Hitchcock, Martin Scorsese and many others. It's also worth noting that Lucy wears a succession of lovely yet character-appropriate outfits designed by the legendary Edith Head.

The Facts of Life comes to high-def looking sensational on Olive Films' disc. They secured a near-pristine print for the 16:9 widescreen presentation, with the subtly varied black and white photography revealing fine grain and nice detail. There are a few instances where image quality degrades when scenes transition into each other, otherwise it looks spiffy with just a moderate amount of age and dust.

The mono soundtrack is a low-key, pleasantly modulated track which doesn't have too many instances of distortion or hiss. No subtitles or alternate audio are included.

Well, it's Olive, so all you get is a Theatrical Trailer.

Jarring as it can be seeing beloved comedy legends Bob Hope and Lucille Ball as a pair of sneaky would-be adulterers, The Facts of Life served as a good, unexpectedly solid vehicle for their talents. This cute, observant laugh-fest is given satisfactory treatment on Olive Films' Blu Ray. Recommended.