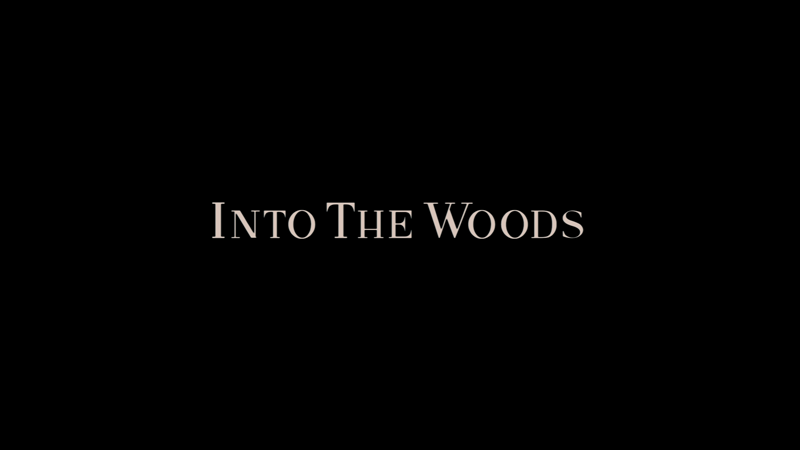 
The Movie
Once upon a time, the idea of combining fairy-tale characters from different stories into one universe was unique and fresh. But after Bill Willingham's comic-book series Fables, the Shrek franchise and the TV show Once Upon a Time, we may have reached a point where it's risking being overdone. Into the Woods was an early arrival at the party though, as Stephen Sondheim and James Lapine's 1986 stage musical was one of, if not the first to create a Marvel-esque cinematic universe out of childhood favorites. Thus the movie adaptation of Into the Woods being only the latest example hitting the screen is somewhat excusable as a follow-up to a pioneer.

The core of the story is the Baker (new The Late Late Show host James Corden) and his wife (Emily Blunt), a childless couple tasked with a quest by the witch next door (Meryl Streep.) If they ever hope to add a baby to their family, as she cursed their house for a long-ago wronging on the part of the Baker's father, they have three days to acquire four items for her: "the cow as white as milk, the cape as red as blood, the hair as yellow as corn, and the slipper as pure as gold." Anyone with a decent knowledge of fairy tales should have an idea of who these items relate to, especially after the film's opening prologue introduces you to three of them--Anna Kendrick as Cinderella, Daniel Huddlestone's Jack and Little Red Riding Hood, played by Lilla Crawford (the fourth isn't hard to guess.) The Baker and his wife act like the connective tissue of the film, bringing together all the well-known characters during the course of the plot. 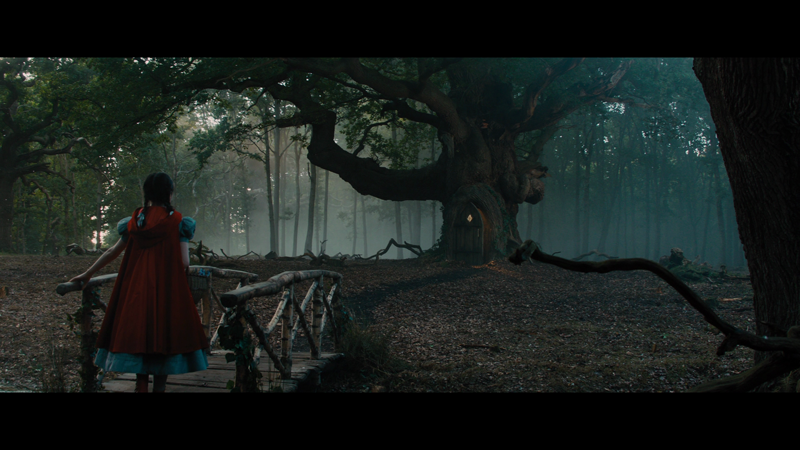 The film is somewhat episodic, moving from meetup to meet-up, with songs acting as punctuation, and the witch's quest lending the action a natural structure. This is especially true in the film's first act, where the movie moves smoothly and comfortably, and the first 75 minutes or so fly by quickly, with a mix of fun and emotion, as the players are introduced, we learn their motivations and watch the characters make their way through the woods and their own specific stories, like Cinderella's visit to the Prince's ball and Little Red Riding Hood's trip to Grandma's house. There are a number of stand-out musical numbers in this portion, including the epic prologue "Into the Woods," "Agony," a fun, silly song about princely problems sung by the two princes (Chris Pine and Billy Magnussen, both quite funny) and "On the Steps of the Palace," an introspective tune from Cinderella, that lets Kendrick unleash her pipes. Even Johnny Depp, who has a small, but memorable part as the Wolf, acquits himself well in putting a creepy spin on "Hello Little Girl." No one is bad in anyway, with Corden making a big impression in his first big-time starring film role, Christine Baranski being a great choice as Cinderella's evil stepmother and the two kids, Huddlestone and Crawford, delivering pitch-perfect, classic Broadway-style performances.

The problem is the film doesn't end at the 75-minute mark, despite reaching a somewhat natural conclusion. There's a lot of story left from the show, exploring the consequences of the characters' actions in the first act, with Jack's well-known foes playing a big role. The film takes a hard left turn into much darker territory. The remaining 45 minutes are incredibly slow moving, and lack the highlight musical numbers of the first act, with the exception of the beautifully layered "Your Fault," which sees the characters turn on each other in groups, and some of the ending numbers. Because of how the plot progresses, which sees characters do unfavorable things and features some truly bummer revelations, the second act is far less enjoyable, and the fact that it moves like it's unreeling through molasses makes for a disappointing conclusion after the great first act. It's hard to blame that on director Rob Marshall (Chicago) who did a fine job in adapting the show, making some tough decisions and avoiding being slavishly faithful to the Broadway show. The problems that remain in his film version may be the reason why it took so long to bring Into the Woods to film. 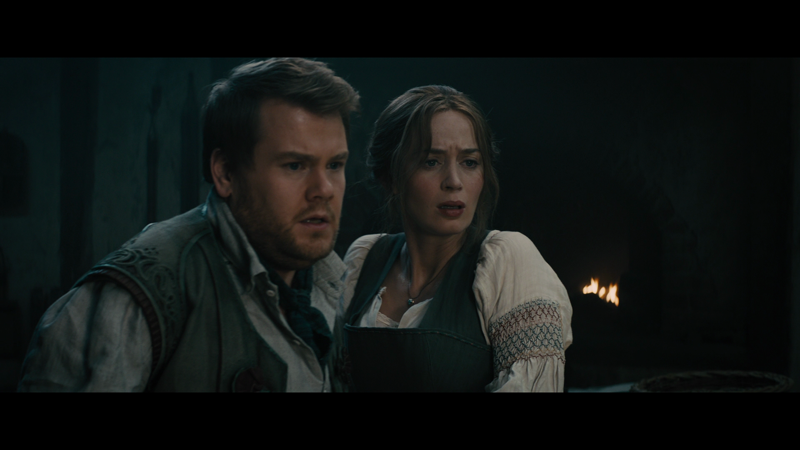 The Disc
Into the Woods arrives on one Blu-ray, packed into a clear Blu-ray keepcase, is held in a holo-foil, embossed slipcover. A gorgeous animated menu that uses the art from the film's theatrical posters offers a choice to watch the film, select scenes, adjust the set-up and check out the special features. Audio options include English 7.1 DTS-HD Master Audio, English Descriptive Audio 2.0, and French, Spanish and Thai 5.1 Dolby Digital tracks, while subtitles are available in English, English SDH, French, Spanish, Thai, Bahasa, Korean, Malay, Portuguese, Simplified Chinese and Mandarin Chinese.

The Quality
The 1080p, AVC-encoded transfer here is tremendous, delivering an image that boasts an incredibly high level of fine detail, deep black levels and beautifully saturated color. The film looks simply wonderful, no matter the setting or the lighting, to the point where the CG work is at times more obvious than anyone would prefer, likely due to the clarity and quality. Digital distractions are in no way an issue either, with no problems introduced in the production of the disc.

The 7.1 DTS-HD Master Audio track is equally impressive, with the moments involving Jack's nemesis offering some of the best home-movie bass effects ever, with room-rocking low-end that truly drives home what's happening on-screen. The mix takes full advantage of the soundfield, moving effects and ambient sound around the surround speakers with pans and positioning in concert with the visuals to put the viewer right in the middle of the action. The voices are all excellently reproduced, along the powerful music, making for a first-class experience.

The Extras
The extras are rather plentiful on this disc, starting with a feature-length audio commentary from Marshall and producer John DeLuca. With the director taking the lead, the track is surprisingly full, avoiding any dead air during the film's two-hour runtime. The pair cover a little bit of everything, including discussion of the cast, crew and locations, the film's plots and themes, production stories and changes that were made from the stage show, as well as connections Marshall makes between the film and 9/11, which are surprisingly not as much of a stretch as you might think on first blush.

A great extra that should be included with every musical is the Music and Lyrics section, which lets you cue up any of the 17 songs in the film, with on-screen lyrics, or watch the film in its entirety with on-screen lyrics for the songs. For anyone who likes to sing along or who wants to revisit some classic musical numbers, this is a great inclusion and will certainly not result in dozens of consecutive viewings of Kendrick singing "On the Steps of the Palace."

For musical fans, particularly those who enjoy Sondheim, the inclusion of an all-new song written by the musical master is an exciting addition. "She'll Be Back" (4:48) sung by Streep as the witch, was intended to show the witch's emotions after she experiences a loss, but was cut when it negatively affected the film's already problematic pace. The song, which is fine, but no better than songs that made it into the film, is offered with a non-optional introduction from Marshall.

The remainder of the extras are featurettes, starting with "There's Something About the Woods" (13:23). This overview of the film, focusing on the titular woods and their importance to the story and film, includes interviews with all the major players and several members of the crew and covers everything in broad strokes.

The rest of the featurettes go into more detail, with "The Cast as Good as Gold" (10:10) naturally looking at the actors, using on-set footage and more interviews to talk about auditioning, rehearsing and Tracey Ullman's love of the cast's resident cow. The four-part "Deeper Into the Woods" (a combined 29:57) breaks down your usual behind-the-scenes material, with "From the Stage to the Screen" (the adaptation), "The Magic in the Woods" (a look at the creative process), "Designing the Woods" (the production design) and "The Costumes of the Woods" (the costumes, natch.) The majority of these pieces are made up of interviews, with some on-set clips and production documents. There are a few interesting notes to be found in these featurettes, including how new lyrics were written for some of the nearly 30-year-old songs and the inspiration for the various wardrobe designs. 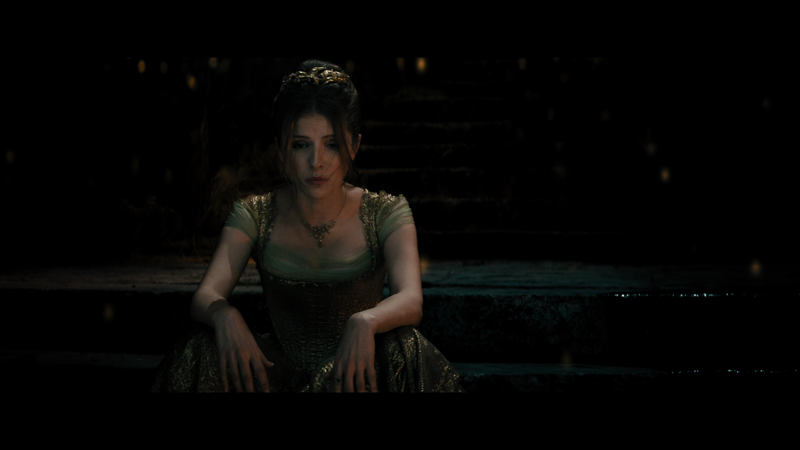 The Bottom Line
Into the Woods changes gears roughly in the second act, whether you are watching it on-stage or as a movie, so that's not a negative against the film, even if the effect feels more acute here. The movie just feels so lively and enjoyable in its first act, with uniformly great performances and a fine directing job by Marshall, that the downer second portion feels like a drag in comparison--a natural consequence considering the message it sends. The result is a fine production you may want to watch with an intermission. The Blu-ray looks and sounds fantastic and offers a nice spread of extras for fans of either version of the musical. Sondheim followers can buy with abandon, but a rental at first is probably recommended for anyone but the musical-inclined.