The images accompanying this review are taken from promotional materials and do not reflect the quality of the Blu-ray under review. 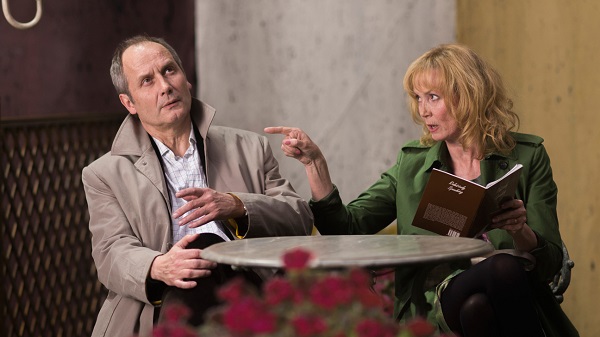 Accompanying the new Blu-ray edition of Alain Resnais's final film, Life of Riley, is a nice booklet featuring two essays. The first is from the late French filmmaker himself, detailing what has intrigued him about the work of playwright of Alan Ayckbourn over the years (Life of Riley is Resnais's third Ayckbourn adaptation). The second is from film critic Glenn Kenny, exploring the idea of the unintended final film: even though Resnais was 91 years old when he made the film (and when he died last year), it wasn't intended as some sort of farewell statement and so it ends Resnais's filmography on a kind of ellipsis.

Elsewhere, it's already been written that 2012's You Ain't Seen Nothin' Yet is the more appropriate career capper, because it is more ambitious and feels like a greater achievement. These reactions are all about context, of course. Focusing on its own merits, Life of Riley plays as a slight but entertaining doodle that builds on the style of the film that preceded it but seems content merely to experiment rather than to perfect.

The story concerns three post-middle-age couples who are shaken to the core by the news that their friend George Riley only has six months left to live. Colin (Hippolyte Girardot) is George's typically fastidious but accidentally loose-lipped physician, who spills the beans to his wife Kathryn (Sabine Azéma). She then immediately blabs to George's life-long chum Jack (Michel Vuillermoz), who happens to be stepping out on his wife, Tamara (Caroline Sihol). Meanwhile, George's wife Monica (Sandrine Kiberlain) must also reconcile with the news, having walked out on George years ago for farmer Simeon (André Dussollier).

Colin, Kathryn, and Tamara are all involved in an amateur production of Ayckbourn's early play Relatively Speaking (because self-reflexivity is good for the soul, I guess). They decide to recruit George for the play, to give him something fun to do with his remaining time. Over the six months of rehearsals, the three women are all pulled toward George, either in hopes of reigniting life's passion (Kathryn), enacting revenge (Tamara), or confronting long-ignored emotions (Monica). Meanwhile, their husbands get increasingly more aggravated and must decide whether to just wait it out (I mean, George is going to die soon) or to actually do something to rectify things.

Despite some textual interplay by Ayckbourn with his earlier play, and the slightly gimmicky choice to leave George Riley off-stage for the duration, the Life of Riley script is really quite straightforward. Resnais's visual approach ends up being the most noteworthy aspect of the film. As with You Ain't Seen Nothin' Yet, Resnais stages the action on blatantly artificial sets that make it initially appear like the actors are being super-imposed over comic strip drawings; later, in the rare instances where Resnais chooses to shoot a close-up, he actually does super-impose the actors' faces over a drawn background. Adding to this comics-theater-cinema hybrid, Resnais uses driving shots of Yorkshire (yes, despite the French dialogue we're supposed to still be in England) juxtaposed with illustrated "establishing shots" by French comics artist Blutch as his scene transitions. This strange confluence of disciplines is fascinating, but it never fully coalesces into something transportive or magical. It just remains interesting.

After the initial novelty of Resnais's style wears off, though, the actors' performances help to keep the film vibrant. The characters all start off the film a bit thin and broad, but as the story continues, they deepen, and the actors deepen with them. Girardot and Azéma's later scenes, in which his character is pushed to the brink and must finally put his foot down about her character's plans to go away with George for a two-week getaway, are particularly warm and poignant.

Unless they retire early, filmmakers rarely get to pick what their last film is going to be. Life of Riley seems like the development of a thought that might have reached fruition (or might have just seen further development) in the next Ayckbourn adaptation Resnais was planning to film when he died. Any dissatisfaction in viewing this film comes merely from the fact that there won't be any more to join it.

So it's not a perfect eulogy for the man who made it. So what? It's a fine movie. 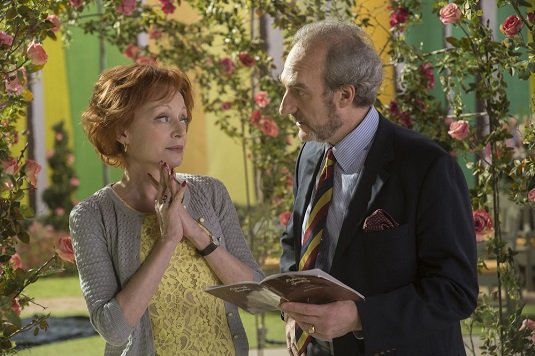 The Video:
In my review of You Ain't Seen Nothin' Yet, I grumbled that Kino Lorber should have bothered to put out a Blu-ray of the film, because it looked splendid. Well, I guess they realized the error of their ways, and have given Life of Riley the proper HD treatment. The AVC-encoded 1080p 2.35:1 image is outstanding. The cartoonish colors of Jacques Saulnier's sets pop out like a children's picture book. Black levels are deep and rich. Details are crisp and compression issues are nearly non-existent.

The Audio:
Two French-language options are available (with optional English subtitles): DTS-HD MA 2.0 stereo and DTS-HD MA 5.1 surround. Being based on a stage-play, the film is pretty dialogue-centric. The surround mix adds a little ambience but mostly it provides a great showcase for Mark Snow's synth score. If you've got a surround set-up, it's definitely preferable.

(HD, 16:42) - The title of this featurette is a riff on the French title of the film, Aimer, Boire et Chanter, which is the French variation on the phrase "Eat, drink, and be merry." The piece consists of the actors talking about Resnais: his ideas, his methods, his artistic interests. It's not devoid of worthwhile info, but it's put together in a way that is unfortunately a little boring.

Final Thoughts:
From the evidence here, Life of Riley is an okay play turned into a good film by a master director. It's an odd but fitting note for the 91-year-old Alain Resnais to leave this world on, and certainly a piece of work worth checking out. Recommended. 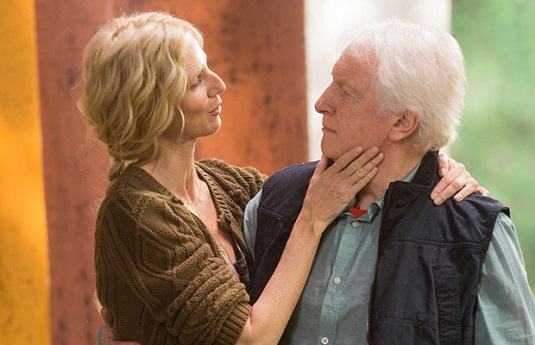