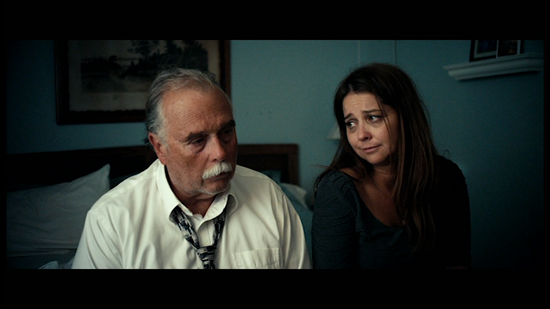 When it comes to our inevitable end, most people take on the attitude expressed in Woody Allen's famous quote - "I'm not afraid of death; I just don't want to be there when it happens." Not so for Forty Years from Yesterday, a poignant yet bone-dry drama from directors Robert Machoian and Rodrigo Ojeda-Beck that unflinchingly looks at the process of death and grieving. Although the one deceased character in this understated 2013 indie meets her maker off-camera, most everything else about this story is explicitly shown onscreen. Its documentary-style tactics allow the viewer to peer into the most intimate moments of someone else's life - in long, contemplative (and boring) takes.

Forty Years from Yesterday has the most noble of intentions, chronicling the effects of a woman's sudden death on her husband of forty years and their three grown daughters. The film was made to de-stigmatize death, coldly depicting the normal - even quite banal - process of dealing with a deceased loved one and the menial rituals that go with it. Actor Bruce Graham does an exceptional job portraying a widower's assortment of emotions as the lead character (also named Bruce), a retiree in a contemporary American industrial town vaguely suggestive of Central California. When returning from a typical morning jog, Bruce finds that his healthy-seeming wife has died, her prone corpse fallen off the bed she had been sleeping in just an hour earlier. The events that proceed are depicted in a deliberately drama-free method, with minimal dialogue, few edits, and straightforward camera setups. Bruce's narrative of grieving, making arrangements, and alerting daughters Rebekah, Chelsea and Elizabeth alternates with a few vignettes showing a funeral director, his assistant, and the trainee they recently hired. An extraordinary, painful event for Bruce and his family is simultaneously seen as everyday procedure for the funeral home employees.

Lengthy, static takes and non-theatrical dialogue put Forty Years from Yesterday in the realm of minimalist filmmaking, a technique which is actually pretty tough to pull off with any sense of nuance. While I was hoping to say this film was a good example of minimalism, the directors' insistence on telling this intimate story at arm's-length distance makes it dry and unstimulating. The cast does a capable enough job - especially Bruce Graham and Suzette Graham as Suzette, the corpse. There are also a few fascinating moments in the mortuary sequences and the documentary-like depiction of an average day in a business that deals with customers when they're at their most vulnerable. However, it's hard to care about both the family's grieving and the mortuary's process when it's all portrayed with the panache of an instructional video.

Forty Years appears to owe a debt to Chantal Akerman's minimalist masterpiece from 1975, Jeanne Dielman, 23 Quai du Commerce, 1080 Bruxelles. That film's portrayal of the rote repetition of an average housewife's daily grind had a devastating message about oppression behind it - and a payoff - which this endless slog of a film lacks. 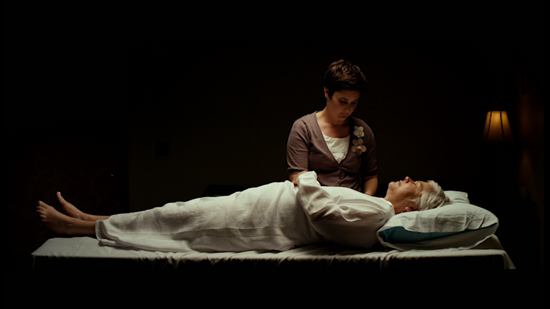 BrinkVision's DVD edition of Forty Years from Yesterday sports a better-than-average picture letterboxed in 2.35:1 aspect ratio. The digital photography tends to look murky at the dark end, but otherwise it's a clean mastering job with pleasant detail. The color seemed kind of wan and not saturated enough, although that was likely an intentional choice on the directors' part.

The disc's 5.1 Surround soundtrack is a clean, semi-pristine mix with a decent, non-distorted dialogue and judicial use of music appropriate for its quiet, meditative tone. No subtitles or alternate audio are provided.

Although it's not listed on the packaging, this DVD includes two short films directed by the same team who did Forty Years from Yesterday. Waiting Room (2011; 10 minutes) is a condensed rough-draft version of the feature with the same lead actor and home used in the final film. The Diggers (2013; 13 minutes) was intended to be edited into Forty Years but ended up as its own standalone short. In the film, idle chatter by two hispanic graveyard employees alternates with long, boring shots of earth being excavated and a coffin lowered into the newly dug grave.

Death and the grieving process has never been depicted with such banality as in the 2013 indie drama Forty Years from Yesterday, a film done in the "keep the camera still for an agonizingly long time" directing method. Well-intentioned as it is, given the intense subject matter, this was a strangely unmoving experience. Skip It. 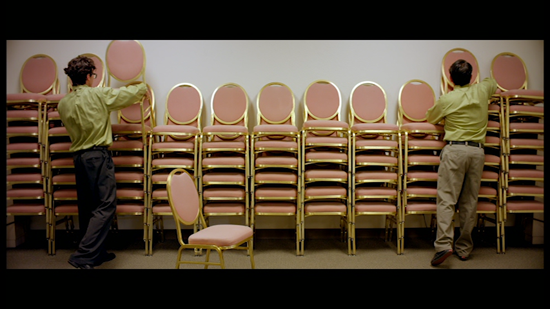