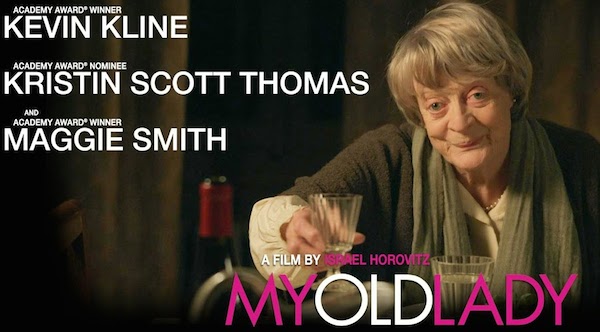 There's a bit of bait-and-switch going on with My Old Lady, the film directing debut of New York playwright Israel Horovitz (adapting one of his own plays). The playful title, the slightly cutesy accordion music by Mark Orton, the romantic shots of Paris, and the shticky introductions to the characters all lead unprepared viewers to assume that they are being offered a lightweight romantic dramedy aimed at the 55-and-older crowd. For certain passages, the film makes good on that implied offer by providing a few chuckles and a romantic subplot, but for the most part, Horovitz is most interested in exposing the tremendously damaged cores of his main characters in many shattering dramatic scenes. The film arguably becomes much more interesting for plumbing such dark emotional depths, but it's pretty unexpected considering the set-up.

Mathias Gold (Kevin Kline) comes to Paris to claim the inheritance left for him by his father, a giant apartment right in the heart of the city. Except there's a catch: the apartment is inhabited by a 90-year-old woman, Mathilde (Maggie Smith, not attempting to sound or act French), and her middle-aged daughter, Chloe (Kristin Scott Thomas, also not attempting to sound or act French), who have no intention of leaving. And there's no reason that they should. Mathias's father did not own the apartment outright. It was sold to Mathias's father in a deal known as a "viager," in which the seller continues to live on the property and is paid monthly by the buyer until the seller finally dies. The buyer essentially bankrolls the seller for an indeterminate amount of years, just to have dibs on the property when the seller finally kicks the bucket. (In this aspect, the film seems to be inspired by the real-life case of Jeanne Calment, the oldest person who ever lived. At age 90, someone bought her apartment as a "viager," and ended up paying Calment for 30 years -- until he died. His wife then continued the payments for the final few years: Calment lived to 122 years, 164 days.)

Needless to say, our American friend is horrified. After three divorces and numerous other bad decisions, Mathias is deep in debt and was depending on selling this apartment to help him get out of the red. When he explains his predicament to Mathilde, the old woman bluntly replies, "How do you get to be 57 and have so little to show for it?" Chloe isn't much more sympathetic, threatening to have the sale contract nullified the moment that Mathias fails to make his first monthly payment. Undeterred, Mathias consults with a friendly real estate agent (frequent Jean-Pierre Jeunet collaborator Dominique Pinon), who says the apartment could fetch around 12 million Euros, even with the "viager" situation. Sure enough, soon he has a wealthy developer (Stéphane Freiss) on the hook to buy the place.

Before Mathias can seal the deal, a chain-reaction of revelations commences, starting with the reason that Mathias's father bought the apartment in the first place. I'm not going to go into the details here, but if you already have a suspicion about what's going on, you are probably right. None of the turns of the plot are particularly earth-shattering. The real surprise turns out to be how serious and intense the dialogue in the second half of the film becomes, probing the ways that parents and children affect each other for better or worse. In the interview included as a bonus feature on the Blu-ray, writer-director Horovitz makes a point that the film script mutated away from the original stage version, but even so, it feels like every character is allotted their big, showy, emotional catharsis, as though they were taking turns walking downstage into a spotlight and monologuing.

Considering this cast, that's not entirely a bad thing. After all, no one pulls off sarcastic men hiding their inner turmoil quite like Kevin Kline. (This is especially true in the late scenes of the film, when Mathias explicitly clings to facetiousness [and booze] as a coping mechanism after learning things he'd rather not know.) Similarly, Maggie Smith is utterly in her element as a tough-minded and occasionally tender matriarch. Kristin Scott Thomas unfortunately has the least juicy role of the three -- despite a subplot about an affair with a married man -- but she more than ably makes every moment she is onscreen count.

My Old Lady is not a total success, despite committed and magnetic performances all around. The incongruity of the comedy and the drama, coupled with a too-tidy wrap-up in the end, can't help but leave viewers feeling a bit let down. If you're in the mood for an actors' showcase, though, this certainly could do the trick.

The Blu-ray
The BD is packaged with a download code for Ultraviolet or iTunes.

The Video:
As usual, Universal has served up a stellar AVC-encoded 1080p 2.40:1 image that has phenomenal detail, inky blacks, and satisfying color reproduction, with no noticeable digital compression issues. Cinematographer Michel Amathieu exploits a sedate, earthy color palette, yet the video image never looks weak or washed-out. This is a grade-A transfer.

The Audio:
The DTS-HD MA 5.1 surround audio is also excellent technically. The mix itself is a little thin on atmosphere in the surround channels, but the dialogue sounds clear and robust while the Mark Orton score weaves in and out subtly. Oddly, there are no subtitle options.

Special Features:
Just one bonus: a fairly sizable Interview with Kevin Kline and Israel Horovitz (HD, 57:32), conducted by film scholar Annette Insdorf after the first New York screening of the film at the 92nd Street Y. Oddly, this clip begins with an unnecessary 5-minute preface to the film by Insdorf, which informed the audience about upcoming live events at the Y and some supplementary film clips they would be watching before the interview. (Since none of this info is helpful to the home viewer, I have no idea why they did not just begin the clip when the interview starts at the end of the film.) Once the discussion actually starts, it's quite funny and friendly and full of interesting production anecdotes. There's an annoying audio buzz for the first 10-15 minutes, but eventually it is resolved.