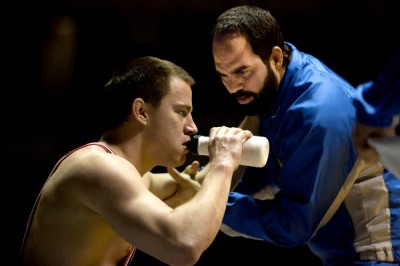 On October 21st, 2013 I saw a trailer for Foxcatcher and instantly knew that it would be an Academy Award contender. I waited all this time to see it, building it up in my mind all the while, but I'm happy to say it lived up to all my expectations. It's been nominated for Best Actor (Steve Carell), Best Supporting Actor (Mark Ruffalo), and Best Director (Bennett Miller), though not for Best Picture. Still, the Academy saw what I expected to see; a great film whose story was portrayed by amazing actors. For years I've been saying to anyone who'll listen that Mark Ruffalo might be the most under-rated actor of the last 20 years, but the dramatic talent of Steve Carell is a bit more of a surprise. The two, along with a solid performance from Channing Tatum, deliver a film in Foxcatcher that is more than powerful, something other than intense, and goes far beyond creepy.

This is the true story of Olympic athlete brothers Mark & David Schultz. After they both won gold in the 1984 Olympic Games for wrestling, they would return to their normal lives; David as an instructor and Mark as his pupil. Mark was young, physically gifted, though not extremely bright, and had a great chance to repeat his medal-winning performance in 1988. But he was tired of being in his big brother's shadow, a brother who was half teacher and half father. So when, out of nowhere, a man named John du Pont asked Mark if he could to be his sponsor and mentor, Mark was only too glad to make a change. Du Pont was the heir to the fortune of the most powerful family in America, a lonely man who called himself Golden Eagle and wanted to be a wrestling coach. He & Mark began what would be a complicated relationship, one that resulted in both championships & heartbreaks, and would end as unbelievably as it started. 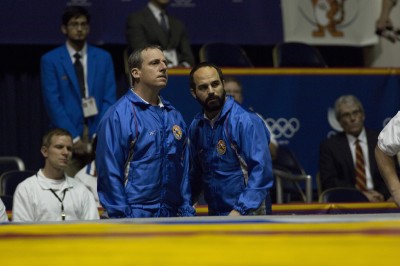 What an incredibly strange true story, one that's almost too odd to be believable. This really happened; the wealthy John du Pont contacting Mark Schultz, taking him under his wing, paying for everything, creating a wrestling facility right on the Foxcatcher property, becoming the "coach" he so desperately wanted to be. And in the background is David, the concerned brother who would eventually join the team, even working for du Pont after Mark had moved on. And the insanity of the events of this plot are hard to watch. The secrets, the inappropriate relationships, the pushing of mind & body, and ultimately the finale of this story; it's all hard to accept, difficult to watch, but a depiction of real life. It takes the film to another level, that this is all true, though some of the details are being refuted by Mark, who isn't painted in the most intelligent of lights. It's a movie you have to see to believe, if you don't remember the headlines of this time.

But apart from the story aspect, the acting speaks for itself. Steve Carell is phenomenal as John du Pont, hardly recognizable as himself. Part of that is the costume; fake nose, teeth, eyebrows, odd clothes. But most of it is his performance. It's haunting really, so quiet and so intense, so crazy in such an obvious way and in a manner that can be scary at times. Carell was perfect and definitely deserves his Oscar nomination. Mark Ruffalo is no less spectacular as David Schultz. I was amazed watching him move, the way he held his arms like a wrestler would, the way he stood, spoke, moved, and thought, all in such a convincing manner. He's just so great, so able when it comes to any role. He won't win Best Supporting Actor, that award will go to J.K. Simmons from Whiplash, but that's no knock on his performance. And even Channing Tatum was strong is his lead role, not reaching the other actors' level perhaps, but holding his own and acting as the hub the story would revolve around. Foxcatcher is a movie of mood, of uncomfortable story, of silent moments that demand that you watch even when you want to turn your eyes away. 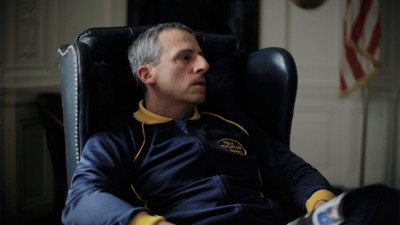