The latest in a continuing series of reviews written by by guest-reviewing wife, who tackles the releases I'd rather not watch.

In 10 Words or Less
All animals are cute, but puppies are the cutest!


What's more adorable than kittens? Puppies! And kittens playing with puppies and puppies playing with other baby animals! The spectrum of antics in this second season of America's Cutest ranges from sleepy puppies and kittens to daredevil puppies and kittens to sweet-as-sugar-and-then-some puppies/kittens. Each episode consists of seven Top Five countdowns with the category winners advancing to the episode finals for America's Cutest, an award with no apparent prize attached. There are six 42-minute episodes, three for cats and three for dogs.

The series is a mix of Tosh.0 and Best Week Ever, as a panel of Animal Planet/internet celebrities and experts, including the stars of Tanked, My Cat From Hell and Pit Boss, a few veterinarians and Buzzfeed's Matt Stopera and Perez Hilton, watch animal videos from the internet and comment on them, though most of the time they are just narrating (with the vets offering the most insight.) They are really just window dressing, wrapped around the videos you see daily in your Facebook feed, which is the main event and the reason you're watching this show at all.

The whole tournament concept is pretty pointless, mainly because it makes no sense. The show is called America's Cutest, but half the categories have nothing to do with cuteness, like ones in which the cats show great athletic ability or an odd behavior. If cuteness was key, these episodes would be over much quicker. And though it may be subjective, the decisions in ranking the videos are pretty hard to understand. Even if it doesn't matter in the end who wins, if the decisions seem nonsensical, it can get very frustrating, and you'll lose interest. 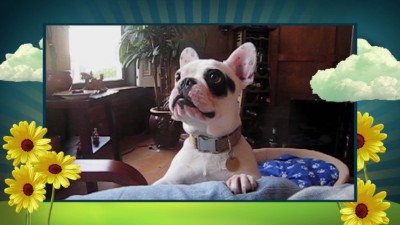 I am the first to admit I'm not the biggest fan of cats. I'm not sure why or when I developed a, "not so fond of you" vision of cats, but it happened. For me, cats just aren't as snuggly and lovable as dogs. Cats look at you and say, "When I'm ready to have you in my presence, I'll appear, then run away just as fast." Dogs on the other hand are always around, hugs and kisses, "I can't get enough of you and I want more" type of animal. But in the interest of reviewing this dvd and wanting to show my eight-year-old that I'm accepting of all God's creatures, I sat and watched and watched and watched. And to my surprise, I semi-smiled when the three cat episodes were on.

My daughter, Emma, sat and watched this season with me and her take on it was very similar to my own. We were happy and excited to see so many videos of cute and adorable puppies and kittens. Emma did feel that the show's criteria for most adorable at the end of each category was off in certain areas, but we discussed with her that everyone is allowed their own opinion.

Emma had a very hard time deciding which episode was her favorite and after much discussion, she chose them all! When you're eight years old, anything and everything that has to do with tiny little balls of fluffy fur is overwhelmingly too much to handle. As we watched each episode, the sounds of "Ohhhh….ahhhhh…..Omg!" became increasingly more pronounced. She did enjoy watching the cat/kitten episodes, but her excitement wasn't nearly as amplified as it was for the dogs/puppies. Overall, she enjoyed this season very much and eagerly awaits next season to see what those little adorable furballs have in store for us. 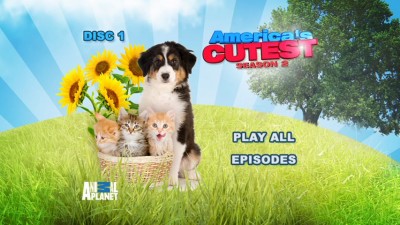 The DVDs
This season of America's Cutest is spread over two DVDs, which are packed into a standard-width keepcase with a tray. The DVDs offer static anamorphic widescreen menus with options to play all the episodes or select shows. There are no audio options, but closed captioning is available.

The Quality
The anamorphic widescreen transfers are very nice when it comes to the greenscreened interviews, as there are no problems with the image, though the internet clips vary in quality, from the sharp stuff to very grainy, low-fi footage. The show look good for the most part.

The Dolby Digital 2.0 soundtracks on these episodes are the usual basic-cable mixes, with nothing that would really demand anything more interesting, between the studio interviews and the internet videos. The sound is clear and easy to understand though.

The Extras
Though the discs focus on canines and felines, the bonus feature opens the doors to the rest of the pet kingdom, with a 43-minute episode featuring a variety of different animals, including rabbits, birds, reptiles and more (though there are several cats and dogs on hand as well.) Added to the previous vet commentators are comedian Chris Hill, Must Lo0ve Cats host John Fulton and animal trainer Andrea Arden. Oddly, this extra is far more consistently cute than the main feature. 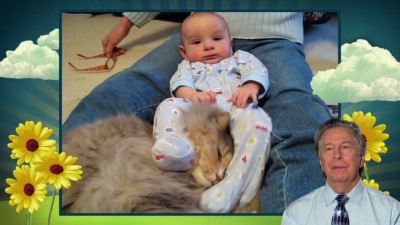 The Bottom Line
If cats or dogs are your thing, these episodes are enjoyable to watch, but the commentators and the "competition" format don't add much, so you have to question whether you need to pay for cute animal videos when you can find hundreds more by turning on your computer. The discs look good, and you do get an extra 43-minute episode which expands the pet roster, but it's not a cheap option for getting your cute fix.