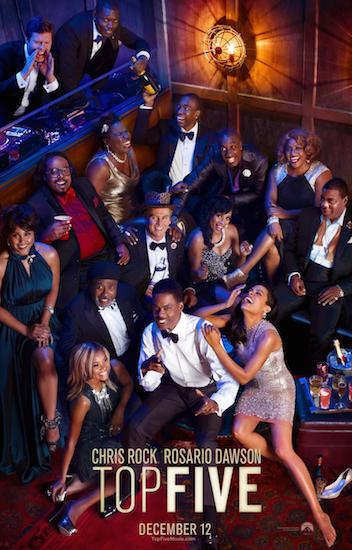 Chris Rock joined the upper echelons of the stand-up comedy game nearly twenty years ago, and even though he hasn't released an hour-long special in seven years, it's that work onstage that defines his career. Much like one of his heroes, Richard Pryor, it seems like Rock has struggled for years to find film roles that manage to showcase even a fraction of the genius on display when Rock is alone in a comedy club with a microphone.

Oddly, unlike Pryor, Rock is a key player in the watering down of his onscreen image. Most of his starring vehicles are self-produced, self-written, and sometimes even self-directed. And up to this point, they seem to be marked by odd divided tendencies; on one side is the desire to demonstrate Rock's broader cultural interests and on the other is the desire to make Rock into a mainstream leading man. Down To Earth modernized one of the big hits of '70s-era "New Hollywood," I Think I Love My Wife took its inspiration from one of the most esoteric members of the French New Wave, Eric Rohmer, and Head of State concocted the crazy left-field notion that a black man could run for U.S. president. But in each case, the finished products seem overworked, with all the rough conceptual edges sanded away and too many jokes softballed toward the cheap seats, squandering the potential for smart, sharp comedies on par with their creator's best work.

Top Five shows writer-director-star Chris Rock finally demonstrating the confidence to fully follow his auteurist instincts and, despite some unevenness, it's easily his best film. The film casts Rock as Andre Allen, a former stand-up-turned-actor that seems like a biographical composite of Rock and a half-dozen other black entertainers, like Eddie Murphy, Martin Lawrence, and Chris Tucker, to name a few. Andre made big bank in a bear suit, in a cheesy action-comedy series called Hammy The Bear. The bear has become the bane of Andre's existence, so he has intentionally tried to steer himself toward serious films, like his newest effort, the period drama Uprize, which casts him as rebel slave Dutty Boukman, who helped start the 18th Century Haitian Revolution. On the posters for Uprize, Andre looks more puzzled than powerful, one of many hints that his desire for dramatic credibility is more than a little misguided.

On the same weekend that his film has opened, Andre must also run errands for his impending media-blitzed wedding to reality TV star Erica Long (the forever-welcome Gabrielle Union) while simultaneously subjecting himself to a New York Times profile by around-the-way-girl Chelsea Brown (a note-perfect Rosario Dawson), even though the Times has consistently trashed Andre's films for years. It takes a while for Top Five to articulate its oddly elaborate set-up, which also involves Andre's relatively new sobriety from alcohol and its effect on both Andre's film choices and his decision to get married. But once all that exposition is out of the way, Top Five finds a pleasant groove anchored by Rock and Dawson's near-constant banter in front of the camera and Rock's keen instinct for big comic setpieces behind it.

Rock has peopled the movie with dozens of comedians in supporting roles. Some of them play themselves (Adam Sandler, Whoopi Goldberg, Jerry Seinfeld, Jim Norton), although most of them are given scene-stealing characters to portray. Brian Regan is great as a misguided radio engineer who tells Andre to put more "stank" on a radio promo he is recording. Kevin Hart is his typical hyperactive self as Andre's put-upon agent. JB Smoove is Andre's somewhat co-dependent right-hand man. Anders Holm from Workaholics plays Chelsea's sexually confused boyfriend. Cedric the Entertainer is a hilariously skeevy Houston comedy promoter. When Andre takes Chelsea to see his family in Harlem, his dad is Ben Vereen and most of the rest of his relatives are SNL regulars or alums. The cavalcade of comedy stars who are ready to play is seemingly endless.

On his director's commentary track, Chris Rock gives the distinct impression that he would like to be another Woody Allen. Top Five shows that, like Allen, he can mine his own experience for both resonant drama and laughs. He's looking more and more like a solid director with each passing film, but he needs to up his rate of productivity if he ever wants his film work to stand as high in the cultural esteem as his stand-up. Considering Andre's arc in this film, in which the former stand-up realizes where his gifts and power truly lie, maybe a new flood of good (great?) work from a re-energized Chris Rock is already on the way.

The Blu-ray
Paramount has packaged Top Five as a combo pack with the Blu-ray, a DVD (feature film only; with English, French, and Spanish 5.1 surround audio options, plus an English Descriptive audio track; also English, French, Spanish, and Portuguese subtitles, plus English closed captioning), and a code for Ultraviolet Digital HD streaming.

The Video:
The AVC-encoded 1080p 2.40:1 presentation is as good-looking as one would expect for a brand-new movie. The digitally-shot images have a frequently film-like look; only one sequence (which Rock explains on the commentary was slightly sped-up in post-production) has an excessively video-ish smoothness in appearance. The clarity and detail is top-notch. The colors are rich and saturated. There are no noticeable issues with noise; the many dark night scenes have strong shadow detail with no crushing. A great transfer.

Special Features:
All the special features are exclusive to the Blu-ray only.


Final Thoughts:
Chris Rock has finally crafted a vehicle for himself that takes full advantage of his gifts as a joke-teller and a storyteller. The Blu-ray looks and sounds great. The bonuses are a little hit-and-miss, but worth a look. While one hopes for even better films from Rock in the future, this home video presentation offers plenty to enjoy right now. Highly Recommended.