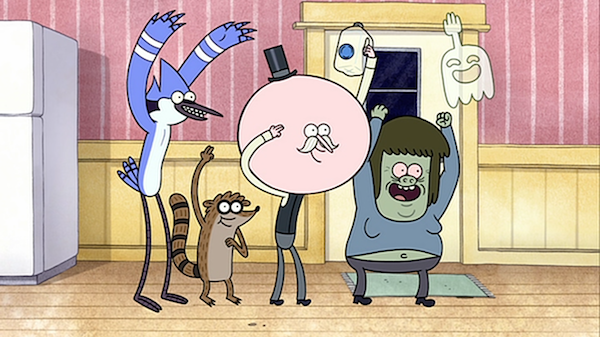 Hardcore Regular Show fans are still impatiently waiting on a complete fourth season DVD and Blu-ray release -- come on, the sixth season is airing on TV now! -- but Cartoon Network is doing what it likes to do, offering up 16 randomly shuffled 11-minute episodes in a single DVD "pack." This one is dubbed the Mordecai Pack, after one of the show's two main characters. And based on the cover art, in which Mordecai the bluejay reaches his hands his high above his head and presumably yells "Oh!" (as in the show), it's supposed to be a compliment to last fall's Rigby Pack, which features cover art of the other main character, Rigby the raccoon, doing the same thing.

There's one little hitch, though. The title of the Rigby Pack made perfect sense, as most of the selected episodes were all driven by Rigby and even often touched on the same theme: how Rigby's stubbornness and laziness leads to disaster. The Mordecai Pack is far less focused than its predecessor; in fact, only about half of the disc could really qualify as Mordecai-driven stories. On top of that, the disc shuffles the chronology of the episodes (mostly taken from season 5, although there is one story from season 3, three from season 4, and one from the new sixth season). This effectively fractures the story arc of Mordecai's romantic life. Early in the disc, we see Mordecai dating his new girlfriend CJ (voiced by Linda Cardellini), but then the disc jumps back to a time when they didn't exactly like each other and even delves into Mordecai's breakup with his last girlfriend Margaret (their courtship was laid out -- in chronological order, mind you -- in last February's Mordecai & Margaret Pack) before recommencing Mordecai and CJ's relationship and continuing on.

But wait, I've gotten ahead of myself. For the uninitiated, here's the gist of the show. Two twenty-something slackers, bluejay Mordecai (voiced by show creator J.G. Quintel) and raccoon Rigby (voiced by William Salyers) work in a park and live on site with their eccentric co-workers. These include a yeti who skips, named Skips (voiced by Mark Hamill), a sweetly naive giant lollipop named Pops (voiced by Sam Marin), an overweight, Frankenstein-looking dude named Muscle Man (also Marin), a ghost with a hand on his head called Hi-Five Ghost (Quintel), and an occasionally glimpsed goat intern named Thomas (voiced by Roger Craig Smith). Their boss is a perpetually ticked-off gumball dispenser named Benson (Marin). Shaped by a love of '80s pop-culture, video games, and ridiculous sci-fi, typical episodes begin with a fairly normal, almost sitcom-y premise (e.g., the fellas want to try the "every meat burrito" at a local restaurant but they need to borrow a car because it's drive-through only) that inevitably escalates to fantastic extremes (they end up borrowing a car full of shag carpet upholstery that is hiding a fugitive who steals their burritos, causing them to burrow into the shag to defeat him). It never reaches the heights of complete WTF!? randomness of something like Adult Swim's Aqua Teen Hunger Force, but the reality of the Regular Show universe is pleasingly elastic.

Despite my quibbles about presentation, this remains a solid collection of episodes. Like its de facto sister show on Cartoon Network, Adventure Time, Regular Show seems to improve the longer it is on the air, finding ways to make its ridiculous stories hit poignant notes about humanity and friendship. The episodes "Tants" and "Bad Portrait" are both great examples of this; in both, Mordecai and Rigby scramble to fix something they destroyed (an elaborate gift from Pops and a portrait tribute to Benson, respectively) and essentially prove the strength of the friendship despite not being very good at what they do (in the first story, a troop of heavily armed guards is called on them for bootlegging while, in the second, a Bob Ross-like ghost must help our heroes fend off angry two-dimensional doppelgangers of Benson with paint [er... long story]). "Guy's Night" is an oddly touching episode in which Pops desperately tries to be "one of the guys" by chugging a gallon of milk, only to end up physically -- and metaphysically -- ill.

As I stated above, a major portion of this collection is devoted to Mordecai's relationship with CJ, who is an anthropomorphic storm cloud shaped like a young woman. They make a cute couple, but like any couple, they have to weather (ha ha) some inevitable growing pains. In the episode "Real Date," Mordecai and CJ try to go on their first real date, only to have the owner of an OKCupid-like dating site constantly trying to break it up so that Mordecai won't settle and will instead continue to play the field -- and use his website. In the episode "Maxin' and Relaxin'," Mordecai reluctantly takes CJ home to meet his parents (voiced by Katey Sagal and Ed Begley, Jr.) so he can find one of his old mixtapes, only to be horrified by his mother's smothering behavior. In "Portable Toilet," a childish dare puts Mordecai and Rigby into mortal danger and their girlfriends, CJ and bespectacled mole Eileen (voiced by Minty Lewis), must pluck up the fortitude to rescue them.

Some of the episodes from earlier seasons -- "Bet to Be Blonde," "Country Club," "Caveman" -- are not quite as strong as the episodes around them, but I'd say that once again Cartoon Network has included no out-and-out misses. But here's hoping that they will concoct a more inspired concept for their upcoming mix-discs, because these collections do work a little bit better when it's not a total theme-less jumble. 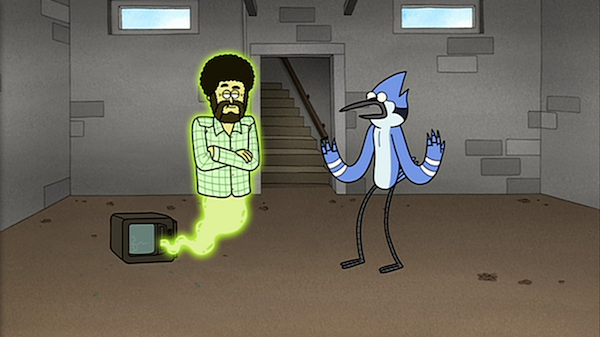 The Video:
As fans have come to expect, Cartoon Network offers up a strong widescreen 1.77:1 image that has vivid colors and very few noticeable compression issues.

The Audio:
No concerns with the Dolby 2.0 stereo audio mix. The end theme music by Mark Mothersbaugh rattles my walls every time it pops up. The rest of it all sounds great. One subtitle option: English SDH.

Final Thoughts:
Another solid batch of random episodes, released so that Cartoon Network can continue to milk your fandom for every penny that it's worth. If you avoid these compilations on principle, I'm sure you will continue to do so. If you can't help yourself, then don't feel bad. This collection proves the show just keeps getting better. Highly Recommended. 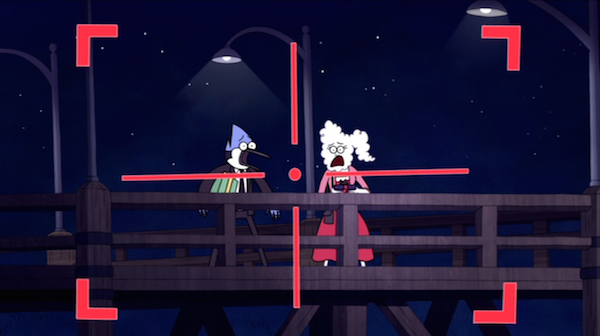