The photos accompanying this review are taken from promotional materials and do not reflect the quality of the Blu-ray under review. 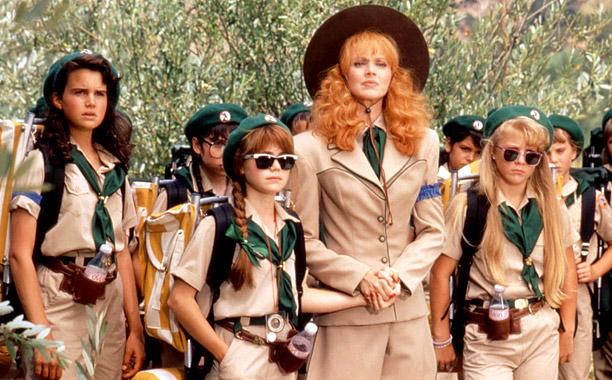 Why has the goofy 1989 comedy Troop Beverly Hills remained a perennial favorite for over two and a half decades? Its story is pretty formulaic, many of its jokes have not dated well, and its characterizations are thin and sitcom-y. One is tempted to blame its persistence on '80s nostalgia, but hey, no one's bothering to put out 4K-remastered Blu-ray reissues of those '80s body-switch movies I loved so dearly as a boy (some day, Vice Versa, some day...)

After re-watching Troop Beverly Hills for the first time in decades, I think I have figured out why this particular kid-targeted comedy has stuck with us. It's a real drag to admit it, but this is the rare movie where the story hinges on a bunch of female characters (pre-teens or otherwise) liking each other and banding together for a common purpose. Sure, it's full of (fairly toothless) jabs at the entitled attitudes of its upper-class underdogs, but its core is one of good-natured sweetness. Plus, the way the movie champions the virtues of friendship and teamwork is appealingly optimistic.

Shelley Long stars as the slightly vapid Phyllis Nefler, a Beverly Hills housewife who responds to her impending divorce by going on a shopping spree with her future ex's credit card. Coach's Craig T. Nelson plays the estranged hubby, a muffler magnate (get it: "Nefler's Mufflers"?) named Freddy, who doesn't seem to have fallen out of love with Phyllis so much as he has just become tired of her inability to follow through on anything she starts. (Like that finest of underdog films, Rocky, this movie puts a premium on the ability to "go the distance.") When Phyllis's daughter Hannah (Jenny Lewis, a decade away from breaking out as a singer-songwriter) asks her mom to become the leader of her Wilderness Girls troop, Phyllis is offered another chance to prove she can actually see something to completion.

The film wrings some chuckles out of Phyllis's seeming unsuitability for the task -- she wears a fur coat on a camping trip, then books her troop into a lavish hotel suite when their camp site gets rained on -- but clearly her seemingly skewed sensibility is right in line with that of her precocious, pampered charges, and she has a knack for understanding their innate potential. Meanwhile, Hill Street Blues' Betty Thomas plays the vaguely butch heavy, Velda Plendor, who bristles at Phyllis's fashion-conscious unconventionality. She has a very strict idea of what it is to be a Wilderness Girl and finds the invented activity patches that Phyllis awards to her girls -- for jewelry appraisal, shopping, attending divorce court, etc. -- as an affront to what the organization stands for. Velda sends meek underling Annie (Mary Gross) to infiltrate the troop and dig up dirt on Phyllis's free-wheeling methods.

Director Jeff Kanew has plenty of experience in the snobs-vs.-slobs subgenre, having helmed Revenge of the Nerds, but his approach here seems to consist of: "When in doubt, throw in a pratfall." The script, by ex-SNL writers Pamela Norris and Margaret Oberman, from producer Ava Ostern Fries's autobiographical story, is snappy and well-structured, but it barely leaves any room to get to know the girls of Troop Beverly Hills beyond superficial quirks and problems. Phyllis is the only character we meet in depth, and she's pretty much a cartoon character. Shelley Long does a good job of giving Phyllis something like two-and-a-half dimensions, but mostly she's a sentient Theadora Van Runkle outfit.

I don't mean to sound so grumpy. It's hard to hold too much of a grudge against something as sunny and well-meaning as this film. The young actresses who play the troop members, including Life Goes On's Kellie Martin and the Spy Kids movies' Carla Gugino, are all bright and entertaining. Shelley Long offers more evidence that she has been sorely missing from the last few decades of mainstream movie comedy (her appearance in costar Betty Thomas's The Brady Bunch Movie notwithstanding). I was surprised to find myself laughing out loud at Troop Beverly Hills a lot. As far as the film's lingering impact is concerned, maybe that's all that really matters. 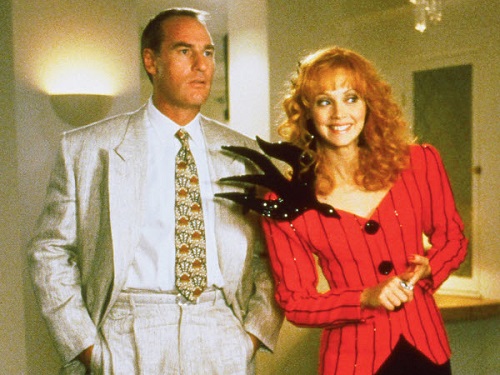 The Blu-ray
The Blu-ray comes packaged with a code for Digital HD Ultraviolet streaming.

The Video:
Touted as being "Mastered in 4K," the AVC-encoded 1080p 1.85:1 transfer is outstanding. The image is free from film defects, and the natural film grain structure has not been scrubbed away. The film is shot mostly in a high-key style and the transfer nicely reproduces both the bright colors of Phyllis's "everyday" world and the muted beige and green of the Wilderness Girls. Many recent Sony catalog Blu-rays, such as My Girl, have been noted for weird black crushing during dark scenes. This is mostly not an issue for this brightly lit film, although there does seem to be an unusual contrast imbalance in the film's brief night-time scenes. I was not initially bothered by this when I watched the film, but when I heard about this recurring issue, I went back and saw that it was indeed (somewhat subtly) present in this transfer. I don't think it is enough of a flaw to entirely write off this otherwise excellent video presentation.

The Audio:
The main DTS-HD MA 5.1 surround mix is perfectly adequate if not exactly gutsy. The '80s-era Beach Boys song that plays during John Kricfalusi's opening animated titles is brash and nicely spread among the speakers. Otherwise, the dialogue is perfectly clean and understandable. The disc also offers a lossy French 2.0 mono audio mix, as well as English, English SDH, and French subtitles.

(HD, 14:25) - A new interview with star Long, in which she talks about how she came to the project and how it developed from there. She offers up some interesting anecdotes (though the film featured a lot of timely cameos, she regrets that Wolfgang Puck was cut from the film), but the whole piece is way too long.

Final Thoughts:
Even though it never entered heavy rotation at my house as a kid, I was pleasantly surprised by how often I just laughed at Troop Beverly Hills. Sony's new reissue is great-looking, and is presumably light-years ahead of the pan-and-scan DVD edition. The bonus features are a bit of a letdown, but even so, the whole package easily comes Recommended. 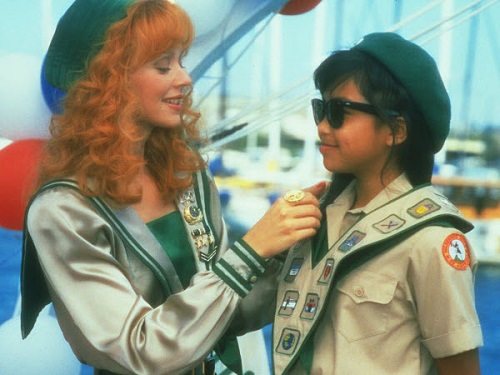