Fox Cinema Archives // Unrated // January 27, 2015
List Price: $29.95 [Buy now and save at Amazon]
Review by Stuart Galbraith IV | posted February 21, 2015 | E-mail the Author
When the Fox Broadcasting Corporation announced in August 2013 that they would produce an American remake of Broadchurch (2013), the eight-part British crime drama about the murder investigation of a 12-year-old boy in a small, coastal village, the whole enterprise seemed singularly misguided and pointless. Having seen both Broadchuch and its American remake, retitled Gracepoint (2014), in their entireties, I'm more convinced than ever.

Broadchurch won three BAFTA awards (Best Drama Series, Best Actress, Best Supporting Actor) and earned high ratings. The ITV show eventually aired on BBC America but, of course, airings on that niche digital cable/satellite network didn't get a lot of attention nor draw mainstream viewers. One can only speculate why Fox didn't simply acquire broadcast rights to Broadchurch instead of going to the time, trouble, and expense of remaking it. Maybe they thought viewers would be put off by all the "funny accents."

The remake, Gracepoint, is virtually a scene-for-scene, line-for-line remake with only cosmetic changes and a couple of gimmicky additions at the very end of the final episode. Though much of it is on par, quality-wise, with the original, absolutely nothing in it, big or small, surpasses what came before, and in numerous ways it's subtly, significantly worse. If it had deviated sharply from the original it would be easy to judge Gracepoint on its own merits, but since the original exists and is widely available, comparisons are just and inevitable. Had Broadchurch never existed, Gracepoint could be regarded as an ambitious, above-average crime drama, but when compared to its predecessor it's a frustrating if still engrossing disappointment.

Fox's three-disc DVD set of Gracepoint also disappoints. The transfers aren't very good, exhibiting as they do an enormous amount of edge-enhancement and/or combing problems particularly evident in the first episode. (I can't say for sure whether the problems lessen later on or if I simply grew more tolerant of the problem.) The set includes three short making-of featurettes straining to avoid acknowledging the British series it remakes. 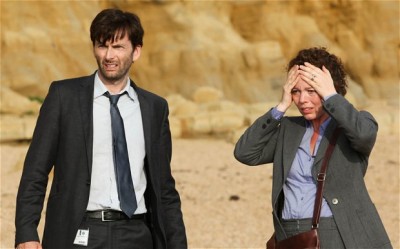 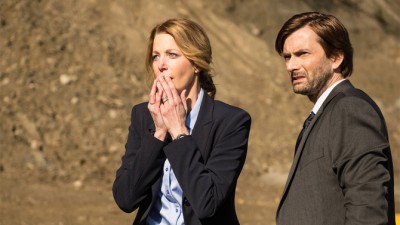 
All of Gracepoint focuses on the investigation of a single crime, and how that crime and its investigation, along with intense, exploitative media scrutiny, impact the small seaside community (in Northern California near the Oregon border) in which it is set. Though much of the focus is on the lead detectives, played by David Tennant and Breaking Bad's Anna Gunn, it's as much a Robert Altman/Alan Rudolph-type tapestry, with a dash of 24-type cliffhanger suspense thrown in.

It begins with the mysterious death of an 12-year-old boy, Danny Solano, who was from a seemingly normal middle-class family. Detective Ellie Miller (Gunn), just back from a family vacation in Mexico and fully expecting a promotion upon her return, is doubly upset. Her son, Tom (Jack Irvine), was a close friend of Danny just as she is of Danny's mother. Further, she loses her promotion (and thus also the ability to lead the investigation) to outsider Emmett Carver (Tennant), a misanthropic, ailing man who apparently badly botched his last major murder inquiry.

As the scope of the investigation broadens, more of Gracepoint's citizenry fall under suspicion, like the peeling of an onion. Amidst their profound grief, personal problems among the Solanos - mother Beth (Virginia Kull), father Mark (Michael Peña), and their 15-year-old daughter, Chloe (Madalyn Horcher) - bubble to the surface. Ellie tries her best to shield her friends from unnecessary trauma but Carver demands a level of probing professionalism for which she's ill prepared.

Other residents of the town also fall under suspicion and yet more dark secrets are exposed, though few lead to any conclusive answers about Danny's fate. Meanwhile, ambitious young local reporter - and Ellie's nephew - Owen Burke (Kevin Zegers), against the wishes of his community-conscious editor, strikes an imbalanced alliance with an equally upwardly mobile writer for a Rupert Murdoch-styled national newspaper, she far more experienced in the art of personal manipulation. (As Fox is itself owned by Murdoch, this aspect is subtly downplayed.)

(Spoilers, depending…) The producers of Gracepoint promised a different ending from Broadchurch, hinting strongly that the killer would turn out to be a different character. But that was a cheat, one that sharp-eyed viewers who'd seen Broadchurch will be able to guess before the Big Reveal. Rather, the only major change at all is the writers have stuck two additional twists at the very end of the last episode. These changes don't enhance Gracepoint at all. Broadchurch's ending was improbable but thematically justifiable and certainly surprising. With the new additions, Gracepoint's addendums are merely ridiculous, stretching an already incredible ending past the point of any believability.

The producers were also being disingenuous claiming that Gracepoint's two additional episodes, ten versus Broadchurch's eight, allowed for more character nuances and whatnot, but that's not what comes across. I didn't have copies of both scripts in my lap while watching Gracepoint, with only my recent memory of watching Broadchurch to go on, but Gracepoint struck me as slightly more superficial, less probing than the original show, even with the extra running time. (It should be noted that Broadchurch ran about four or five minutes longer per episode than Gracepoint, meaning the difference in running times was more like an episode-and-a-third longer.)

Further, the demands of American network television, i.e., constant commercial interruptions, meant that Gracepoint's writers felt compelled to end each of the shows many "acts" with a kind of cliffhanger, lest the viewer switch channels. This not only damages the deliberate pacing of the narrative and the ominous atmosphere each episode of Broadchurch generated, these cuts generally break with a highly repetitive, obvious musical sting that immediately grows tiresome.

The single biggest problem with Gracepoint is the casting of Anna Gunn as Det. Ellie Miller. Olivia Colman was brilliant in the original, projecting just the right balance of empathy and intelligence. The entirety of Broadchurch revolves around this; that's its main theme. Tennant's character doesn't believe Ellie is up to the task because she's too compassionate, too close to the community she's trying to serve, and thus unable to be dispassionate and objective in her investigation, particularly when interviewing suspects that are friends and neighbors she's known for years. Gunn clearly is a talented actress, but critically she lacks this all-too-important vulnerability. The lines are the same, but she just never quite gets that vital character component across.

In addition to Broadchurch creator/co-writer Chris Chibnall co-executive producing Gracepoint, actor David Tennant reprised his role as the lead detective. He wasn't the American producer's first choice; Tennant had to audition like everyone else. For Gracepoint, the Scottish actor affects an American accent which, though technically okay, is as much a distraction. The effort he puts into it seems to take away from the subtleties he was able to bring to Broadchurch. Another distraction was the decision by someone to revamp the actor's hair, which in Gracepoint almost looks like wig.

Another problem with Gracepoint is that most of its supporting characters, partly because of the casting, partly because of the wardrobe, makeup, and hair, play more like stereotypes. The editor of the local newspaper is now a clichéd lesbian, all but wearing black turtleneck sweaters with a big medallion on a heavy chain. The local priest has that sweaty-lipped, Klaus Kinski sinister look. Ozploitation icon Jacki Weaver is miscast as Susan Wright, the standoffish, solitary woman living out of a trailer and clearly up to no good. Pauline Quirke in the original was far more intimidating. Nick Nolte (who nowadays talks like Lawrence Tierney with laryngitis) was an interesting choice to play the tragic character originally essayed by Game of Thrones' David Bradley, but the American script does him no favors.

In the case of his character and others, it felt like certain scenes were diluted and/or rearranged in a manner that hindered their effectiveness. This certainly seems to apply to Nolte's character, whose revelatory backstory was far more effectively rendered in the original. Gracepoint also seems to have dialed back considerably Broadchurch's condemnation of news media vulture culture. In Broadchurch, voracious news crews have a profound negative impact on the small community but, with a nearly identical script, Gracepoint seems to be implying the problem is more a case of a few bad apples rather than the media itself, a Brian-Williamsing of much broader problems.

Broadchurch was filmed in 1.78:1 high-definition but looks only fair on DVD. Throughout the series are annoying edge-enhancement and/or combing effects that damage the presentation substantially. The ten episodes, totaling 465 minutes of running time (including lengthy recaps), are accompanied by a quite good 5.1 Dolby Digital Surround soundtrack. The three discs are region 1 encoded.

Supplements include a three brief behind-the-scenes featurettes: "Who Dunnit?" "The Making of Gracepoint," and "The Art of Visual Effects." These are pretty superficial and go out of their way to avoid mentioning the original series.

On its own terms Gracepoint is reasonably compelling - I had intended to watch just the first few episodes and skip ahead to the last one, but was interested enough that I stuck it out and watched the whole thing - but it's only about half as good as Broadchurch. Interested viewers should most definitely watch Broadchurch's Series 1 first, then take a look at this, more as an example of how not to remake a successful series. For everyone else, Skip It.