NOTE: The accompanying stills are taken from promotional materials and do not reflect the quality of the Blu-ray under review. 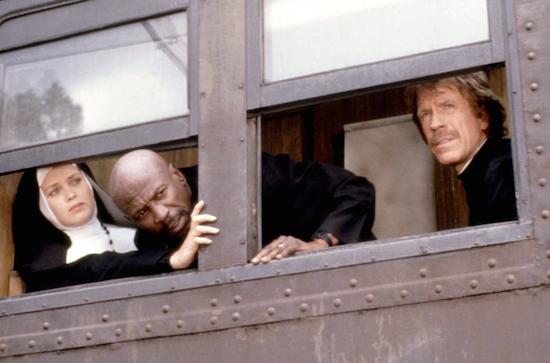 It's a running theme for many movie fans that as they get older, their reactions to different movies change. Some serious drama that seemed dull becomes thought-provoking. Jokes you never got in some comedy suddenly make sense. Something random you've liked continues to "hold up" and becomes a bigger part of your movie-loving identity. Or on the other hand, something you liked before now seems underwhelming and you begin to question what the hell kind of person you used to be. The adventure-comedy from 1986, Firewalker, falls squarely into that last category for me -- although I know exactly the kind of person I used to be: I was a dumb kid. And to be fair to my younger self, Firewalker was never an out-and-out favorite, despite the fact that I'd probably seen it three or four times before my age switched over to double-digits.

Seen now by adult eyes, Firewalker is clearly pretty dumb. The fellows over at Cannon Films who produced the movie seem to have had nothing in mind besides doing a quick, cheap cash-in on the craze for Indiana Jones-style adventure, with a buddy-comedy relationship thrown in, because Romancing the Stone did pretty well too. Chuck Norris and Louis Gossett, Jr., are Max and Leo, some sort of ill-defined adventurers (mellow mercenaries, maybe?) who are hired by Patricia Goodwin (Flash Gordon's Melody Anderson) to hunt down some gold that she saw in a vision. It turns out that the treasure is protected by some similarly ill-defined evil injuns, led by a semi-supernatural fella called El Coyote (Sonny Landham). Max, Leo, and Patricia make their way to a war-torn corner of Central America, where they have to pose as clergy to enter the jungle, which houses the temple, which hides the gold. They receive some help along the way from a good shaman called Tall Eagle (Will Sampson, a long way from One Flew Over the Cuckoo's Nest) and a megalomaniac army buddy named Corky (Indiana Jones's John Rhys-Davies).

Besides finally grasping the film's overall dumbness this time around, I was in for another major shock: Chuck Norris is a terrible actor. Sure, the scene where Norris gets jumped by an entire bar and fends off his attackers with roundhouse kicks aplenty is still a lot fun (both with and without ironic distance), but whenever our star is called upon to express an emotion more complex than "joshing around with Lou Gossett," his limitations are glaring. Okay okay, he's not a total loss. While Norris typically makes Arnold Schwarzenegger look like Louis CK, he does pull off one joke pretty nicely. In the lead up to the bar fight, a giant man (Fitzcarraldo's Miguel Ángel Fuentes) curses out Norris's character in Spanish. Gossett's Leo duly translates, saying, "He said your mother was a pig and your father was a dog." Without missing a beat, the outmatched Norris turns and asks, "Did he mention my sister?"

The acting vacuum that Norris creates is unfortunately not filled by his co-leads. Gossett -- who won an Oscar just four short years prior -- holds up his end of the buddy-comedy dynamic far better, but still appears to be in cruise control. He behaves like a man doing a quick guest spot on a TV adventure show he was certain would be cancelled soon anyway. Melody Anderson is pretty, but too bland to make her semi-romantic subplot with Norris at all believable, and the chaste, strictly PG-rated tone of the script doesn't help either. The supporting players fare a little better, since they don't have to carry the whole movie, but this is nobody's finest hour.

I sincerely hope when I eventually revisit Louis Gossett, Jr., in Iron Eagle -- a movie I most definitely did love as a six-year-old -- that it holds up better than this. 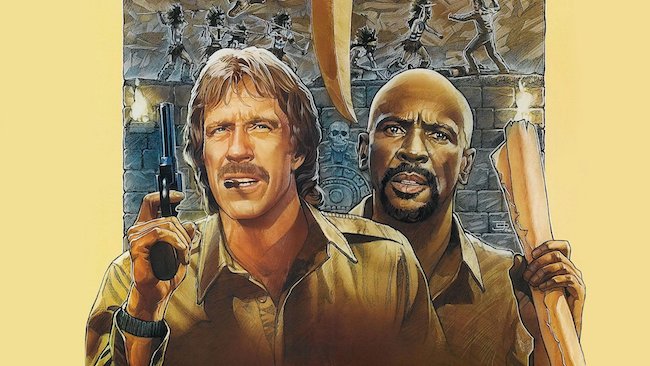 The Video:
Considering the low-budget nature of this film, the AVC-encoded 1080p 1.85: transfer on this disc is surprisingly good. There's sporadic dirt and specks -- and quite a bit during the opening chase credit sequence -- but the image is mostly clean and stable. The levels of film grain and fine detail fluctuate throughout, but not so drastically that non-videophiles would notice. A bigger concern is that in certain night scenes, the blacks get a little grey, but again, most viewers won't even take notice. In general, the colors are nicely saturated -- many shots of the green jungle look particularly lush and attractive -- and skin tones feel accurate.

The Audio:
The DTS-HD MA 2.0 audio sounds cleanly reproduced, if a bit oddly mixed. The dialogue seems slightly lower and thinner in the mix than one would typically expect, with the words almost drowned out by the fuller effects and ambience within certain action scenes. The dialogue never becomes completely unintelligible, but it sometimes feels like it's fighting the effects when it shouldn't have to. No subtitles.

Final Thoughts:
Anyone bothering to watch a Chuck Norris-Lou Gossett buddy movie in 2015 probably has an inkling of what they're in for, so Firewalker is pretty much critic-proof. Folks who know this film quite well and are pondering an upgrade should feel encouraged by the solid (not perfect, but solid) A/V specs on Olive Films' release. Others like me, who haven't thought about this film in years, are not encouraged to go for the blind buy. There are still some slivers of nostalgic fun to be had here, so if you must delve into the past, why not Rent It? 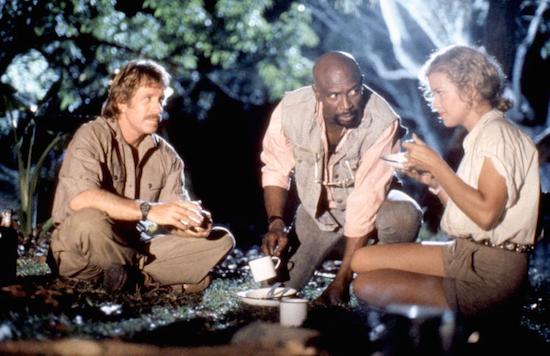