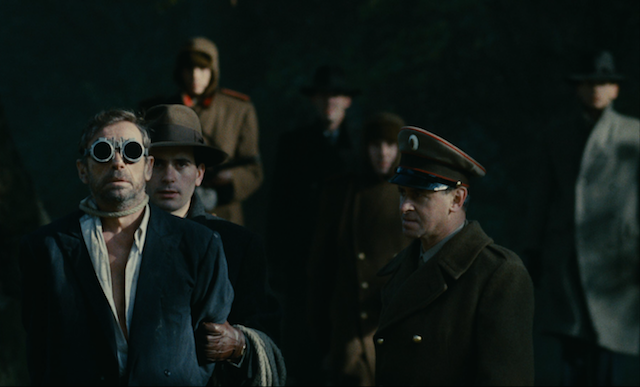 The Confession is the first of two political thrillers made by Costa-Gavras directly following the success of his best known film, Z, and newly released by the Criterion Collection. As in Z, Yves Montand stars as a victim of politics and government conspiracy. In this case, he is a Czechoslovakian government minister who is interned in the early 1950s by his comrades and told to confess his crimes against the Communist Party. Having done nothing wrong, he is duly indignant -- at first. The film, however, details the grueling process by which this poor man, called Gerard in the film, is turned into nothing more than a cog in the Party machine, testifying against himself in a trial broadcast live on national radio and later screened in movie theaters.

The script by Z writer Jorge Semprún is based on the factual memoir of Artur London, but one could be forgiven for believing that this film was intended as an update of Franz Kafka's novel The Trial, in which an everyman is dominated and demolished by an unseen authority. Most of the first hour of the film is a brilliantly rendered demonstration of how Gerard is abused physically and mentally by his captors, with insidious and subtle ingenuity. Gerard is forced to keep walking around his cell, never stopping to sit or stand. He is constantly blindfolded and taken to different rooms where he is scolded and interrogated for reasons he does not fully understand. He is told his French wife on the outside (Simone Signoret) has abandoned him and moved back to France. He is told to confess now and make it easy on himself. (Confess what?) When he is allowed to sleep, he is not allowed to lie on his side, as he would prefer.

Costa-Gavras, cinematographer Raoul Coutard, and editor Françoise Bonnot make Gerard's imprisonment feel like a never-ending journey through a labyrinth. Coutard's camera dollies energetically around in cramped rooms, making the interrogation scenes dynamic and disorienting. Bonnot mixes standard editing techniques with hard jumps and deceptive "invisible" cuts that obliterate chronology and geography. Interrogation questions bleed into each other, presumably across days and weeks, as Gerard futilely tries to maintain his grip on what he knows to be true. Whenever we see him lay his head down to sleep, he is immediately awoken in the next shot. Is he really not getting any sleep, or does it just feel like that?

What's most fascinating about this section of the film is that Costa-Gavras rarely resorts to shots taken from Gerard's point-of-view to put us in his place. Instead, we get a kind of stylized, warped objectivity that even more effectively communicates the horror of Gerard's mistreatment than the grotesque wide-angle POVs we might get from a Terry Gilliam or Orson Welles film. There are brief flashes of things Gerard remembers or things he imagines are happening in the outside world, but they remain in this unique, omniscient style.

Around the halfway point, the film gives the audience a little break. It allows us to flash-forward to 1965 to see Gerard, alive and healthy, discussing his experiences with two friends. This choice to have 1965 Gerard take over as narrator from this point is brilliant because it ends up adding a lot of interesting, effective coloring to the story. True, it removes the suspense of will he or won't he make it out of this. But in place of that suspense, it reminds the audience of the reality that is inspiring this story. It adds a layer of horror as we see Gerard's mind broken down and reshaped into something more malleable by his captors. It shows the slow development of the false narrative of his crimes that his interrogators want him to agree to -- for his own good and for the good of the Party, they assure him. As they make him sign document after document, offering tiny confessions to seemingly harmless acts, he becomes the dazed, unwitting coauthor of the fiction of his treason. Sure, we in the audience know that Gerard is going to make it out alive, but he's not going to do it as a brave iconoclastic hero, whose steadfastness to his ideals overcomes those mean old Stalinists. This is probably just going to be pure luck.

We also get sporadic glimpses of what happens to Gerard's wife Lise and their family during his multi-year imprisonment. Lise's contact with the Party is basically severed. The family is out of their government apartment into a hovel, and Lise is forced to work in a factory. Never throughout this ordeal does she question the wisdom of the Party, and later, when a thoroughly coached Gerard testifies that he was the leader of a subversive group, she initially doubts her husband rather than suspect that he was being forced to lie. The film shows that the faith that Gerard and Lise have in communism is essentially religious, so maybe it's unsurprising that Lise is better able to envision her husband as a sinner than to see that her "god" is fallible.

The Confession is a startling film and an immensely visceral experience. It is also such a tremendously well-crafted piece of cinema that I find it oddly more palatable than such an intense story typically would be. It's invigorating in its intelligence and outrage. It rarely makes a false step dramatically. The cast members are perfectly in sync with their roles, especially Montand as he tries to hold on to reality for dear life and Gabriele Ferzetti as the lead interrogator who confidently toys with his captive. Even if the film wasn't as technically brilliant as it is, these performances would make this film a must see. So go see it. 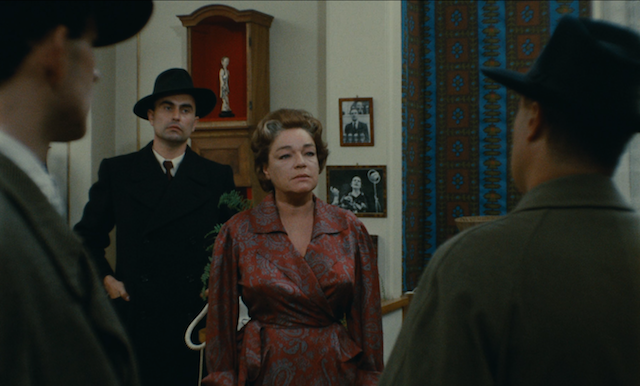 The Blu-ray
The Confession comes with a fold-out insert that includes an essay by film scholar Dina Iordanova.

The Video:
The AVC-encoded 1080p 1.66:1 transfer on this disc is beautiful. The picture is clean and stable, with an attractive amount of film grain. Fine detail and shadow detail are both excellent, especially in a number of scenes with low light or where Gerard's interrogators are presented in silhouette. The color palette is a bit muted to fit the subject matter, but the colors themselves are rich and saturated.

The Audio:
The French LPCM mono audio (with optional English subtitles) is strong and clear, with no apparent defects and satisfying subtlety and nuance in the way it deals with different atmospheric dynamics.

(HD upconverted from SD, 31:04) - A vintage French TV special on the making of the film by Chris Marker (La Jetee, Sans Soleil), who was acting as the set stills photographer. It includes some interesting B-roll, but is dominated by interviews with Yves Montand, Costa-Gavras, Artur London, and Jorge Semprún, who largely try to explain the value of this kind of film to clear-eye socialists, rather than being an anti-Communist film. Extremely interesting.

Final Thoughts:
The Confession is an outright classic that is wholly worthy of the meticulous care Criterion has taken in bringing it to home video. It grabs you with its first scene and refuses to let you off the hook until the very end. If you are unfamiliar with this film (as I was), you are in for a hell of a treat. Highly Recommended. 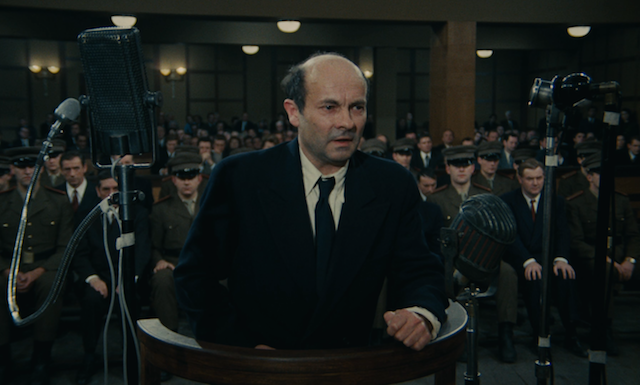