Kino // PG // May 15, 2015
List Price: $29.95 [Buy now and save at Amazon]
Review by Stuart Galbraith IV | posted May 8, 2015 | E-mail the Author
Despite lots of movies about Allied prisoners of war trying to break out of German camps, there seem to be almost none about German POWs in Allied ones. The only major films in this latter category that I'm aware of are The One That Got Away (1957), a good British film starring German actor Hardy Krüger, and the equally fine The McKenzie Break (1970), an Irish-British production with an American director and star, made in Ireland and, quite inexplicably, Turkey.

Adapted by William W. Norton from Sidney Shelley's novel, the film is extremely intelligent yet low-key, and features an excellent, Oscar-worthy performance by Brian Keith, an underrated leading man who never quite became a major star.

Kino Lorber's Blu-ray, via MGM, is a major upgrade from the latter's ages-ago DVD, despite obviously problematic film elements. 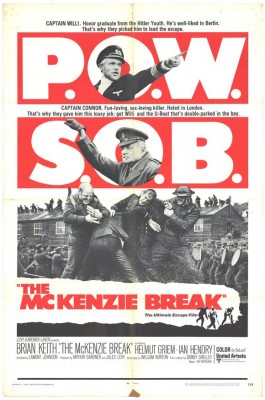 For starters, Schlüter is a former Hitler Youth and a True Believer. A backstory suggests he murdered the Germans' own previous CO at the camp, apparently a more compliant, elderly figure probably of the Weimar Republic. Schlüter and his German Navy comrades also despise the minority Luftwaffe prisoners whom, the screenplay implies, Schlüter believes are soft and pampered. Further and most interestingly, Schlüter charismatically controls his men through acts of abject cruelty ridiculing an outcast lieutenant, Neuchl (Horst Janson), accusing him of being a homosexual, and later ordering his murder, unconvincingly dressed as a suicide. "I can see your pleasure in the kill," Connor tells Schlüter.

The movie plays to Brian Keith's strength, tapped by filmmakers not nearly as often as they should have been. Keith usually played bigger-than-life types like Teddy Roosevelt in The Wind and the Lion, or gruff, Papa Bear father figures, as in The Parent Trap and his sickly-sweet TV series, Family Affair, the latter an unwise career move. But Keith's greatest asset as an actor was as a reactor, quietly studying and contemplating what the other characters around him are doing and saying, then with few words offering wry, on-the-money observations. He gets to do that and more in The McKenzie Break and, for the audience, it's fun to watch him scrutinize Schlüter and try to throw the confident, cocky German off-balance, or catch him in an obvious lie.

Keith also had a talent for languages (he was fluent in Russian, which he spoke in two movies) and dialects, and unlike most American actors that attempt one, Keith's Irish brogue seems to be spot-on.

If any of The McKenzie Break was actually filmed in Turkey, it's certainly undetectable, despite various Turkish companies and government organizations thanked in the opening credits. Maybe only the postproduction and/or scoring were done there. Lamont Johnson, primarily a television director (he segued from episodic television to prestigious TV-movies around this time, with a few features in between), does a fine job overall, particularly with the performances. The one area in which he falls short is in creating a better sense of spatial relationships and narrative clarity. At times it's a bit difficult to know where things are happening relative to parallel action elsewhere, and Schlüter's escape plans are murkily defined in some respects, though that might have been deliberate.

Kino Lorber's Blu-ray of The McKenzie Break, filmed in 2.35:1 Panavision, offers a strong transfer, a big improvement over MGM's earlier DVD. However, the film elements exhibit a lot of fading and other problems. It looks like the film was heavily color corrected, though at times the color is still a bit off in some shots, and blotchy in others. Further, while much of the film is razor-sharp, individual shots and short sequences seem to utilize secondary elements, as if this were some sort of composite of the original camera negative and dupe material, though that may have been present in the film's original theatrical release. The DTS-HD Master Audio 2.0 mono is fine, and optional English subtitles are offered.

The lone supplement is a trailer.