Kino // Unrated // May 5, 2015
List Price: $29.95 [Buy now and save at Amazon]
Review by Stuart Galbraith IV | posted May 7, 2015 | E-mail the Author
Even most fans of director Roger Corman's efficient, unusually intelligent low-budget movies haven't seen The Secret Invasion (1964), a real anomaly in Corman's filmography. Made between the production of his last two Vincent Price-Edgar Allan Poe movies, The Masque of the Red Death and The Tomb of Ligeia (both also 1964), The Secret Invasion was Corman's first of only three moderately expensive films as director. (The other two are 1967's The St. Valentine's Day Massacre and 1990's Frankenstein Unbound.) It was made for just under $600,000, still modest in 1964 dollars, but still "major studio" money: The Secret Invasion had about twice the budget of Corman's usual Poe film.

The picture is notable for its uncanny resemblance to Robert Aldrich's The Dirty Dozen, released three years after Corman's movie. Made on a similar scale, The Dirty Dozen cost nearly ten times what Corman spent on The Secret Invasion, meaning United Artists, which financed the film, sure got its money's worth.

The Secret Invasion is in many respects a war movie remake of Corman's Western Five Guns West, but it's also so much like Aldrich's The Dirty Dozen (and E.M. Nathanson's 1965 novel) that Campbell and Corman had grounds for a major lawsuit.

Kino Lorber's Blu-ray, licensed from MGM, looks great and includes a trailer along with a brief interview with the ever-smiling director. 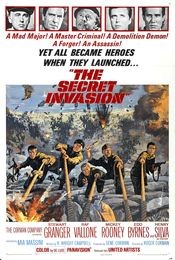 In 1943, British Intelligence officer Maj. Richard Mace (Stewart Granger) recruits five condemned military prisoners for a suicide mission - rescuing an Italian general imprisoned in German-occupied Dubrovnik, Yugoslavia - offering the pardons (a death sentence reduced to life, in one case) to those few who might make it back alive.

Similarities between The Secret Invasion and The Dirty Dozen abound. There's the same reading of each prisoner's rap sheet, "recruiting" of the prisoners, and discussion of the suicide mission. In both movies the recruits undergo training with live ammunition fired at them, and there's a sequence where several prisoners attempt an escape under their commander's watchful eye. The difference, however, is that Corman efficiently covers all this ground in The Secret Invasion's first 10 minutes, while in Aldrich's movie it takes up the entire first act, about an hour's worth of running time. (In terms of pacing, The Secret Invasion resembles Corman's St. Valentine's Day Massacre: it never lets up.)

Top-billed Stewart Granger had been a big star, first in England during he 1940s, and later at MGM in Hollywood during the 1950s, most famously starring as Allan Quatermain in King Solomon's Mines (1951), a huge success that earned nearly $10 million against a $2.2 million budget. His career went into decline after the mid-1950s, however, and The Secret Invasion was his first movie in a second-tier bracket. The actor wasn't happy and squabbled about the size of his role compared to several of his co-stars, counting lines and demanding additional dialogue. He's okay, but lacking even a tenth of the charisma of Lee Marvin in Aldrich's classic.

Mickey Rooney is also a major liability, his Irish brogue going in-and-out throughout the film. One strongly suspects Corman had in mind an actor like Richard Harris, or maybe one of the Irish actors he would have met during the productions of The Young Racers or Dementia 13 (which Corman produced), both filmed in Ireland. Instead of convincing the movie audience Scanlon is ex-Irish Republican Army, Rooney comes off more like a fallen leprechaun.

However, both Raf Vallone and Henry Silva more than compensate. At 48, Vallone's introspective, conflicted Rocca strikes all the right notes, most resembling Charles Bronson's character in Aldrich's film. Silva was already typecast as psychotic villains, sometimes with the Spanish-Sicilian actor playing Asians or other exotic types, as in Frankenheimer's The Manchurian Candidate (1962). The Secret Invasion may be his best film role, playing a cold-blooded assassin who warms up to widowed single mother Mila (Mia Massini, better known as Spela Rozin), a partisan.

(Spoilers) Campbell's script does a lot of interesting things with this character, most shockingly having him accidentally asphyxiate Mila's baby as he attempts to quiet its crying when a German patrol turns up nearby. She forgives him but he can't forgive himself. Such a scene must have been quite horrifying in 1964 (the same concept haunted Alan Alda's Hawkeye character in the last episode of M*A*S*H, in 1983) and, generally speaking, the movie is quite violent and sexually explicit (less so in the latter case) for its time: one character falls to his death and is blown to pieces by a grenade all at once. There's even a close-up of Mila's breast as she breastfeeds.

The picture looks a lot more expensive than it was. The Yugoslavian military provided troops for the big climax, but mostly it's the gorgeous Dubrovnik locations and Corman's efficiency that sells it. The picture is loaded with non-stop action and suspense scenes, with an enormous amount of coverage for a movie shot in just 36 days. (Frequent Corman scribe Charles B. Griffith worked as assistant and apparently second unit director.)

Though routine in many respects, Campbell's script tries hard and impresses frequently with the way he twists the audience's expectations, particularly during the almost ingenious climax.

Kino Lorber's Blu-ray of The Secret Invasion, filmed in 2.35:1 Panavision, is a big improvement over MGM's earlier DVD. The blood-red opening titles exhibit a noticeable combing effect, but the rest of the picture offers rich color and enormous detail throughout save for a few mildly out-of-focus shots. The DTS-HD Master Audio 2.0 mono is robust, and optional English subtitles are offered.

Supplements include a trailer and a brief but concise interview with Corman, who remembers the film fondly and has informative things to say about its production.

Not great but well above average, The Secret Invasion is Recommended.