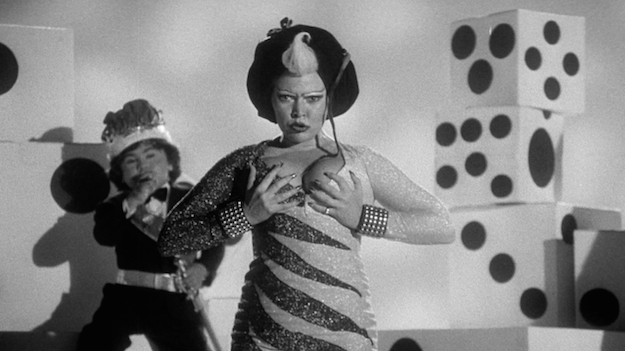 A grotesque, absurd, musical trash masterpiece, Forbidden Zone was too upsetting to gain a Rocky Horror-size following when it debuted in 1980 -- hell, it's still quite uncomfortable to watch now -- but it has slowly grown an appreciative cult, thanks in part to a nicely restored and well-supplemented 2004 DVD release, as well as a slight redux in 2008 which augmented the film's stylized black-and-white photography with some stylized computer colorization. This new "Ultimate Edition" Blu-ray slaps on many (though not all) of the bonuses from the old DVD, and even adds a CD featuring the out-of-print soundtrack album that was put out by Varèse Sarabande in the '90s.

Director Richard Elfman's debut is an onslaught of perverse sexuality, gross-out visuals, racist and sexist jokes, outlandish acting, and unfiltered imagination. The visual style grabs from '50s sitcoms, Fleischer brothers cartoons, underground comix, and German Expressionism, but on a greatly reduced budget. The sets by Marie-Pascale Elfman (who was the director's wife at the time and also stars in the film as Frenchy) look exactly like what they are: sets. But this effectively adds to the bizarre theatricality and otherworldliness of the whole enterprise. Animations by John Muto -- which combine cut and pasted photos with airbrushed drawings -- help to bridge sequences and expand the palette of the flick.

The film is an offshoot from a musical-theatrical cabaret act called the Mystical Knights of the Oingo Boingo, which incorporated old-timey, '20s- and '30s-style jazz and pop. The film features plenty of music in this vein, courtesy of composer and arranger Danny Elfman, but it also includes more spasmodic new wave sounds that one would tend to associate with Elfman's rock band (newly formed during filming), called simply Oingo Boingo.

The story of Forbidden Zone is largely beside the point but, in a nutshell, here it is. There's this group of oddballs, the Hercules family: Swedish-accented Pa (Gene "Ugh-Fudge Bwana" Cunningham), secret drinker Ma (Virginia Rose), brutal mute Grampa (Hyman Diamond), 12-year-old Flash (Phil Gordon, who is decades older than the actor playing Grampa), and daughter Susan B., aka Frenchy, so named because she went to France and started being all French. They recently moved into a house that has a portal in the basement to the sixth dimension.

After hearing about the fate of Renee Henderson (co-writer Matthew Bright, using the name "Toshiro Boloney"), a cross-dressing kid who got sucked into the portal, Frenchy decides to check it out, against her parents' wishes. When she gets to the sixth dimension, she catches the eye of the diminutive King Fausto (Fantasy Island's Hervé Villechaize). Unfortunately, Fausto's queen is the big, brassy, and intensely jealous Doris (Fat City's Susan Tyrrell, who was dating Villechaize at the time). She locks Frenchy up in the dungeon and has the Princess (Gisele Lindley, consistently clad only in panties, gloves, and high heels) prep her for torture. Flash and Grampa go through the portal to save Frenchy but they get distracted by raping prisoners and beating gorillas to death. Chicken boy Squeezit Henderson (Bright again) must then build up the courage to enter the portal and save everybody.

Oh, plus there's a dude with a giant frog head. And performance art duo the Kipper Kids. And Viva from Warhol's movies and Lions Love. And Joe Spinnell from the Rocky movies and Maniac. And Danny Elfman shows up as Satan, singing the Cab Calloway classic "Minnie the Moocher" with modified lyrics about how he wants to do the Princess.

And that's really only a mildly adequate sum-up of all the weird and wild shit that goes on in this flick.

The acting ability of the cast members varies wildly from "early John Waters" to "late John Waters." Susan Tyrrell seems to be having a particularly good time, hamming it up as Queen Doris, while Hervé Villechaize seems right at home ogling the flesh of the many oft-naked young women surrounding him. Matthew Bright, who later directed the film Tiptoes and brought the world Gary Oldman as a dwarf, is consistently funny and sometimes sweetly affecting in his dual role as the downtrodden Squeezit and the pleasure-driven Renee.

Considering its unrelenting oddity and irreverent obscenity, Forbidden Zone is not for all tastes. I consider myself a fan of the film, and even I was taken aback by some of the sicko humor on this particular re-watch. However, if your favorite Baltimore filmmaker is John Waters and not Barry Levinson, or you prefer James Gunn's Troma output to his recent Marvel blockbuster, or you think that Peter Jackson hasn't made a great movie since Meet the Feebles, well then, friend, Forbidden Zone is certainly for you. 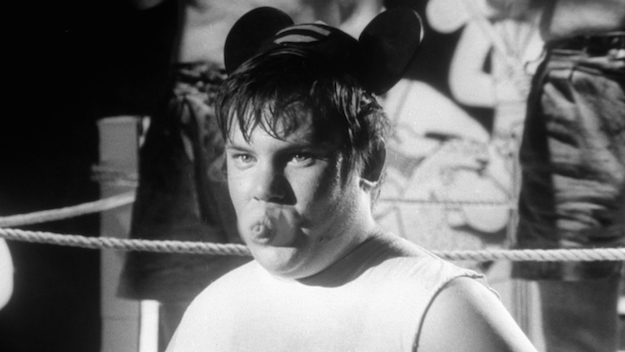 The Blu-ray
The Forbidden Zone Ultimate Edition consists of the film and bonus features on one region A/B/C-coded BD, and the film's soundtrack album (running around 40 minutes) on one CD.

There is a booklet mentioned on the packaging that was mistakenly left out of the first batch of releases. If you receive a copy without the booklet, MVD has set up this email to contact so you can get your booklet free-of-charge: [email protected]

The Video:
Forbidden Zone is presented in both its original black-and-white version and the 2008 color-tinted version. Both AVC-encoded 1080p 1.78:1 presentations are surprisingly clean and clear. I watched half of the film on a smaller monitor, and it looked spotless to me. When I put it on a bigger screen, I noticed subtle dirt and scratches, but for a low-budget cult film from 35 years, it looks quite spiffy. The film grain is attractive without overwhelming the image and the blacks are inky with good shadow detail. The color-tinted version looks kind of like old hand-colored postcards: 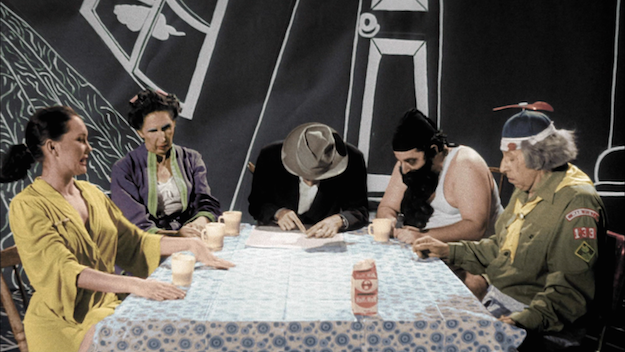 This is intentional, but I still don't prefer it to the original monochrome. I will admit, though, it does certainly make for some striking images: 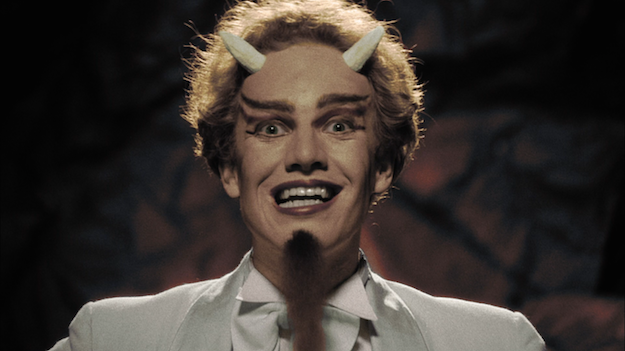 The choice, dear viewer, is yours.

The Audio:
Both versions of the film come with multiple audio options -- none of them HD lossless. The black-and-white version features both a DTS 5.1 surround remix that is pretty center-focused, although it gives Danny Elfman's music room to breathe, and the original DTS 1.0 mono mix, which is also perfectly effective. On the basis of the music alone, however, I'd go for the remix. The color version also features the 5.1 surround mix, but it also splits the difference with a DTS 2.0 stereo remix. No subtitle options or closed captioning.

(HD, 3:46) - A spazzy little homemade intro, in which Elfman welcomes viewers and segues into a montage of concept drawings for the impending Forbidden Zone 2. 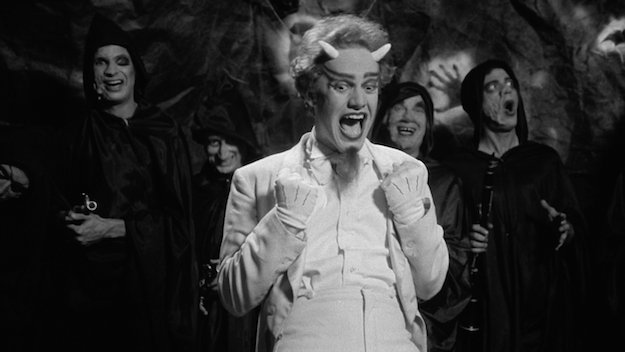