Space Dandy is an over-the-top action-sci-fi comedy series from acclaimed anime director Shinichirō Watanabe (Cowboy Bebop, Samurai Champloo, Kids on the Slope) and Shingo Natsume. The series focuses upon a Space Dandy (as the title of the series suggests he is someone egotistical and is obsessive over appearances) as he explores the universe with intergalactic missions to find strange aliens who have never been identified. This plot is ultimately about collecting enough money from the sale of aliens to go out to eat.

Dandy goes around the universe with his best pal robot named QT (who uses an outdated CPU so he isn't able to compute the most current information) and a common alien creature by the name of Meow who looks like a alien version of a cat. Together, the three of them go about getting paid for their alien discoveries (if they don't die by the end of an episode).  During several adventures by Dandy and co. the entire team dies in an explosion or another oddly random conclusion. When they don't simply explode they spend their earnings to go out searching for a meal at a Hooters like restaurant named BooBies, which is the only place regularly visited and where Dandy likes to eat.  In essence that's the entirety of the show's establishment. (Unfortunately.)

For some measure of antagonists to the series protagonists, Space Dandy introduces an Admiral Perry who has a strange appearance and is in charge of a intergalactic war. He enlists his gorilla-like alien named Dr. Gel to find and take out Dandy.  Dr. Gel's assistant is a alien who looks a lot like a cucumber and goes by the name of Bea.

Watanabe (who serves as the general director of the series) has clearly conceived of the show as being a form of Space Opera spoof which is meant to poke fun at a host of other popular anime creations over the past several decades. Some of the comedy is supposed to come from this and some of it seems to actually be intended as hilarious simply from the characters and universe of this show. Unfortunately, a lot of the things Space Dandy is spoofing are already annoying in badly done anime productions. Adding them into this show doesn't make this series any better. The humor isn't really all that, well, humorous. In fact... all of these aspects help to make Space Dandy feel like a rare misfire from director Watanabe. It is worth noting that Watanabe as general director is overseeing the entire series but other directors (many of whom are acclaimed in the in industry) were involved on directing specific one-off episodes.

If there are some more positive aspects of the production they fall into supporting elements of the series and not the storytelling itself. While the scriptwriting and character development is rather lackluster at times, the animation is one of the keys to a lot of the wonder of a Watanabe series and this series is no different in that regard. With Space Dandy, there is at least the feeling that many of the bizarre and ambitious sequences of elaborate action-adventure and of intergalactic exploration was done with the same dedication to craft. I wouldn't go as far as to say it's on par Cowboy Bebop but it's clearly the work of the same director. This is at least a silver lining to an underdeveloped story and other disappointing aspects. A lot of the problems I had with Space Dandy began with the writing. The characters feel flat and the comedy mostly disappoints. For this reason, Space Dandy is not as strong of a work for Watanabe.

Alas, animation alone does not make this series succeed at what it set out to accomplish. It is also worth noting that even though the anime artwork is quite sufficient it's also a bit sad to continue to see anime moving away from the hand drawn production approach. (Update: A reader has pointed out that many aspects were "hand-drawn" but by drawing into a tablet pad where animation is then worked with on computers.) This is Watanabe's most digital-looking production to date and even with stunning production design attributes one almost can't help but yearn for the traditional cel-based style used to perfection on Cowboy Bebop.

The music composed by the "Space Dandy Band" is also a far cry from other Watanabe works, which largely relied upon the dynamic genius of Yoko Kanno (the greatest composer in all of anime music). Nor is there any of the cutting-edge DJ and hip-hop music as found in Samurai Champloo. While it's also fine for filmmakers to try new things artistically (and Space Dandy succeeds at being an attempt at something "different" for Watanabe if nothing else) it's also a drawback that the music for this series shares a lot more in common with the majority of the productions coming out yearly.

While Kanno ended up sharing a few tracks for the series, it certainly marks a huge difference compared to the several soundtracks she has composed for previous works from Watanabe. Some might find the music comparison unnecessary but it is worth noting that some of the greatest collaborations in all of the medium have happened between director and composer. Watanabe and Kanno are the pinnacle of such collaborative approaches in the anime world. Space Dandy is even musically amiss by not finding all of the right musical notes.

Watanabe is still an important director with a good knack of cinematic energy but Space Dandy may end up a divisive creation that won't appeal to all of the fans who adore his previous work. Space Dandy is quite unlike anything else done before by its director and audiences expecting the emotional gravitas found on Bebop, the adventure of Champloo, or the jazzy slice-of-life approach of Kids on the Slope will be surprised to find a comedy series that will more likely bring to mind Robot Chicken or Aqua Teen Hunger Force (with better production values).

Space Dandy: Season 1 is presented on Blu-ray across two discs and has been encoded in 1080p MPEG-4 AVC with the original television broadcast aspect ratio of 1.78:1 widescreen. This is a native high-definition series which showcases the animation in all of its glory. The artwork and animation detail is strong throughout and the series color, depth, and clarity are well presented.  This is a good presentation of the show. There is occasional minor banding but it is otherwise impressive. Funimation has done a solid job on this release.

There are two audio options on this release: English 5.1 Dolby TrueHD and Japanese 2.0 stereo Dolby TrueHD. English subtitles are provided. The audio track seems to default to a negative offset, which means many viewers might want to check their receivers to see if they need to crank the volume up more than usual for viewing Space Dandy. The Japanese language track does seem particularly soft on occasion. The dialogue is well reproduced though and is easy enough to understand. The music and sound effects have been reasonably integrated into the sound mixes. Space Dandy has a slightly-above average surround mix and a average stereo mix. Funimation's presentation is quite modest but is generally solid and should please most fans.

The Funimation.com Exclusive Limited Edition includes exclusive packaging and pack-in items as can be seen in the below image: 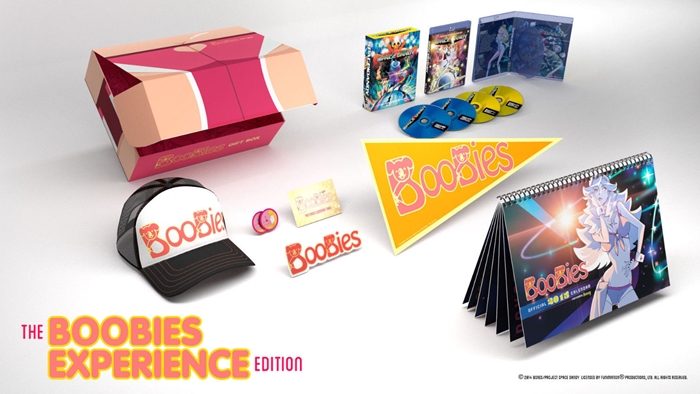 Dandy Guy in Space: Part 1(HD, 35 min.) is the biggest supplemental inclusion. It is a interview based behind-the-scenes documentary featuring the English dub cast and ADR directors talking about the characters, the show, and the process of working on the English language version of Space Dandy. This behind the scenes look also features clips from episodes of Space Dandy.

Space Dandy is the weakest series to date from acclaimed director Watanabe. It has a weak line-up of characters which mainly seem to fill standard anime archetype roles. This comedic series actually shares more in common with successful Cartoon Network Adult Swim programs than it does previous Watanabe series like Cowboy Bebop and Samurai Champloo, though the animation remains a stellar attribute.

Funimation has done a solid job with regards to picture and sound quality. Fans of the series should consider it a worthy investment to own the show. However, newcomers might find renting the series to be sufficient as it's possible even massive fans of previous Watanabe productions may find Space Dandy decidedly disappointing.