My Little Pony Friendship Is Magic: Adventures Of The Cutie Mark Crusaders 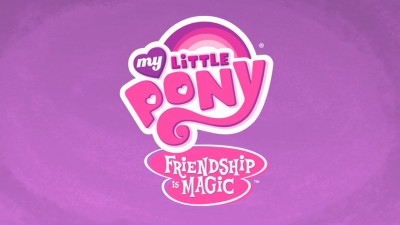 The Show
Few kids cartoons stick as closely to their DVD best-of themes as My Little Pony. The sets may not bat 1.000, but they tend to not stray far from the topic at hand, and the streak continues with "My Little Pony: Friendship is Magic - The Adventures of the Cutie Mark Crusaders." Four of the five episodes included in this set star the titular Crusaders, a trio of younger ponies made up of Scootaloo (who idolizes high-flying pegasus Rainbow Dash), Sweetie Belle (younger sister of fashionista unicorn Rarity) and Apple Bloom (sibling to farmer pony Applejack.) Even more adorable versions of the lead ponies, these younger characters have yet to earn their "cutie marks," the icon on a pony's hip that shows their special talent, and getting them is an all-consuming obsession for them. It's hard to miss this as something of a stand-in for puberty (considering all the talk of how it will come with time and everyone gets it at a different point) adding yet another lesson for the show's young viewers.

That's par for the course when it comes to Cutie Mark Crusaders episodes, as they are all about the three youngsters learning about life and themselves. However, the first episode here finds them learning more about the Mane Six, as the kids' quest for their own cutie marks sees them learn about the origins of each of the core ponies' icons. These are particularly interesting because how how the younger ponies are depicted in order to de-age them (like the change in Pinkie Pie's hair.) Though the kiddies are the focus, the main characters are not ignored, with "Pinkie's Pride" leaving out the Crusaders entirely, as Pinkie questions her role and purpose when another party pony arrives on the scene (voiced by "Weird Al" Yankovic, accordion and all.) 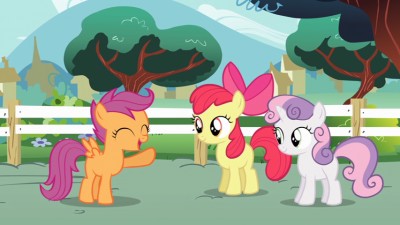 Though the origin stories of "The Cutie Mark Chronicles" are a highlight of this set, the other Crusader adventures are enjoyable as well, with "The Cutie Pox" offering a lot of fun, as the crusaders look to Zecora the zebra for help getting their marks. The results of the tonic she provides are unexpected and quite fun, and watching the crusaders deal with them sent my daughter into hysterics. Though their episodes tend to involve a moral, for the most part the lessons don't interfere with any enjoyment of the episode. The learning is always fun.

Though the show is obviously intended for kids, watching it with my daughter is fun, because we find the same silly things funny, and often I'll chuckle at a goofy face a character makes or a funny bit of business going on, either up-front or in the background. The randomness of a character like Pinkie Pie allows just about anything to happen, which avoids the same-old kids cartoons. However it's the absolute effort made to appeal to both the kids and adults watching that makes the show so uniquely cross-generational. Watching "The Cutie Pox," during a scene set in a bowling alley, a character in a purple jumpsuit with a hair net in the foreground immediately stands out. Is that supposed to be Jesus from The Big Lebowski? When ponies representing Walter, Donny and the Dude are spotted a moment later, it's pretty clear. This is meant to be entertaining to me too. 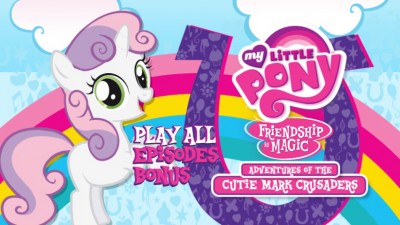 The DVD
Packaged in a white single-width keepcase, which is inside a slipcover that repeats the cover art, this DVD offers up five episodes. The disc has a static, anamorphic widescreen menu, with options to play all the episodes, select shows and check out the extras. There are no audio options and no subtitles, though closed captioning is included.

The Quality
Watching these episodes on my big screen, a thought bubbled up: what would these episodes look like on Blu-ray? That's because these anamorphic widescreen transfers look terrific, just bright and beautiful, with no obvious issues as far as compression or other such matters are concerned. The colors are just gorgeously well-saturated and everything comes off wonderfully.

Recent MLP DVDs have begin to include Dolby Digital 5.1 tracks, and the mixes here sound great, especially during a song like "Hearts as Strong as Horses." Overall, the audio is very nice, with the side and rear speakers stepping up to enhance the music, while also delivering occasional sound effects. There's not much dynamic about the sound, but everything is clear and well-defined.

The Extras
The only bonus content on the disc takes the form of a single sing-along segment for the song "Super Party Pony" from the episode "Pinkie Pride." There are on-screen karaoke-like lyrics to use in singing along with the cast. It's probably the best choice that could be made from the songs in these episodes, especially when the song features Yankovic.

Open the disc in a computer and there are a few files to check out, including a printable coloring sheet (with an obnoxious ad across the bottom) and a set of seven computer wallpapers, which feature the ponies' cutie marks (but no art of the actual characters.) These downloadables held definite appeal for my daughter. 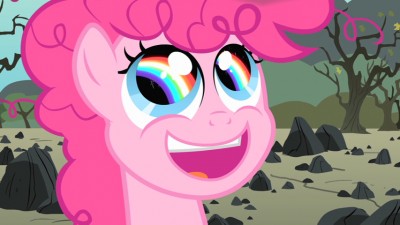 The Bottom Line
If you like the pony stars of My Little Pony: Friendship is Magic, it's not likely that you wouldn't enjoy the Cutie Mark Crusaders, as they are the Xhibit version of MLP (I put cute in your cute, dawg.) As such, this is a quality little collection, with some very enjoyable episodes, including the Weird Al-guesting "Pinkie Pride." As usual, the presentation is excellent, while the extras are minor, but worth checking out. Because of the episode selection, this one is a bit more of a draw than the usual MLP DVD.