They Call Me MISTER Tibbs!

Kino // PG // May 12, 2015
List Price: $29.95 [Buy now and save at Amazon]
Review by Stuart Galbraith IV | posted May 5, 2015 | E-mail the Author
First things first: In the Heat of the Night is not a great movie. Undeniably, it was as timely as hell, with its story of a black detective from Philly, Virgil Tibbs (Sidney Poitier), involved in a murder investigation in racist Mississippi, butting heads with hotheaded cracker police chief Bill Gillespie (Rod Steiger, very hammy). Otherwise, it was just above average, hardly in the same league as other 1967 releases like Bonnie and Clyde; Far from the Madding Crowd; The Good, the Bad, and the Ugly; The Graduate; In Cold Blood; A Man Vanishes; Play Time; Quatermass and the Pit; Le Samouri; Titicut Follies; Two for the Road; War and Peace; and The Young Girls of Rochefort.

Even Poitier's other movies that year, Guess Who's Coming to Dinner and To Sir, With Love, are better.

In the Heat of the Night's nonetheless prompted, eventually, two sequels: They Call Me MISTER Tibbs! (1970) and The Organization (1972). Each is less interesting than the first one, but the gulf among them isn't all that vast. They Call Me MISTER TIBBS! is a routine but not-bad cop thriller, damaged mostly by Gordon Douglas's lazy, unimaginative direction and an equally lazy and unimaginative subplot concerning Tibbs's personal life.

Considering the huge box-office and acclaim of all three of Poitier's 1967 releases, it's strange to see him slumming through such a routine, blandly-directed movie two-and-a-half years later. During the interim, Poitier starred in the well-regarded but spottily released (though modestly successful) For Love of Ivy (1968) and the now obscure, forgotten The Lost Man (1969), a remake of the British classic Odd Man Out (1947). It's likely Poitier had to work a lot harder finding the right vehicles than white movie stars with similar track records. 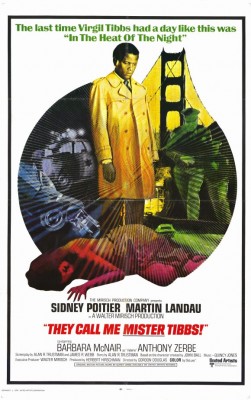 Inexplicably relocated to San Francisco (a year before Dirty Harry filmed there), Detective Lt. Virgil Tibbs (Poitier) investigates the brutal murder of a prostitute. A neighbor, Mealie (Juano Hernandez), discovered the body, but landlord Rice Weedon (Anthony Zerbe), trafficking drugs and procuring hookers out of the building, impedes the investigation.

Tips initially lead Tibbs to suspect Weedon's associate, Woody Garfield (Ed Asner, uncharacteristically fitted with a thick wig), leading to a high-speed pursuit across the city. (His wife is played by Fiddler on the Roof's Norma Crane.) But evidence begins to stack up against community activist Rev. Logan Sharpe (Martin Landau), whom Tibbs admires, and who admits having had sexual relations with the woman.

Meanwhile, back home, Tibbs and wife Valerie (Barbara McNair) are having trouble with their prepubescent boy, Andy (George Spell), with Valerie blaming her husband's long hours for Andy's problems.

They Call Me MISTER Tibbs! (its title taken from the first movie's signature line, though it's said not once here) is perfectly ordinary, though Poitier's performance is very good, if reliant on actorly tics here and there.

Originally rated GP (the early, PG equivalent) only to be reclassified R in a 1996 re-rating, the picture is far tamer than Dirty Harry, with some laughable attempts to be adult and slightly lurid. Some unintentionally funny dialogue at the crime scene has various CSI-types poring over the evidence: "We got sperm on the carpet," says one. "Scrape it!" orders Tibbs. "We got more sperm here on the sofa," reports another. "Bag it!" says Tibbs.

The film looks less like a theatrical feature than a higher-end TV-movie of the week. No wonder: Herbert Hirschman (Dr. Kildare, Perry Mason) produced it; Gerald Perry Finnerman (Star Trek, Kojak) shot it, and the picture is populated with actors primarily associated with television at that time: Landau and Asner, with Ted Gehring and Garry Walberg as cops, etc.

Director Gordon Douglas all but defined the journeyman director. Starting out at Hal Roach Studios' "Our Gang" comedies, Douglas gradually moved into features. He's best remembered for Them! (1954), an excellent ‘50s science fiction film well directed by Douglas, and a trio of low-budget but interesting Westerns starring Clint Walker: Fort Dobbs (1958), Yellowstone Kelly (1959), and Gold of the Seven Saints (1961). Big movie stars like Frank Sinatra and Elvis Presley liked working with Douglas not because he was a great auteur, but rather because he'd let them call the shots, deferring to their star status.

They Call Me MISTER Tibbs! (as the title card reads) is flatly directed throughout, with the oddball addition of Douglas often cutting between tight close-ups of the actors talking directly into the camera lens. This was done effectively in some early ‘50s Dragnet episodes but, in this case, only draws attention to itself.

The screenwriters seemed determine to show that Tibbs's home life was as bland and ordinary as any white cop's family, and perhaps to toss in a little of To Sir, with Love's generational battle of the wills. The business with Tibbs and his rebellious son is fascinatingly dated: When his son flatly refuses to clean his room, Tibbs hits the boy across the face with an open hand. Andy stands his ground and Tibbs wallops him again. And again, until the boy forms an uncomfortably realistic shell-shocked, teary-eyed expression on his face. He also forces the boy to smoke cigars and drink whiskey, to man-up, or something. This might have seemed like sensible parenting in 1970, but today it'd likely get Tibbs arrested.

Licensed from MGM, Kino Lorber's Blu-ray of They Call Me MISTER Tibbs! looks very good in its 1.85:1 widescreen, 1080p transfer. Some of the titles and optical effects show their age, but otherwise it's a pristine presentation. The DTS-HD Master Audio 2.0 mono is reasonably robust; no subtitles.

In a welcome bit of imagination, the disc includes trailers for all three Tibbs movies.

Neither bad nor good, They Call Me MISTER Tibbs! is okay escapist, if dated, detective fare. Rent It.