Twilight Time // Unrated // February 10, 2015 // Region 0
List Price: $29.95 [Buy now and save at Screenarchives]
Review by Stuart Galbraith IV | posted March 10, 2015 | E-mail the Author
Director Roger Corman's The St. Valentine's Day Massacre (1967) is a fascinating anomaly. As he points out in the interview included on Twilight Time's new Blu-ray disc, it was 20th Century-Fox's least expensive production that year yet, ironically, the most expensive movie by far he had ever directed.* Corman had been making ‘em cheap and fast for more than a dozen years, mostly for American International Pictures (AIP) and Allied Artists, on budgets of $400,000 or (often considerably) less. Massacre was his only Big Hollywood Studio film, made on a $2.5 million budget, though Corman only needed $2.175 to complete it. Most of Fox's pictures that year were extraordinarily wasteful: Doctor Doolittle ($17 million), Hombre ($5.8 million), Caprice ($4.6 million), to name three. Compared to those, Massacre was a real bargain.

It's been widely assumed Corman hated working for a big company like Fox, and that was the reason he, like Italian contemporary Mario Bava, went back to directing low-budget features, but the interview belies this. He seems to have found the experience interesting and fun, though perhaps one he didn't care to repeat. It's also been conventional wisdom that Massacre itself isn't very good, but in fact there's quite a lot to recommend it, despite casting and acting problems by two leads which Corman couldn't overcome.

Twilight Time's Blu-ray of The St. Valentine's Day Massacre is basically flawless and the extra features, though limited, are also good. 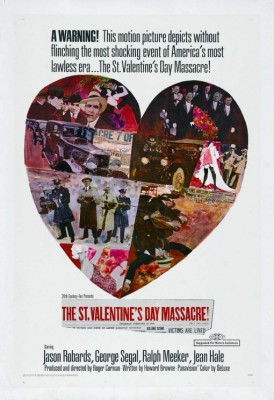 The movie, of course, depicts the events leading up to and immediately following the February 14, 1929 mass murder and attempted assassination of "Bugs" Moran (Ralph Meeker) on orders from rival gangster Al Capone (Jason Robards). It was an adaptation of screenwriter Howard (not Harold) Browne's novel Seven Against the Wall and, though uncredited, at least partially a remake of the Playhouse 90 television drama of the same name. In Corman's film, actors Frank Silvera, Milton Frome, and Celia Lovsky reprise roles they had played in the Franklin J. Schaffner-directed TV version.

The movie is modeled after the semi-documentary noirs of the late-1940s and, stretching back further, The Roaring Twenties (1938) and The Public Enemy (1931).** Mainly though, it attempts a historically accurate dramatic recreation of events. Compared to other mid-'60s movies set during the late-‘20s (such as the two Jean Harlow biopics from this time), The St. Valentine's Day Massacre largely succeeds. It still resembles a ‘60s era, big studio period film: it's way over-lit (common among Fox's ‘60s movies), and Production Code restrictions precluded more realistic, graphic violence that the film seems to call for but, authenticity-wise, it's still way above average.

Corman's direction results in an extremely fast-paced, highly suspenseful film of virtually non-stop violence. It seems much shorter than its 100-minute running time. Partly this is due to a very unusual, fascinating device in the script. The movie is narrated throughout (by Paul Frees, uncredited), mainly to introduce the myriad real-life gangsters: their backgrounds and their positions within the Capone or Moran mobs. Additionally, as they're introduced, narration reveals how and when each of them died. ("So-and-so would be murdered in 1943," "So-and-so would die of natural causes in 1957," etc.) The exceptions to this are Capone, Moran (whose fates are saved for the end), and those murdered in the Valentine's Day Massacre. Just prior to the massacre, each murder victim is reintroduced with narration beginning with, "On the last morning of his life, So-and-so was…"

One would think all these "spoilers" would obliterate any and all suspense, but in fact the very opposite is true. By informing the audience ahead of time which characters face imminent death, the irony of their last actions (mulling over the purchase of a new car, for instance) is underscored and made plain, and the audience can't help but feel a modicum of sympathy for these mostly unsympathetic villains.

Corman wanted Orson Welles for Capone, an inspired choice, but the studio nixed that idea. Jason Robards, whom Corman had intended to play "Bugs" Moran, took over the role. Unfortunately, Robards resembles Capone not in the slightest, and is unpardonably hammy. There's no shading; he's just a screamer. Further, the second lead, George Segal as Peter Gusenberg, frontline enforcer for the Moran gang is, arguably, even worse, doing something like a Jimmy Cagney impersonation throughout. He even smashes a sandwich in girlfriend Myrtle's (Jean Hale) face as Cagney had done with a grapefruit to Mae Clarke in The Public Enemy.

Robards and Segal are that rare breed of actor who seem to give either an extremely good or positively awful performances with nothing in between. Both are flamboyant and hammy while completely lacking in charisma and nuance. All of the other actors around them are far subtler or at least workmanlike. Ralph Meeker, for instance, as "Bugs" Moran, has too little screentime but creates an understated, believable and multi-faceted character. Several of the supporting actors, particularly Frank Silvera, as Nick Sorello, an eager-to-please Italian immigrant (chameleon actor Silvera was actually black) fully aware that he's being used as a pawn in the gang wars, are excellent.

Mostly the movie, nearly an ensemble piece, is dominated by character types associated with gangster and crime shows - Joseph Campanella, Richard "Dick" Bakalyan (who died last month), Harold J. Stone, Paul Richards, Joe Turkel, Tom Reese, etc. - but Corman, forever loyal to his stock company of actors on the low-budget films, found roles for virtually all his favorite actors. Dick Miller and Jonathan Haze play the hit men disguised as cops, Bruce Dern has a good if small role as a reluctant driver, Betsy-Jones Moreland has a good bit as a reporter flirting with Capone poolside in Miami. Leo Gordon turns up as a gangster (natch), Joan Shawlee (from The Wild Angels) as a prostitute, and Barboura Morris as a citizen who stumbles upon murder victims in the first scene. With Jack Nicholson's acting career hitting rock bottom at this point, Corman gave him a tiny, unbilled part as another of the hit men. Though he has all of one line in the picture, Nicholson was eternally grateful to Corman for thinking of him when he needed Corman's help most.

Another of the film's assets is its subtle but distinctive theme that, at the height of the Chicago gangland wars, everyone but everyone was hustling for a piece of the action. It wasn't a question of illegality or immorality, but rather: What can I get out of this? Shawlee's hooker steals money from her john; Dern's mechanic doesn't want to get involved but he's three months behind in his rent and he's got seven kids to feed; Milton's Frome's accountant isn't proud of working for Moran, but he's got a sick wife who needs an operation; Hale's gold-digger wants a $3,000 mink coat. Mickey Deems plays the interesting role of Reinhold Schwimmer, a real-life optician simply looking for vicarious thrills by hanging out with gangster "pals."

Corman kept costs down shooting most of the film on the Fox backlot and on standing sets, including the von Trapp main hall from The Sound of Music, redressed as Al Capone's house! (Wikipedia claims most of the film was shot on the Desilu lot, i.e., the former RKO lot in Culver City. That lot may have been rented for some scenes, but most of it appears to be Fox.) The unfinished tops of backlot sets, regrettably visible in at least one shot, were expanded through the use of excellent matte paintings by an uncredited artist, probably Albert Whitlock (they're in his style).

Filmed in Panavision, The St. Valentine's Day Massacre looks absolutely great on Blu-ray, sporting excellent detail and pleasing but not overwhelming film grain in this 1080p transfer. The 1.0 DTS-HD Master Audio mono (with no other language options but supported by optional English SDH subtitles) is likewise strong. This is a limited edition, restricted to 3,000 units.

Supplements include an isolated score track for Lionel Newman's and (uncredited) Fred Steiner's music; scattered (and notably un-chronological) excerpts from Fox Movietone newsreels about Capone, and a trailer. Also included is a brief (and rather poorly shot) interview with Corman, where he offers some interesting tidbits about the project while, as always, grinning with infectious total delight. Julie Kirgo's liner notes puts it all into perspective.

* The spirit of Corman's statement is correct, but technically untrue. Corman's 1990 film, Frankenstein Unbound, cost much more, and Fox released several films in 1967 that cost less than Massacre, including The Incident ($1 million), The Day the Fish Came Out ($875,000) and Bedazzled ($775,000).

** Reader Sergei Hasenecz writes, "Let's not forget the vogue for 'true life' gangster movies, often low budget, which had been going on for some time, in part inspired by the success of TV's The Untouchables (1959 - 1963): Al Capone (1959), The Rise and Fall of Legs Diamond (1960), Murder, Inc. (1960), and Portrait of a Mobster (1961, about Dutch Schultz), among others, and Corman's own Machine Gun Kelly (1958). Then, of course, there was Bonnie and Clyde (1967), which revitalized the genre." True enough, but I'd argue that The St. Valentine's Day Massacre is more a counterpoint to The Untouchables and its offspring, owing more to these earlier influences, which in turn influenced Untouchables as well.