Kings of the Sun

Kino // Unrated // May 26, 2015
List Price: $29.95 [Buy now and save at Amazon]
Review by Stuart Galbraith IV | posted May 21, 2015 | E-mail the Author
In the wash of myriad epics set in Ancient Egypt, Rome, and Medieval times, Kings of the Sun (1963), about the conquest of Chichen Itza and the eventual clash of Mayan with early Native Americans is like a breath of fresh air. The movie, starring Yul Brynner and George Chakiris, with energetic direction by J. Lee Thompson, is consistently intriguing, intelligent, and evocative, though it doesn't entirely live up to its great promise. Executive producer Walter Mirisch wasn't happy with the way the film turned out, reflecting that it was then what today would be called "high concept," a project built around a basic concept and populated by stars and other personnel under multi-picture contracts looking for the right vehicle to showcase their talents. But Kings of the Sun is nothing to be ashamed of. Most of it is very good and there's certainly nothing quite like it, both admirable qualities.

Kino Lorber's new Blu-ray, released simultaneously with another, much lesser Yul Brynner film from the same period, Invitation to a Gunfighter, is, alas, problematic. Though marginally acceptable overall, it appears that licensor MGM sourced secondary elements, not the original camera negative. The transfer is often soft, wobbly, dirty, and clearly isn't up to the level of what it should look like. There's a big tear in the middle of a crucial scene, and a noticeable splice near the end. 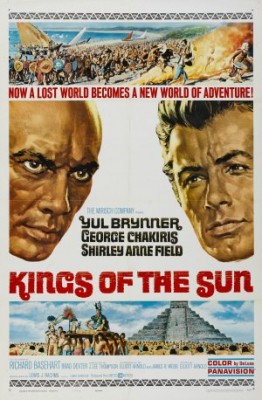 Balam (West Side Story's George Chakiris) inherits the throne of his Mayan kingdom on the Yucatán Peninsula just as rival Hunac Ceel (Leo Gordon) leads a siege of warriors using superior metal-blade swords versus Balam's wooden ones. Using clever yet believable hidden passageways within their massive pyramid, Balam and his advisors, including High Priest Ah Min (Richard Basehart), flee to the coast. There they convince an outlying village chief (Ford Rainey) to order his people to join them on a perilous journey across the Gulf of Mexico, on the promise that Balam will eventually marry the chief's daughter, Ixchel (Shirley Anne Field).

The Mayans make land and gradually reestablish their kingdom along the coast. However, early nomadic Native Americans (who live in teepees) already occupy the region. The chief, Black Eagle (Yul Brynner) leads a reconnaissance mission to investigate these strange but obviously advanced peoples, but he's wounded and captured.

Ah Min pressures Balam to sacrifice Black Eagle to the gods in an ages-old ritual, but the Indian, unfamiliar with such practices, is aghast and refuses to participate willingly. And besides, he's already fallen in love with Ixchel, Balam's betrothed.

The movie, then, touches upon several ideas at once, all while dazzling its audience with epic-scale Mayan culture recreations. Mainly, it explores the notion of capital punishment, sold as a great honor, for the greater good, openly challenged by a non-believer who finds the practice barbaric. It also gently suggests that perhaps two utterly different cultures might somehow find the means to peacefully co-exist, and that that greater good, at the bargain price of simple tolerance, is far preferable to clinging to orthodox religious beliefs that aren't necessarily serving any real-world purpose. ("But," as reader Sergei Hasenecz adds, "an orthodox religious belief does serve a purpose if only because the people holding those beliefs do believe it.") Ah Min certainly believes, fully committing to his faith as few do (see the film) and never once uses his position to manipulate Balam, as often happens with characters in movies such as this. But Balam is already questioning the practice in the movie's opening scene - during a human sacrifice, he alone looks away - and Black Eagle's common-sense objections raise more doubts.

Thompson's direction is very good, facilitating what few directors today seem to understand: the need of the audience to know the spatial relationships, in this case the layout of the Mayan's new kingdom, and its relationship to the sea and to the enemies that would attack it. Similarly, good narration in the film's prologue (spoken by, surprisingly, James Coburn, not yet a star) puts the Mayans into historical context.

Because of all this, the scenes of battle and ritual human sacrifice are tense and exciting, and perhaps because of Brynner's prime physique and Charkiris's background as a dancer, their fight scenes are more brutally and realistically staged than almost all films of the period.

Brynner, too often typecast as standoffish and aloof, here makes a surprising Native American chief, not at all the Michael Ansara-type I was expecting. Brynner's is a character that feels deeply and unashamedly. In his love scenes with Field he's unexpectedly tender and heartfelt, while in other scenes he moves like a panther on the prowl (checking out the strange Mayan invaders). In the fight/battle scenes he's like a man possessed, deliberately wild-eyed to intimidate his enemies. Though it's not a celebrated performance, Brynner is better in this than in some of his more famous but less-demanding roles.

Charkiris and the supporting cast are all fine, if inconsistent. Brynner and Chakaris are exotic-looking to the point of being believable as Mayan and Native American leaders, but Richard Basehart, hampered further by a silly wig, seems out of place, as do Brad Dexter and Leo Gordon, though the latter is appropriately intimidating. Along similar lines, Elmer Bernstein's robust score nonetheless sounds more apt for a Western rather than a Mayan epic.

The entire film was made in Mexico, briefly utilizing the impressive El Castillo at Chichén Itzá, similar to the even more impressive use of the real archeological ruins of Teotihuacán in Tarzan and the Valley of Gold two years later.

Something is seriously wrong with MGM's high-def transfer of Kings of the Sun. Filmed in 2.35:1 Panavision, it appears that the original camera negative was unavailable, for the image shows signs throughout of something like a damaged dupe negative. In addition to a big tear, splices, and negative dirt, the film elements may also have been warped, as a big portion of the right side of the frame of slightly less in focus than the left side. For almost an entire reel a hair, or something, is visible on the right side of the frame, and the color is blah. Even the trailer included on the disc looks sharper and has better color than the feature presentation. That said, it's still a notch above the DVD and reasonably watchable, if very disappointing. The mono audio is okay, and the disc is Region A encoded.

The lone extra is a trailer, a good one that works hard to sell a difficult picture.

The transfer is a real letdown, but Kings of the Sun is a fine movie that deserves to be better known. Recommended.