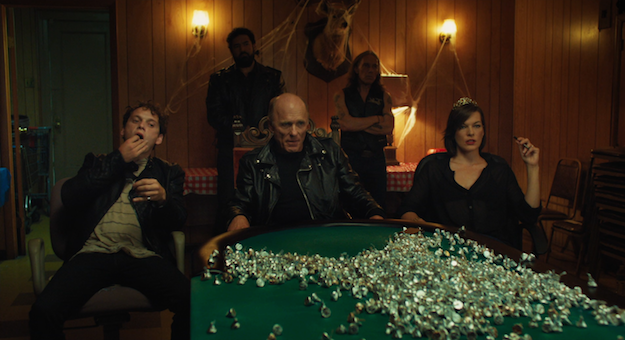 Setting film adaptations of Shakespeare's plays in present-day America is a tricky proposition, not least because of our lack of governing royalty. So much of the drama in Shakespeare's most popular works deals with men and women wrangling for the crown, ambitious schemers offing potential competitors and heirs in the service of bettering their positions, and the justice that must be meted out to eventually bring proper balance to the royal hierarchy. There are plenty of groups within American society that continue to play out these kind of power struggles on different scales -- for example: politicians, corporate businessmen, and racketeers. Of the three, everyone knows that gangsters are the most fun to watch onscreen, and so it's not unusual that crime families frequently stand in for royal families, as in 1990's Men of Respect (an Italian mafia redux of Macbeth) and Baz Luhrmann's 1996 Romeo + Juliet.

So it is also with director Michael Almereyda's Cymbeline, with Ed Harris as the title character, no longer a king but a kingpin. This Cymbeline heads up a drug-dealing biker gang that is tired of paying "tribute" (bribes) to the "Romans" (dirty cops). Cymbeline's new second wife (Milla Jovovich) meanwhile quietly plots to take over, first by trying to marry her son Cloten (Star Trek's Anton Yelchin) to Cymbeline's ray-of-light daughter Imogen (Fifty Shades of Grey's Dakota Johnson).

However, at the start of the film, Imogen has secretly wed her childhood playmate Posthumus (Easy A's Penn Badgely). Dad's not so into that, so he puts his daughter under house arrest and sends Posthumus away. This is one of a handful of plot points that make slightly less sense outside of the context of royalty, because part of why Cymbeline and his wife are so upset in the original play is that Posthumus has wedded the only (known) heir to the throne. But, in the context of a modern-day biker gang... uh... Cymbeline could probably just let Cloten take over the family business if he really wanted to, right?

Anyhow, this is where things start to get tangled. Posthumus accepts an idle bet from a real schemer named Iachimo (Ethan Hawke, clearly enjoying the chance to reteam with Almereyda on another Shakespeare flick after 2000's Hamlet), in which Iachimo claims he can sleep with Imogen and bring back proof that she's not such a great woman. Young, stupid Posthumus doesn't get that he's going to lose either way. Even if Iachimo doesn't manage to seduce Imogen (he doesn't), the wily bastard is going to make it look like he did. Soon, a distraught Posthumus is calling upon one of the bikers, Pisanio (John Leguizamo), to kill Imogen. Pisanio then makes a deal with Imogen to make it look like he did the deed but tells her to run away and pretend to be a boy. (Oh, Shakespeare...) In her travels, Imogen comes across the home of a middle-aged man Belarius (Delroy Lindo) and what he claims are his two sons (Spencer Treat Clark and Harley Ware) but are actually Imogen's brothers that Belarius kidnapped years ago when they were babies.

These webs of deceit and confusion compound and build steadily until they are eventually unravelled one-by-one in an extended sequence of multiple happy endings that is the most bizarre and unsatisfying passage in what has otherwise been a pretty darn good film. Being unfamiliar with the play, my internet research tells me that the goofiness of how that ending plays is largely the fault of Shakespeare. A late work by the Bard, Cymbeline unfolds like a greatest hits compilation of story ideas Shakespeare has played with many times before, leading some critics to conjecture that he was just old and bored or maybe in a self-mocking mood. Almereyda clearly saw some good in the play, though he has cut out more than half of the original text in an attempt to communicate the essence of the story.

One of the moments often recounted from Almereyda's Hamlet is the director's decision to locate the hero's "To be or not to be" soliloquy in a Blockbuster Video as he searches aimlessly through the "action" section. There are some nice visual puns in that vein here, as when Cloten checks Imogen's internet browser search history to find out where she fled, then comments on "the history of my knowledge, touching her flight." Also, when Imogen is first confronted by Belarius and his boys and asked for her (his) name, she sees one of them is wearing a Che Guevara shirt, pauses, and then gives the fake name "Fidel."

Apart from Almereyda's clever and thoughtful staging, the film benefits greatly from its top-flight cast. Despite the title, this story really belongs to Imogen and Posthumus, and Johnson and Badgely play their leads with a mix of charm, intelligence, and youthful foolishness that make them ingratiating to viewers. Harris is perfectly matched for the role of the crusty patriarch. Jovovich is sadly underutilized, although she gets a great showcase moment, in which she sings a sultry rendition of Bob Dylan's "Dark Eyes." Hawke is a laidback villain, which makes him all the more convincing as a victimizer. Yelchin nicely turns his character into a Kroll Show-style Rich Dick, but with a meaner edge. Leguizamo and Lindo hold the screen effortlessly in their relatively small roles, as do the always-great character actor Peter Gerety as a drug-dealing veterinarian, Vondie Curtis Hall in a cop role not unlike the one he played in Romeo + Juliet, and a briefly glimpsed Bill Pullman as the ghost of Posthumus's father.

Because of its biker gang characters, Lionsgate briefly pondered releasing this film as Anarchy, in reference to a certain popular television show. I, for one, am glad that didn't end up happening. After all, some shoot-outs aside, this isn't a gritty crime drama. It's an art film made from a fairy tale essentially. It deserves a wider, younger audience than it's probably going to end up with, just because it's strange and fun, but a marketing bait-and-switch isn't going to pull that off. Hopefully, this flick will build some good word-of-mouth and maybe we'll get to see more of those Shakespeare adaptations Almereyda wants to do. 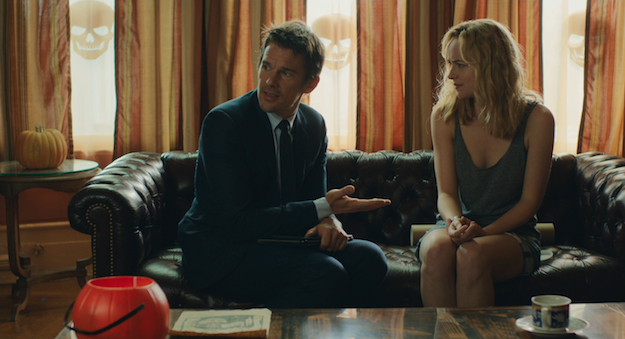 The Blu-ray
The Cymbeline disc comes packaged with a code for Digital HD Ultraviolet streaming.

The Video:
This AVC-encoded 1080p 1.85:1 presentation is excellent. The autumnal cinematography by frequent David Gordon Green collaborator Tim Orr just translates beautifully to the home screen with rich colors and deep blacks. The fine detail is nice and crisp, and I only spotted one shot with any noticeable digital noise. Looks great.

The Audio:
The DTS-HD MA 5.1 surround audio mix is solid. It's neither dense with sound design nor room-shakingly powerful, but it offers a nice ambience and the dialogue is always intelligible. Here's all you really need to know: a pivotal late-film shoot-out occurs offscreen and slightly muted, which speaks both to the budget and the aesthetic of this production. This film is more concerned with the character drama than flashy action. The soundtrack fits that approach. If you enjoy reading, the disc offers English SDH, as well as standard English and Spanish subtitles.

- This is Almereyda's first time commenting on one of his films for home video, and it's an energetic and thoughtful dissection of his approach to the material, complimented nicely by Holden's comments about the original work and its reimagining. Separate moments of Ethan Hawke talking to Almereyda about his scenes -- even more energetically and thoughtfully -- are intercut into this main conversation.

Final Thoughts:
I'm not quite sure why this flick has been getting such mixed reviews. Apart from that 7-layer bean dip of resolution that arrives at the end, this holds up as a fresh and exciting Shakespeare update, with plenty of drama and romance, some action, and even an occasional touch of humor. Plus, the cast acts the hell out of the material. On top of that, the Blu-ray looks great, sounds fine, and has a few good bonuses. In other words: Recommended. 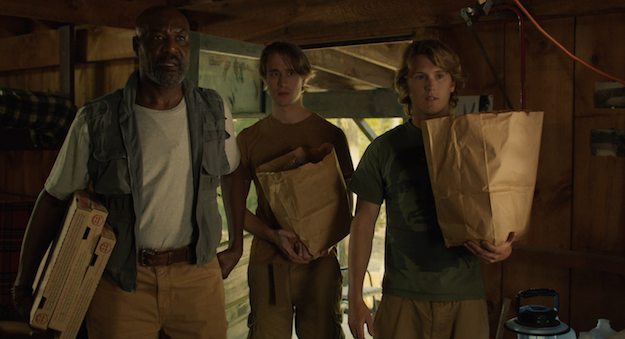