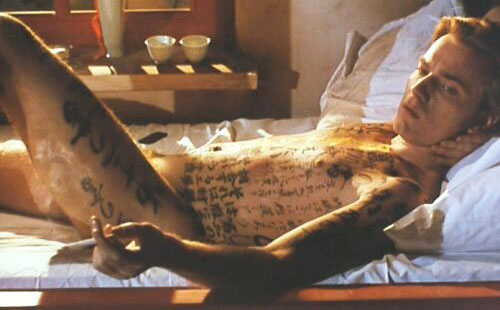 For better or worse, the sensual revenge tale The Pillow Book bears all the hallmarks of its writer/director, British provocateur Peter Greenaway. This beautifully composed yet surface-obsessed ode to memory, passion, and mystical Eastern culture had Ewan McGregor in one of his earlier, riskier roles - as a brilliant calligrapher seduced by a gorgeous Japanese woman (Vivian Wu; The Joy Luck Club) with a most unusual sexual fetish. This 1996 art house hit comes across like a long-ago piece of wackadoodle haute couture - once prized, now embarrassing. Still, the film continues to have its fair share of admirers, who will be well-served by Film Movement's handsome Blu Ray edition.

Like pages in a scrapbook, Greenaway opens The Pillow Book in an undulating, impressionistic collage of overlapping images, texts and musical styles. These flashbacks, flash-forwards (the narrative concludes on New Years Day, 2000) and recreations ultimately gel together to relate the story of a restless young woman named Nagiko (Wu). Preoccupied with memories of the annual ritual her family carried out on her birthday, Naoki would delight in her writer/calligrapher father (Ken Ogata; Mishima) painting poetry on her face while her aunt (Hiswko Yoshida) read passages from The Pillow Book, the classic volume of daily observations from 10th Century Japanese noblewoman Sei Shonagon. On her fifth birthday, however, a glimpse of her father engaging in a sexual favor with his exploitative gay publisher (Yoshi Oida) traumatizes Naoki. The wealthy, casually cruel publisher (and what he represents) becomes the towering symbol of Naoki's conflicted obsessions with power, books, sexuality, language, and fine calligraphy.

As with Greenaway's most notorious film, 1989's The Cook, the Thief, the Wife & Her Lover, there's always a wrinkle, and it's this - Naoki cannot become sexually excited unless fine calligraphic verse is painted on her naked body. It's this frustration that prompts Naoki to bail on a doomed marriage to a brutish, anti-intellectual archery student (the publisher's nephew). Eventually escaping to Hong Kong, Naoki carves out a relatively normal life as a confident fashion designer's assistant and model. She's even found someone who could satisfy her body-painting fetish - Jerome (McGregor), a British expat translator able to speak and write beautifullly in multiple languages. Jerome swings both ways, however - as soon as Naoki finds out he's trading sexual favors with her father's decadent publisher, their relationship turns from playful to controlling. Teaming up with a band of anti-publishing activists, Naoki devises an complex revenge scheme that involves sending the Oida character a succession of nude men (including Jerome), elaborately decorated with her own calligraphy. Written on these living "books" is Naoki's rambling, Pillow Book-inspired saga, the book that she spent years unsuccessfully trying to get published. The freaky gambit succeeds in getting the publisher's attention, in ways that he will soon regret.

Lacking the lavish trappings of The Cook or 1991's Prospero's Books, The Pillow Book nevertheless throbs with Greenaway trademarks like fragmented narratives, copious amounts of female and male nudity, and a healthy dose of magic realism (accomplished with stagy lighting, formal camera setups, and theatrical touches such as the words projected on the walls of Naoki's apartment). Weaknesses in the story, structure and casting make this one not as strong as its reputation suggests, however. Mostly, it comes across like a tourist's inauthentic impressions of "exotic" Asian culture. Simply put, I couldn't believe Naoki's plight for one second. The Chinese Wu delivers an adequate performance as a Japanese woman, despite her vague uneasiness with the English language. McGregor's character enters the story too late for the viewer to invest much in him - like that of Naoki's father, the underwritten part exists as another shallowly conceived figure in the main character's world. The collage of images, words and sounds in the first half is beautiful to look at yet muddled with as many as four stories simultaneously unfolding. Following an interminable, un-sexy seduction scene with Wu and McGregor, the movie pulls itself together with Naoki's revenge scheme - besides McGregor's frequent nudity, this part of the story remained the only elements I could remember from my initial viewing of this film in 2004. Seeing it again confirms its status as a kinky footnote in '90s Indie Cinema - lots of beautifully filmed surfaces, textures, and moods with hardly any depth. 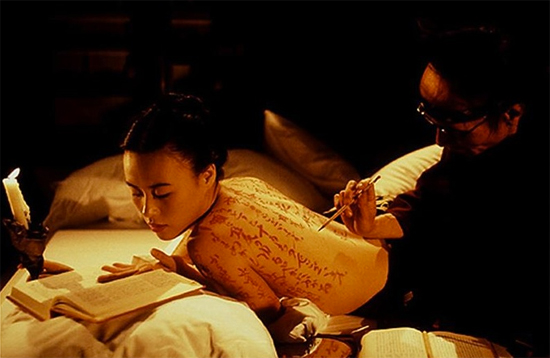 Presented in its original aspect ratio of 1.33:1, Film Movement's The Pillow Book Blu Ray markedly improves the visual fidelity when compared with Sony's 2002 DVD. The color portions of the photography tends to look a little greenish at times, but the DVD's murkiness has been eliminated, resulting in a well-balanced, pleasingly detailed picture. Greenaway's frequent use of split screens, overlapping imagery and picture-in-picture would likely impress more on a giant-sized screen; with my regular-sized A/V setup, it came across as underwhelming. The mastering is nice enough to make this upgrade worthwhile for fans, however.

The mono soundtrack incorporates dialogue in several different languages and a wide variety of music, ranging from Buddhist chants to contemporary French pop, classical and vintage Chinese music. Dialogue is cleanly mixed in with sound effects and scoring, despite the lack of atmosphere in this simple track. Optional subtitles are provided on the non-English dialogue.

The disc includes an Audio Commentary with Greenaway enthusiastically discussing the film's myriad visual influences, his writing process and the production. The non-scene-specific track stops abruptly at the 38-minute mark. Trailers for this and other Film Movement releases can also be found on the disc, while the package includes a nice 12-page booklet with color film stills and an insightful essay from film critic Nicolas Rapold. 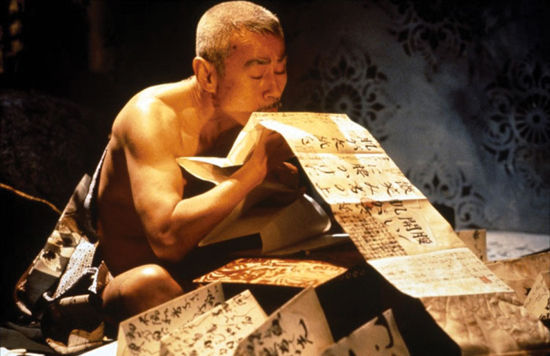