Boys in the Band, The

Arriving on the late-'60s cultural scene like a freshly ripped-off Band-Aid, Mart Crowley's The Boys in the Band dared to show the messy, self-critical lives of gay men told from a brutally honest, inside perspective. William Friedkin's 1970 film pretty much transplanted this stage hit to the screen, its shrill dialogue and uncomfortable clichés kept intact. Kino Lorber's Studio Classics Blu Ray edition brings this important film back into the spotlight in pleasing high definition (arriving in time for Gay Pride Month), while keeping the informative extras from the earlier DVD.

Populated with men who wear flowing scarves, call each other "Mary," and exchange bitchy barbs while name-dropping classic movie divas, Boys can be classified as a relic from another age. That doesn't diminish its raw power, however. Revisiting the film on Blu Ray reveals a cathartic experience, something of a swishy Who's Afraid of Virginia Woolf? - stuck in the '60s, yet tremendously affecting all the same. Much of it comes from the authenticity of Crowley channeling his own experience as an urban gay man into a compelling, psychological thriller story, while Friedkin applied his own dynamic touch, never sacrificing the characters' dignity for cheap exploitation.

Story-wise, Boys uses the framework of a derailed birthday party in a New York City apartment to delve into the psyches of its core cast - a group of male friends in their thirties and forties. Organized by the affable yet tightly wound Michael (Kenneth Nelson), the guest list includes Michael's laid-back boyfriend, Donald (Frederick Combs), their flamboyant decorator pal, Emory (Cliff Gorman) and his cool African-American friend Bernard (Reuben Greene), along with a leisure-suited photographer, Larry (Keith Prentice), and his partner, Hank (Lawrence Luckinbill), a buttoned-up divorcée who recently left his wife. Two surprise guests arrive, as well - first, there's a dim hustler named Cowboy Tex (Robert La Tourneux) whom Emory "bought" as a gift for the birthday man, the sardonic, judgmental Harold (Leonard Frey). The other unexpected guest is Michael's straight-laced old college buddy (who doesn't know he's gay). Alan (Peter White), suffering through a crisis with his wife back in Washington, D.C., has crashed the merrymaking at the worst possible time. When a rainstorm forces the party from the patio to the interior of Michael's place, the host decides to play a cruel game of one-upmanship by demanding that each guest make a phone call confessing their love for the first time, to someone they know. In the aftermath, the ugly, self-loathing psyches of the increasingly drunk party guests become painfully exposed. Worst. Party. Ever.

Having the original stage cast of Boys reprise their roles for the big screen works in this movie's favor, giving it a grit and fire that a slumming movie star would lack. Friedkin's sympathetic direction also works well, opening up the staginess of the single apartment set and giving each character room to have their own indelible moments (a highlight: the introduction of Leonard Frey as the otherworldly Harold). Kenneth Nelson and the sadly obscure Reuben Greene contribute the best performances, although Cliff Gorman's overstated, show-offy Emory remains the sole component that rings false (Friedkin admits as much on this disc's audio commentary). However, Crowley's dialogue still stings with an acid wit ("Life's a goddamn laugh riot."), while Friedkin's choice to emphasize the story's solid thriller aspects makes the movie's darker second half all the more atmospheric.

Boys arrived at the end of the brief 1969-70 nexus when stories with gay and lesbian lead characters were being written, and the major Hollywood studios were willing to put them on screen. By the time Boys opened in March 1970, the Stonewall riots had opened up a dialogue on gay men no longer being content to stay in the shadows. This had the effect of making these miserable characters already seem dated, despite Crowley's play premiering just two years earlier. From today's standpoint, the characters may come across as dated stereotypes, yet Crowley's biting story presciently delves into deep-seated self-esteem issues that dog LGBT youth to this day. 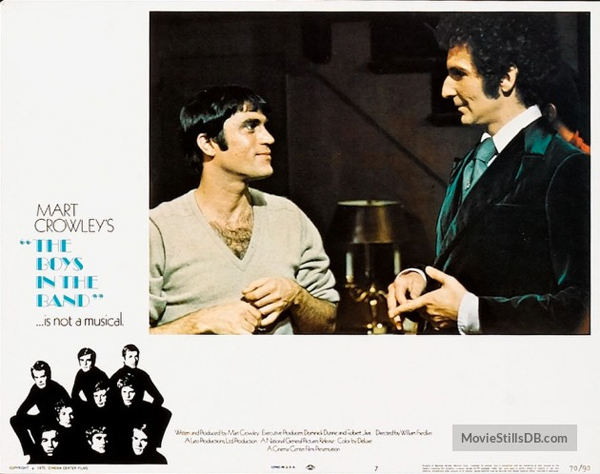 Kino Lorber's Studio Classics Blu Ray edition of The Boys in the Band supplants Paramount's 2008 DVD with a more detailed, slightly brighter and vividly colored picture. The 1.78:1, 1920x1080p widescreen image uses the same source print, which is aged a bit with dust and specks yet agreeably sharp and clean (and strangely contrasty in the film's second half). The film grain is slightly more pronounced than with other major studio films from this period, which fits in well with the gritty subject matter. While owners of the DVD might not want to upgrade (visually, it's just a higher-resolution step up from that disc), new viewers might be pleasantly surprised at how nice-looking this Blu edition appears.

Like the visuals, the DTS Master Audio 2.0 soundtrack is similarly aged but pleasant, with limited dynamics but little in the way of pops and imperfections. The soundtrack tends to get a little distorted during the opening credits, with Harper's Bizarre version of "Anything Goes" playing while the characters are seen doing their daily routines. Other than that, however, this was a good track with relatively clear dialogue and a good integration of the various sound elements. The disc does not provide any alternate audio or subtitle options.

The interesting supplements are all ported over from the DVD - an Audio Commentary with director William Friedkin, plus three Featurettes that explores the stage, film and legacy of The Boys in the Band in a program that totals 44 minutes in length. Friedkin's informative commentary overlaps somewhat with the info he shares in the featurettes, but it's all worthwhile. Some choice anecdotes are shared by the director, playwright Mart Crowley, executive producer Dominick Dunne, actors Lawrence Lunckinbill and Peter White, and playwright Jeffrey Kushner in ACT ONE: The Play, ACT TWO: The Film, and ACT THREE: Forty Years of 'Boys in the Band' (the three parts total about 44 minutes' running time).

The catty, acidic The Boys in the Band still packs a wallop for candidly revealing how gay men saw themselves in the '60s. Kino Lorber's Studio Classics Blu Ray retains the extras from the DVD, giving a full picture of what resonated in Mart Crowley's groundbreaking play and film. "Show me a happy homosexual and I'll show you a gay corpse," indeed. Highly Recommended. 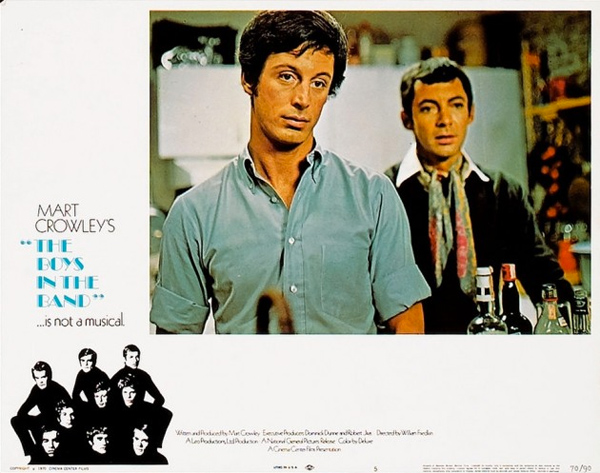