Kino // PG // June 23, 2015
List Price: $29.95 [Buy now and save at Amazon]
Review by Stuart Galbraith IV | posted July 14, 2015 | E-mail the Author
After being greatly disappointed by Bank Shot (1974), an unfunny adaptation of writer Donald E. Westlake's comical caper novel, I didn't hold out much hope for Cops and Robbers (1973), also by Westlake, but lacking Bank Shot's bigger name talent. However, Cops and Robbers is in every way superior, infinitely so. It has everything Bank Shot lacks: rich characters, an outrageous yet believably conceived and very suspenseful heist. The film is full of humor while never resorting to obvious jokes or sight gags; the laughs flow naturally from the story's complications, or through the logical reactions of its characters, who do and say surprising things difficult for the movie audience to anticipate. There's an intriguingly darker, more realistic side to the film that adds to its verisimilitude. And, to top it off, it's one of the most accurate portraits of New York City as it existed in the early-to-mid ‘70s. It's sort of like a cross between Henry Jaglom's Sitting Ducks (1980), and Sidney Lumet's Dog Day Afternoon (1975).

So why isn't Cops and Robbers better known? For one thing leads Cliff Gorman and Joseph Bologna weren't big-name movie stars. Gorman was famous primarily for the stage versions of The Boys in the Band (he's also in the 1970 movie) and Lenny, Bologna for two well-regarded films he co-wrote and co-starred with wife, Renée Taylor, Lovers and Other Strangers and Made for Each Other. Cops and Robbers earned good reviews but did little business.

Kino's new Blu-ray, licensed from MGM, looks good, even including an original United Artists logo at the head and Michel Legrand's exit music at the end, along with a pleasant interview with Bologna tossed in as an extra feature. 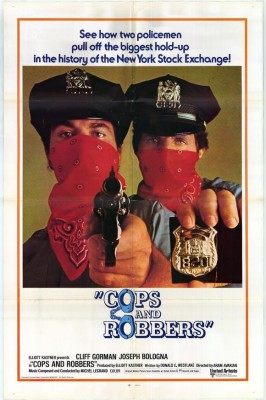 Tom (Gorman) and Joe (Bologna) are New York policemen working out of the 22nd Precinct, earning $215.39 a week. (According to the movie's tagline, that is. Joe is a uniformed cop while Tom is a detective, so one imagines he makes a bit more than that.) Appalled by what today we call "income inequality" and generally unhappy in their dangerous, largely thankless professions, Joe reveals to Tom that he recently robbed a liquor store for the hell of it, prompting Tom to suggest that with their knowledge and experience they could pull off a really big heist.

Tom, wearing an obvious disguise, brazenly visits obscenely wealthy gangster "Patsy O'Neill," actually Pasquale Aniello (John P. Ryan), offering to steal something worth millions on his behalf. Aniello, amused by Tom's audacity, suggests stealing ten million dollars' worth of untraceable bearer bonds from a big Wall Street firm, specifying denominations and other particulars, offering to fence the take that would give Tom and Joe a $2 million commission. The two cops then methodically plot their challenging caper, eventually deciding to hit a leading brokerage firm the day of the Apollo 11 ticker tape parade.

The movie is a wonderful surprise. For starters, despite advertising selling a flat-out comedy (note the ad above, as well as the more widely-distributed posters used for the Blu-ray cover art), Westlake's script is as grim, maybe grimmer, than today's TV cop dramas, lending some real motivation for their wild scheme. In one memorable scene Joe is simultaneously trying to restrain and help a profusely bleeding African-American woman (Frances Foster) who has apparently just murdered her husband. In the ambulance the distraught woman rambles almost incoherently about how the man had assaulted her "baby," though it's unclear if it was a physical or sexual assault. Joe, his blue uniform stained all over with blood, momentarily empathizes with the woman's agony and obvious fate, and becomes distraught himself.

The movie shows pre-gentrified New York as it really was. Certainly this is one of the very few New York movies that never once shows the World Trade Center, the Statue of Liberty, or other major landmarks. (The closest it gets is Belvedere Castle in Central Park.) Instead, the audience spends time, for instance, in Tom's and Joe's backyards in a working class neighborhood (Queens?) adjacent to some freeway, and around lots of nondescript, rundown commercial areas when they're on their beats.

Gorman and Bologna make authentic, entirely believable cops, and equally real longtime pals, giving performances as relaxed and naturalistic as the cast of Bank Shot is tiresomely frenetic. The almost daring script isn't the safe fantasy of Bank Shot where, very obviously, no one's in danger of ever really getting hurt. Without ever speaking of it Tom and Joe hope they can pull off the robbery without violence, but are also clearly prepared to kill hostages and shoot their way out of the brokerage firm if necessary. Further, the fine acting by both projects the self-assuredness of real cops while, contrastingly, allows them to admit just how terrified they are at tense moments.

What's really impressive about the film is how Westlake's script and the actors' work express so much beyond their dialogue. During the heist the pair temporarily hold one of the brokerage's partners, Mr. Eastpoole (Shepperd Strudwick) and his secretary, Miss Wells (Ellen Holly), hostage. Strudwick, a fine actor who seemed to spend his entire career playing the same shady, petulantly smirking characters whenever Wesley Addy wasn't available, is vaguely sinister, outwardly cooperating with Tom and Joe, but looking ready to trigger a secret alarm at any moment. But, later on, he shows enormous yet unstated tenderness toward his secretary, hinting at a personal as well as professional relationship. A later surprise reveals the meaning behind their curious glances.

In addition to the delightful dialogue and amused reactions of actor John P. Ryan when Tom first pitches a big heist to the powerful Mafioso, later on there's an equally fine moment when he visits his boss, an older, Godfather-type figure. The scene begins with the simplest of dialogues, engaging in small-talk about the health of each other's families, but it's a beautifully played scene that really seems dead-on accurate.

Filmed for 1.85:1 cropped widescreen, Cops and Robbers looks pretty good, considering the inherently grainy, less-polished style of lighting and camerawork common to this era. The DTS-HD Master Audio 2.0 mono is also okay for what it is, with Legrand's interesting, offbeat score coming off well. No subtitles or alternate audio options, and the disc is Region A encoded.

Besides a trailer, included is a brand-new 15-minute interview with actor Bologna (Gorman died in 2002), who has nothing but nice things to say about the picture, working with Gorman, Westlake, and editor-turned-wildly-inconsistent-director Aram Avakian.

A bona fide sleeper, Cops and Robbers is a real find. Highly Recommended.