NOTE: The images which accompany this review are taken from promotional materials and do not reflect the quality of the Blu-ray under review. 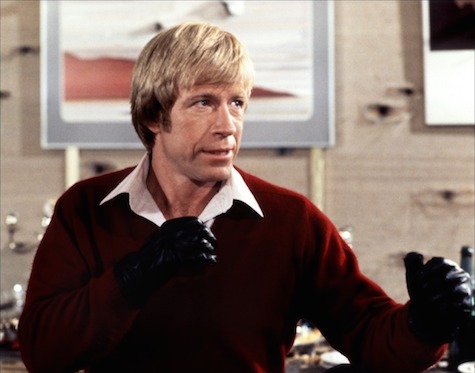 Though it was released in 1981, the Chuck Norris martial arts detective movie An Eye for an Eye feels more like a down-and-dirty '70s exploitation flick than the pumped-up HBO-ready action fare that would help solidify Norris's action legacy in the mid-'80s. Going through Eye director Steve Carver's resume, it looks like he cut his teeth with Roger Corman, directing flicks like Big Bad Mama and Capone, which helps explain this film's no-frills approach. Adding to the drive-in-ready flavor of An Eye For An Eye is the presence of Richard Roundtree and Christopher Lee, both as either criminal masterminds or red herrings. (*SPOILER* It's pretty obvious from the early going, however, that if it's between Shaft or Dracula as the "big bad," it sure as hell ain't gonna be Shaft. *END*)

As the title implies, An Eye for an Eye is a revenge picture. The flick opens with undercover San Francisco cop Sean Kane (a facial hair-free Norris) and his partner Dave (Weekend at Bernie's's Terry Kiser) in the middle of an ambush, one where Dave doesn't make it out alive. Suspecting a mole in his precinct, Sean turns in his badge and gun to his gruff but understanding captain (Roundtree). If Dave's death is not enough reason for Sean to go rogue, Dave's lovely lady, a reporter named Linda Chan (Rosalind Chao), is also taken out by the same heroin syndicate, after she digs up some damning evidence and stashes it. As he begins his own private investigation, Sean turns to Linda's dad James (the brilliant and disarming Mako) -- who also happens to be Sean's martial arts mentor -- to help him track down and beat down the responsible parties. Sean also finds help from Linda's neighbor and coworker Heather (Maggie Cooper), with whom he eventually shares some love vibes.

The plot is straightforward to the max, and the mystery is not mysterious for anyone who is paying attention. (*SPOILER* To reiterate, when Sean sits down to talk with Linda's boss, played by Christopher Lee, he is undeniably malevolent. I mean, come on. This is Saruman. This is Scaramanga, the man with the golden gun. How are we supposed to NOT assume he's the baddie? This obviousness aside, Lee is great in his role and a highlight of the flick certainly. *END*)

That leaves the action and the romance to pick up the slack. While Maggie Cooper is a beautiful woman, there are absolutely no sparks between her and Norris; when they start to get lovey-dovey, the romantic saxophones on the soundtrack seem to kick into overdrive, as if to convince the audience that something hot is happening onscreen. The action, however, does not disappoint. All anyone wants from a Chuck Norris movie is the opportunity to see the hero kick a bunch of dudes, and this movie delivers many times over. At one point, the bad guys manage to tie Norris's hands behind his back, and I immediately thought, "You fools! You need to deal with those feet!" Sure enough, they soon got roundhouses to their chests and faces.

An Eye for an Eye is neither outlandish enough nor well-made enough to qualify as a stand-out exploitation film. To its credit, though, it's not utterly moronic or stupid and it's short on boring moments. Perhaps perversely, I would have liked to have spent more time with the supporting cast rather than the star, but the movie remains pretty satisfying nonetheless. 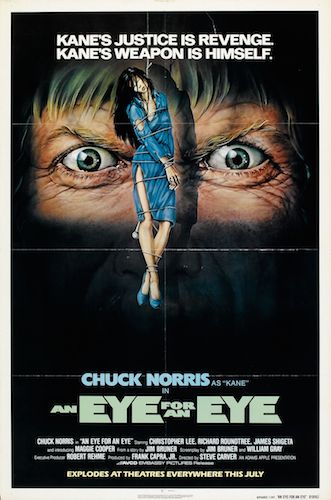 The Video:
For an exploitation movie from over thirty years ago, An Eye for an Eye looks REALLY good. The AVC-encoded 1080p 1.85:1 transfer is quite clean with a strong level of detail throughout. Colors looks accurate, if a little bland (the shooting style is a bit flat and old-TV-ish). Film grain level fluctuates throughout, but this is a pretty minor distraction. No significant digital compression issues either. I dig it!

The Audio:
The DTS-HD MA 2.0 mono audio mix is clean and clear. The dialogue is understandable, and the gunshots are nice and loud. What more could you ask for? (Maybe subtitles? Sorry, there are none.)

- As with Carver's commentary on River of Death, the director is joined by Code Red founder Bill Olsen for a pretty wide-ranging chat that consistently provides interesting and pertinent behind-the-scenes stories. Carver also mentions that he is the one who is responsible for Norris's decision to start wearing facial hair in their next film together, 1983's Lone Wolf McQuade.

Final Thoughts:
Not a great flick, but a fun one. And certainly one that's not an insult to its viewers' intelligence (*cough* Firewalker *cough*). Christopher Lee, Richard Roundtree, and Mako class up the joint with some solid acting, and Chuck Norris kicks fellas real good. End of story. Recommended. 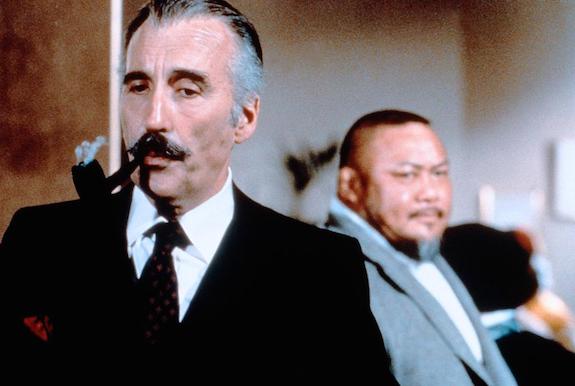