Harry in Your Pocket

Kino // PG // June 23, 2015
List Price: $29.95 [Buy now and save at Amazon]
Review by Stuart Galbraith IV | posted July 11, 2015 | E-mail the Author
An "insider look" at the world of pickpocketing, Harry in Your Pocket (1973) is a very fine film boasting four intriguing characters and their fascinating relationships with one another. It should have been a big success; it's one of those movies that always seem to impress the small audience that stumbles upon it but, unfairly, it's barely remembered today. It was shot in 1972 but its release may have been delayed for some reason. It didn't open until the fall of 1973, just prior to the similar The Sting, which was a huge hit and eventually won the Best Picture Oscar for that year. The Sting is a slicker, bigger-budgeted production and far more the crowd-pleaser. Harry in Your Pocket, by contrast, was made on a fairly tight budget and is more realistic, adult, and even grim. It's possible audiences felt cheated: the advertising, dominated by star James Coburn's toothy grin - if Al Hirschfeld ever drew a caricature of Coburn, doubtlessly it would have been all teeth - suggested a comedy, which the movie is anything but.

Kino's new Blu-ray, licensed from MGM, is a mild disappointment. Though basically okay, the film elements and transfer are a bit weak and tepid, and the mono audio is lacking. 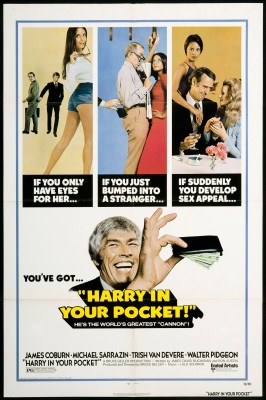 In Seattle's Union Station, Sandy Coletto (Trish Van Devere) observes amateurish pickpocket Ray Houlihan (Michael Sarrazin) clumsily attempt to steal watches and wallets before nabbing her watch. As she confronts him, somebody else steals her belongings. Stranded, she aimlessly wanders the city with Ray, who promises to find her train fare to Chicago. She finds him a little weird but still attractive, and the two soon have sex.

A fence tips Ray off to a "wire mob" (professional pickpockets, working as a team) plying their trade in Seattle and looking for recruits. They introduce themselves to Casey (Walter Pidgeon), an aging, cocaine-addicted "steer" who selects the marks and signals the "stalls" (who create diversions) and the "cannon" (who does the actual pickpocketing). Impressed by Ray's willingness to learn and Sandy's frankness, Casey introduces them to Harry (James Coburn), the wire mob's leader and cannon.

Harry lives large yet has never been arrested because he demands that his partners adhere to his strict rules. First and foremost: "Harry's Law." "Harry never holds," he tells them, "Not for a minute, not for thirty seconds. Harry never holds." Once picked, the "poke" is immediately passed along to one of the stalls or the steer. Harry quickly dumps all of the stolen personal effects (photos, ID, etc.), including credit cards, dangerous traceable things to be disposed of as soon as possible. (Amusingly, in one scene Harry complains about the shift away from cash to credit cards, "Money will go away and we'll all be numbers on a giant computer." Prescient, that Harry.)

Ray and, surprisingly, Sandy eagerly agree to Harry's terms, seduced by the glamorous lifestyle Harry and Casey seem to offer. Harry's more interested in Sandy, but Casey warns him that she may cause trouble.

Taken under Harry and Casey's wing, Ray and Sandy become skillful in their roles, Sandy as a stall with Ray deftly grabbing the poke from Harry seconds after his "dips." When Ray gets a little cocky, Harry decides to teach him a lesson by pretending to have a poke that Ray fails to receive. That puts him in his place for a while, but Ray wants to learn how to be a cannon, skills Harry refuses to teach him.

Harry also brazenly begins to manipulate Ray's emotions by ambiguously flirting (or not) with Sandy, who raises no objections because she resents weak-willed Ray's moodiness.

Harry in Your Pocket works on many levels, beginning with the authenticity of the mechanics of how wire mobs operate. The pickpocketing scenes, and there are probably close to a hundred shown over the course of the film, are so deftly done as to require the viewer to pay very close attention even after the audience is shown how it's done. At times it's like watching expert magicians at work; the sleight-of-hand is practically invisible. One shot dares to show a dip in slow-motion and yet, even slowed way down, it's still almost imperceptible.

The picture has almost no other characters of any consequence. It's all about their relationships to one another. Ray is inept and totally green at the beginning and dangerously impulsive and careless, but Casey recognizes Ray's raw talent, one that just needs a little nurturing. Sandy looks like an innocent "civilian" but she can be coldly pragmatic. She's got a great poker face that masks an attraction to the art, one very similar to Lindsay Crouse's lead character in the like-minded David Mamet film House of Games (1987).

Harry doesn't initially realize that he resents Ray's youth or that, in a few years, Harry is going to wind up like Casey, if not eventually land in the slammer. Hoping to forestall this, he demands a strict adherence to his "laws," but knows he can't control Ray and Sandy all the time, though he tries. Casey is more secure in their insecure profession, bemoaning the trend toward violent purse snatching, as if it were an unpardonable foul in a gentleman's game. But he also knows his place in the wire-mob. "I hold up my end," he says, "and Harry knows it."

This was 75-year-old Walter Pidgeon's last decent, substantial role. It's a touching last hurrah for the veteran actor, exposing a vulnerable side he rarely allowed himself to show. His abrupt departure from the story before it's over is almost upsetting to audiences, so strong of an impression does Pidgeon make throughout. A handful of mostly small parts followed until his retirement in 1978. Oddly, he'd play an elderly pickpocket in his penultimate role, in Two-Minute Warning (1976), as if his character was back in the game, albeit working solo.

Shot with Panavision lenses for 1.85:1 cropping, Harry in Your Pocket looks pretty blah overall, and probably the same transfer I saw back around 2002. In its defense, former TV producer-turned-film director Bruce Geller (Mission: Impossible) uses a lot of harsh, TV-type location lighting (a dolly shot through a hotel hallway is almost appallingly bad), but the color is pretty tepid and the clarity, while not bad, doesn't live up to its potential. The DTS-HD Master Audio 2.0 mono is also on the weak side, with the music/effects tracks too high and the dialogue track too low, and there's a general second-generation feel. No subtitles or alternate audio options.

The only extra is a trailer, a not-bad one, complete with graphics and narration.

A rich, fascinating film that gets even better with multiple viewings, Harry in Your Pocket is Highly Recommended.