Kino // R // June 16, 2015
List Price: $29.95 [Buy now and save at Amazon]
Review by Stuart Galbraith IV | posted July 15, 2015 | E-mail the Author
I didn't see The Onion Field (1979) when it was new, but I sure remember the original coming attractions trailer. Highly unusual, it consists entirely of stylized stills and eerie narration. It did a fine job selling the film, which was a modest success, earning a little under $10 million at the box office against a budget of probably no more than a couple million.

Seen all these decades later, The Onion Field still impresses to a point. Back in 1979, the film must have seemed mighty shocking, but in its wake and the influence it undoubtedly had on other true crime movies and TV films, its impact is a bit diminished. What's come since, the best examples of this genre (to say nothing of documentaries) have grown exponentially in sophistication.

Adapted by Joseph Wambaugh from his bestseller and directed by Harold Becker (The Black Marble), the film still impresses with its leading performances and its despairing story remains undeniably compelling.

Kino's new Blu-ray, licensed from MGM, looks excellent, sourcing a brand-new HD video master, and includes more than the usual extras than one normally expects from a sublicensed Kino title. 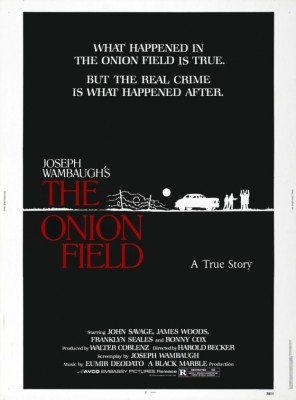 The two men, Smith and Gregory Powell (James Woods), both ex-cons, had been aimlessly robbing liquor stores. Powell, an out-of-control sociopath released from a prison for the mentally ill, pulls a gun on Campbell, who orders his partner to surrender his weapon, fixed on Smith.

(Spoilers) Kidnapped by Powell and Smith, Hettinger and Campbell are driven many miles into the night, eventually taken to an abandoned onion field near Bakersfield. Wrongly believing the kidnapping alone constitutes a capital crime (under the state's Little Lindbergh Law, Powell incorrectly presumed) Powell abruptly shoots Campbell in the mouth, killing him instantly. Four other shots are fired into the body, though the movie is ambiguous about whether Powell or Smith did the shooting.

Either way, the second half of the film concentrates on the terrible toll this story takes on both policeman Hettinger and criminal Smith. Many officers label Hettinger a coward, blaming him for the tragedy because he surrendered his weapon. Unable to cope with his guilt and subconsciously wanting to be punished, he becomes a shoplifter, loses his job, and contemplates suicide. Smith pleadingly and consistently insists that he killed no one, yet the cooperative, endlessly manipulative Powell, who drags the criminal case on for years and years, is treated with a degree of respect denied his former pal, possibly due to Smith's mixed-race.

After a decade of police being branded as "pigs," their image tarnished from the straight-shooting heroes projected on shows like Dragnet and Highway Patrol into club-carrying thugs cracking heads, the movie makes the compelling case that ordinary cops are more like under-empowered social workers fighting dangerous psychopaths like Powell, who game a system with too much legal wiggle room on their side.

From the start, Smith recognizes Powell as a dangerous, unpredictable ally, even unsuccessfully trying to skedaddle far from Powell's influence shortly before the murder. He fools himself into believing he's Powell's equal, able to restrain Powell's violent compulsions with his calmer, more rational demeanor, even screwing Powell's pregnant girlfriend as if to assert his quiet superiority. Ultimately though, he's as weak-willed and submissive as Powell is controlling and confident, their relationship culminating in the film in a still-shocking prison scene.

The four leads are excellent, Woods lucks out with the flashiest of the roles, but his performance is genuinely disturbing and oozes with malevolence. Savage and Danson are fine, but Seales, an openly gay actor who died young from the AIDS virus, delivers an impressively harrowing performance.

Reportedly Kino ponied up for MGM's new 1.85:1 cropped widescreen transfer, which except for mildly grainy title elements looks great. The DTS-HD Master Audio 2.0 mono is also above average though one almost wishes for a 5.1 remix in this instance. No subtitles or alternate audio options, and the disc is Region A encoded.

Supplements include a 30-minute featurette from 2002, along with an audio commentary possibly recorded around that same time, with director Harold Becker. In high-def is a new, 10-minute interview with star John Savage, while that memorable trailer is included, too, albeit badly transferred.

A very fine drama, dated only slightly due to the way the genre has evolved since, The Onion Field still comes Highly Recommended.