"...fanaticism and ignorance is forever busy and needs feeding." 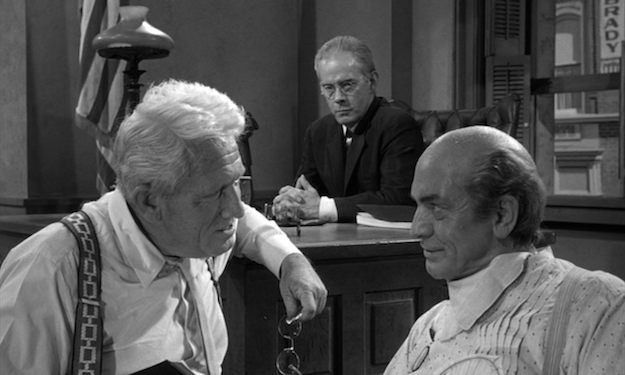 Shortly before I revisited Inherit the Wind for this review, a friend posted a link on Facebook to a blog feature about a new study that showed Louisiana teachers are now using the Bible in science class "in conversation with" Charles Darwin's theory of evolution. The fact that the same tensions between science and religion that are dramatized in Inherit the Wind continue to play themselves out in such a public and polarizing fashion -- fifty-five years after this film was released and ninety years after the real legal case that inspired it -- illustrates both the main strengths and the main weaknesses in director Stanley Kramer's film. While the film's main conflict still seems timely, its point-of-view is too simplistic. At the end of this film, we come away with the sense that the good guys got their moral victory and the bad guys were left licking their wounds. In real life, both sides thought they won and have just gotten more firmly entrenched in their beliefs with the passing of time.

Based on the 1955 play by Jerome Lawrence and Robert Edwin Lee (Auntie Mame), this enjoyably stage-y 1960 adaptation fictionalizes the events of the 1925 Scopes "Monkey Trial," in which famed legal orators Clarence Darrow and William Jennings Bryan went up against each other on the subject of teaching evolution in schools. In real life, substitute schoolteacher John T. Scopes agreed to be a "test case" to challenge the Butler Act, which forbade the teaching of evolution or any other science that might attempt to disprove the Bible in Tennessee. (Reportedly, Scopes wasn't even sure if he had gotten around to teaching his class the section on evolution in the biology textbook, but found the law ludicrous nonetheless.) In the film, Scopes's stand-in Bertram T. Cates (Dick York) is a much more earnest, less overtly political idealist who finds himself caught up in an unjust legal quandary. As he starts discussing Darwin in class one morning, he is immediately locked up by the local authority who wish to make an example of him.

The whole town -- changed from Dayton, Tennessee, to the fictional "Hillsboro" -- is thrown into an uproar by the acts of this godless heathen. The local reverend (Claude Akins), who also happens to be the father of Cates's fiancee Rachel (On the Beach's Donna Anderson), does his part to stir up righteous anger in the town against his would-be son-in-law. The whole thing turns into such a circus that it draws the attention of the film's Bryan stand-in, Matthew Harrison Brady (Frederic March), who decides to join the prosecution in this holy crusade. Newspaperman E.K. Hornbeck (read: H.L. Mencken, as smoothly played by Gene Kelly) is also drawn to Hillsboro, and sensing that Bert Cates is the only thinking man in town, he has his newspaper send for the only person who can properly defend against Brady: his old friend and former colleague Henry Drummond (i.e., Darrow, played by Spencer Tracy), who is agnostic.

Stanley Kramer has oft been criticized for using his films to push a liberal agenda, and it's hard not to watch his portrayal of the religious community in Hillsboro as an unthinking mob and figure that his detractors might have a few solid points. Of course, the original playwrights and the adapting screenwriters Nedrick Young* and Harold Jacob Smith are trying to draw parallels between the Scopes trial and the mass hysteria of McCarthyism, which isn't a stretch, but they sure could be less melodramatic about it. The choice to go so broad might not seem so off-key if it wasn't for the fact that generations of people have pretty much accepted the events of Inherit the Wind as historical fact. That's not necessarily the film's fault, but it does make a modern viewer wonder why the film sticks to the actual events (which are arguably entertaining and crazy enough) in some areas and then gets more fanciful in others.

Even more than what it's about, Inherit the Wind is notable for its great lead actors giving great performances. Brady is a giant spotlight-hogging ham, but as Fredric March plays him, he is one of the human race's all-time greatest hams, a delight to hear even when you know he is full of hot air. Some might argue that Brady comes off as a shallow idealogue, but if that's so, it's more on the script than on March. Spencer Tracy, on the other hand, plays Drummond like a wise old grandpa, but one whose wheels in his head are always turning faster than he lets on. While his opponent bloviates, Drummond quietly formulates his more than perfect retorts. Meanwhile, Gene Kelly nearly steals the show, using a tablespoon of sugary charm to help Hornbeck's hilariously acrid commentary on the trial go down. The rest of the cast acquits themselves well, although much of the action away from the main characters -- especially the subplot involving the reverend's constant admonishments of his daughter -- often veers dangerously close to TV soap opera territory.

One wishes for a time when the conflicts of Inherit the Wind feel like ancient, unfamiliar history, but in the meanwhile the film remains a flawed but potent tribute to free thinking.

*Young was blacklisted at the time Inherit the Wind was produced and he was originally credited as "Nathan E. Douglas." This presentation has digitally altered credits which present Young's real name in place of the original pseudonym. 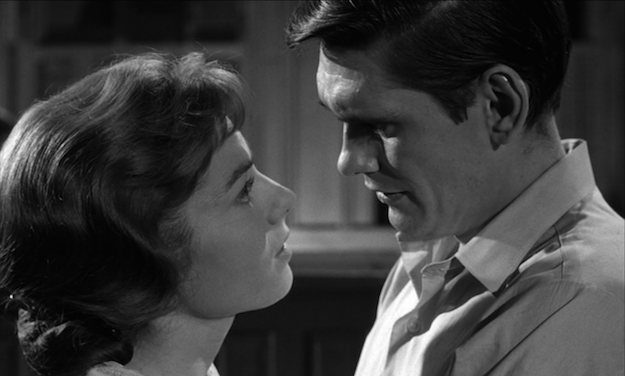 The DVD
The Video:
Much like the newly re-released Judgment at Nuremberg, this presentation is Kino Lorber's belated SD presentation of the same master provided to Twilight Time for their recent Blu-ray release. As such, the widescreen 1.66:1 image on this disc is outstanding for DVD. The picture offers strong clarity with a nice full range of grayscale and deep rich blacks. No significant digital compression issues either.

The Audio:
The Dolby 2.0 mono audio is good overall, but it seems to have suffered slightly in the lossy compression. While all of the dialogue and music is clear and understandable and well-mixed, there's a persistent ghostly sizzle sound that haunts the dialogue during quieter moments. I watched part of this film in my home theater and part of it on my laptop with headphones. It wasn't dramatic in the home theater, but I noticed something was there. When I put on headphones, it was undeniable. It's not enough of a flaw for me to recommend staying away from this release, but it seems very unfortunate. English subtitles are also available.

Special Features:
Just trailers for this film and two of Stanley Kramer's other films from this era, On the Beach and Judgment at Nuremberg.

Final Thoughts:
Inherit the Wind is made to be an actors' showcase, and Spencer Tracy, Fredric March, and Gene Kelly really make the most of it. Some of the drama is a little dated and cornball, but these flaws do little to rob the film of its power. If you can afford it, you should spring for the Blu-ray of this classic, but if not, the DVD still comes Recommended. 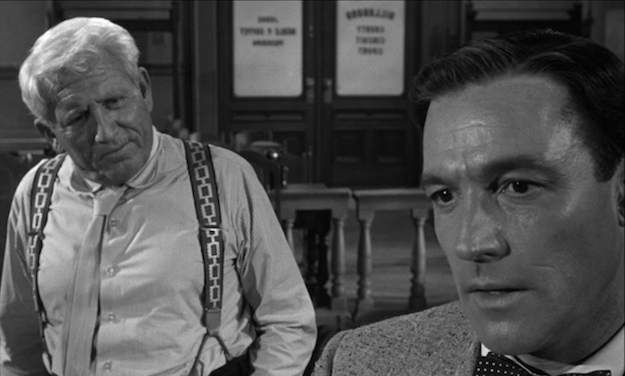