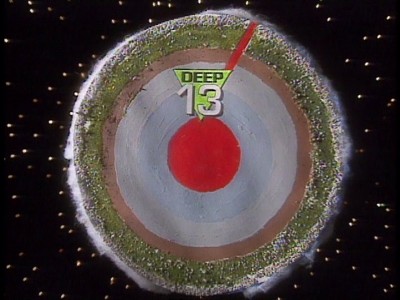 The "not-too-distant future" has arrived. Shout Factory's deluxe repackaging of Mystery Science Theater 3000, the indelible bad-movie-and-robots roastathon, continues at full speed with Vol. XXXIII (that's 33 for the Roman numeral-illiterate). Breaking out a handy calculator, this volume means that a grand total of 132 episodes of Joel, Mike, Crow, Tom Servo and the gang have gotten a DVD release (not counting Rhino's individual-episode DVDs; were there any overlaps between sets?) - roughly two-thirds of the total aired between 1988 and 1999. For a show that once survived on devoted fans exchanging bootlegged VHS tapes, it's an astonishing embarrassment of riches. As with previous volumes, this 4-disc set presents a quartet of vintage episodes with new-to-disc extras, colorful poster art, and other goodies.

Like many long-running series, MST3k wasn't without its problems. It took a couple of years for the heckling-and-skits format to fully gel, some complacency set in following the move to the Sci Fi Channel, and even the peak years contain a few "off" installments. By and large, however, it was a wonderful program which holds up incredibly well. Although not the first effort to lampoon crappy old movies (remember Mad Movies with the L.A. Connection?), MST3k set the standard so well that even its creators have had some difficulty recreating it. Lightning doesn't strike twice, and Rifftrax just isn't the same. In case anyone still isn't familiar with the show's basic premise, I'll refer to my DVD Talk review of the XXVII set from 2013:

An ordinary working stiff at the Gizmodo Institute (Joel Hodgson as Joel, later Mike Nelson as Mike) gets beamed onto a rickety spacecraft known as the Satellite of Love. Turns out the guy is a pawn in the scheme of world domination engineered by mad scientist Dr. Forrester (Trace Beulieu), who uses Joel/Mike as a guinea pig to measure just how much bad movie watching it takes to drive a person crazy. Like the theme explains, our subject "can't control where the movies begin or end," but at least he has the company of "his robot friends" - the sarcastic, short-armed Tom Servo (mainly voiced by Kevin Murphy), and the Minnesota-accented, gold-tone Crow (mainly Trace Beaulieu). In later seasons, Dr. Forrester's duties are taken over by his crazy mother, Pearl (Mary Jo Piehl).

The contents of XXXIII reflect a cross-section of the series' 1988-99 run. It's got two Joel-fronted episodes and two Mikes; three from the Comedy Central years, and one from the Sci Fi channel era.

Earth Vs. the Spider
Episode #313; September 14, 1991.
Another campy teen-horror quickie from Roger Corman's American International Pictures, 1958's Earth Vs. the Spider contributed to one of the best-ever Joel-fronted episodes. Shoddy monster movies tend to better lend themselves to the MST3k format, and this Bert I. Gordon opus delivers in spades - packed full of spontaneous gags, non sequiturs, and clever pop culture references. In a plot heavily borrowed from Them and dozens of other giant-creature-on-the-loose flicks, this one concerns a pretty blonde teen who - concerned over her missing father - coerces her boyfriend to explore the remote area outside town where he was last known to have driven. After discovering the father's totaled truck, the two venture into a nearby cavern occupied by something the town has magically never noticed - a building-sized spider! (Or room-sized, depending on the scene - it's that kind of movie.) The spider eventually ends up getting tranquilized and stored in the high school auditorium (?), awakening and wreaking havoc on the town in predictable, crappy effects-enhanced ways. Surprisingly competent in the directing and acting department, the movie nevertheless has just one genuinely chilling moment - when a roving camera pans through a destroyed suburban street to a lone, crying and bloodied infant. Joel and the bots register the same reaction I did - what the heck?

Preceding the movie, this episode has Joel, Crow and Tom riffing on Speech: Using Your Voice, a creaky educational short from 1950. Skits with Joel and the bots playing a spider rock band and discussing dangerous yet fun toys from the '60s complete the merriment.

Memorable lines: "Shame on you, Bert I. Gordon." (characters excitedly discussing Gordon's The Amazing Colossal Man); "It's an Aunt Bee convention."; "Spider by Spencer's Gifts."; "No spiders were squished, stepped on, flushed, or made to suffer any emotional distress during the making of this film. One spider did die of old age; we have two letters from doctors confirming this." 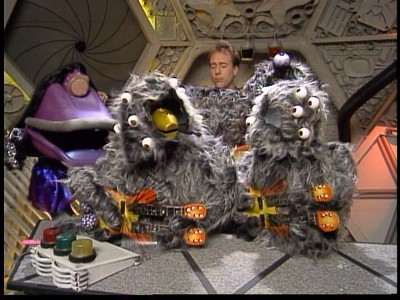 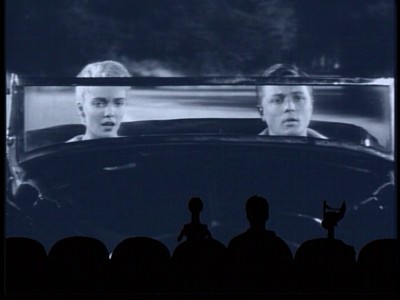 Daddy-O
Episode #307; July 20, 1991.
Daddy-O is another misbegotten teensploitation flick from Roger Corman. There's enough quirkiness in this crazy, man, crazy Hot Rod/Crime hybrid to supply plenty of good quotes from Joel, Crow and Tom Servo - although even they seem to be bored by this 1958 quickie. This muddled drama placed its bets on the limited appeal of Brillo-haired, tight shirt-wearing singer-actor Dick Contino. Contino's truck-driving Phil Sandifer is a 30-year-old teenager who sets about finding his best friend's killer, exposing him to a seedy dope-smuggling ring run by a variety of characters straight out of a B-movie stock character book. We first see Phil as his vehicle gets swerved off a highway by a slick convertible driven by a flirty blonde, Jana Ryan (Sandra Giles). Later, Jana sees Phil performing at a local club under the name "Daddy-O" and challenges the smooth-talker to a drag race. Losing the race (and his license), Phil meets up with a shady nightclub owner, Sidney Chillas (Bruno VeSota), not realizing that the Orson Welles lookalike was using the club to front an underground smuggling operation. Our beatnik heroes Phil and Jana somehow avoid the burly, Coke-bottle glasses wearing henchman so that justice prevails - enabling Phil to survive another day to croon, twist his hips, and play accordion. Comedy gold, I tells ya.

Daddy-O is preceded by Alphabet Antics, a goofy educational short with odd imagery and a rhyming narrative that prompts lots of inspired riffing. Skits include Joel demonstrating subtle variants on the classic spit-take to the bots and a surreal, repetitive closing-credits gag involving Dr. Forrester, TV's Frank (Frank Conniff) and a faulty button.

Memorable lines: "P is for PETA, who's boycotting this." (bison in a harness); "Is that Brian Dennehy, or Charles Durning?" (portly character actor); "Like my hair? I just mowed it." (extra with a flattop); "Why couldn't this guy be on the plane instead of Buddy Holly?" (Contino sings "Rock Candy Baby"). 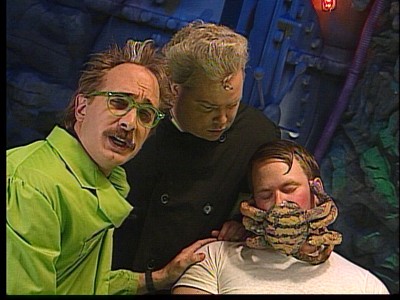 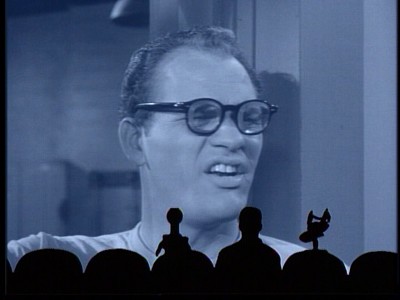 Teen-Age Crime Wave
Episode #522; January 15, 1994.
Teen-Age Crime Wave was a perfectly competent juvenile delinquent drama produced by Columbia Studios in 1958, lending itself to a decent, funny MST3k that aired early on in Mike Nelson's hosting tenure. This story stars glassy-eyed young actor Tommy Cook as Mike Denton, an unrepentant little hoodlum who goes on the run with his jailbait girlfriend, Terry (Mollie McCart), and Sue (Jane Koberly), a pretty, innocent friend who comes to regret being in the wrong place with the delinquent lovers. On the run from the police, the trio ditch their car and take refuge in the rural California home of an elderly couple (James Bell and Kay Riehl). While Mike schemes for the right time for alert his friend for help, he and Terry spend a few tense days terrorizing the old couple and threatening poor Jane if she squeals to the cops. Although the MST3k crew tends to riff better on inherently weird, zero-budget movies (like the preceding episode screening bizarro Mexican flick Santa Claus), Mike and crew manage to get a ton of clever quips in this standard j.d. potboiler. From the opening-credits crawl with Crow doing a Star Wars callout to the final, ridiculous shootout at Griffith Observatory, this episode turned out way more enjoyable than it initially appeared.

Skits in this episode include Mike and the bots parodying that '90s TV staple, the Mentos commercial, a melodic salute to the "doughy man" characters frequently seen in '40s-'50s movies, and another maddeningly repetitive, end-credits-interrupting bit with Dr. Forrester and TV's Frank. 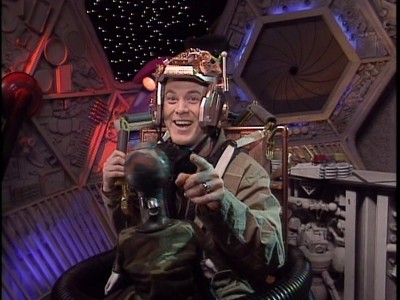 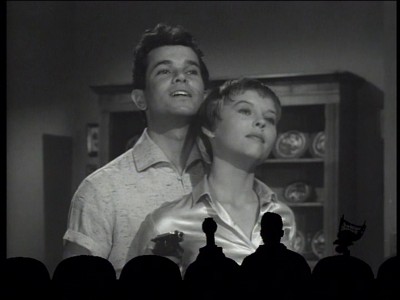 Agent for H.A.R.M.
Episode #815; August 2, 1997.
Mike and the bots had their hands and other digits full with the Sci-Fi Channel episode Agent for H.A.R.M.. This 1966 James Bond ripoff, produced by Universal as the pilot for a never-made television series, at first appears to be great, campy fun. It turns out being much, much worse, however - starting with the disastrous lead casting of Peter Mark Richman. As superspy Adam Chance, Richman gives the character an effete fake-elegance (the daffodil-yellow cardigan he wears doesn't help), making him less James Bond, more Dr. Smith of Lost in Space. Our cottony hero is called upon to protect a Soviet scientist and his sexy niece from Russian agents hot on retrieving the antidote for a deadly alien spore that turns human flesh into bubbling, avocado green goo. Mike and crew mercilessly rib this movie's weirder aspects, such as the henchman with a strong resemblance to Prince and the many needless stretches of humdrum non-action (another scene with people driving somewhere - whoopee!). Despite the jabs, they can't hide the fact that it's a turgidly directed, barely watchable mess.

This episode includes a recurring, black and white Inherit the Wind sendup with Mike on trial for crimes against the universe. More amusing than ha-ha funny (as the Pearl period tends to be), yet there's some decent hilarity to be had with Bobo (Kevin Murphy) as Mike's defense lawyer, Pearl Forrester (Mary Jo Piehl) as prosecutor, and Observer (Bill Corbett) as the judge. 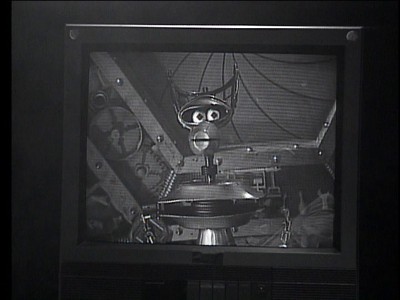 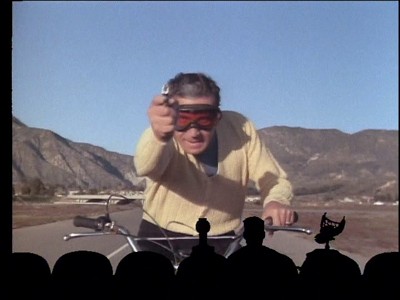 Visually, all four episodes sport the kind of glassy, overly sharpened picture one would expect with vintage videotape-recorded TV productions. Even on the earliest episodes, the image is relatively sharp and wobble-free. The later Mike-hosted episodes fare the best visually, although I noticed several occasions where the color on Agent for H.A.R.M. was over saturated.

A simple stereo mix, pleasant if unremarkable, is supplied with all four episodes. There are not a lot of flaws with the soundtrack, even in the earliest episodes. No subtitle options are provided.

As with previous volumes, each disc includes a cool original featurette (two on Teen-Age Crime Wave) supplying background info on the films, producers and actors being shredded. Nicely produced by Ballyhoo, they are - This Movie Has Legs: Looking Back at Earth Vs. the Spider (11m), Beatnik Blues: Investigating Daddy-O! (9m), Film It Again, Sam: The Katzman Chronicles (22m). Two other featurettes include new interviews with the actors in these grade-z flicks - Tommy Cook: From Jungle Boy to Teenage Jungle (14m), and Peter Mark Richman: In H.A.R.M.'s Way (8m). MST Hour Wraps are included on the Spiders and Daddy-O discs. These bumpers were produced for the '90s MST3k syndicated edition which repackaged each movie as two individual hour-long episodes. In the 5-minute segments, Mike Nelson hosts in character as a dim, sport-coat wearing middle-aged man in a grey beard and aviator eyeglasses (a spot-on parody of Jack Perkins, the folksy, irritating A&E cable network personality). Again, colorful Mini posters reproducing Steve Vance's wild artwork for each title are included in the box. Theatrical Trailers on the Teen-Age Crime Wave and Earth Vs. the Spider discs round out the extras.

Shout Factory continues to deliver the goods with the 33rd volume of Mystery Science Theater 3000. Aside from the incompetent spy thriller Agent for H.A.R.M., the Vol. XXXIII movies getting skewered by Joel, Mike, Crow and Tom Servo rate as pleasantly mediocre. The MST3k crew rises to the challenge, however, on Earth Vs. The Spider, Daddy-O and Teen-Age Crime Wave. Taken together, all four are good, worthwhile episodes. Packed with cool extras and with Shout's usual attractive packaging, this set comes Highly Recommended. 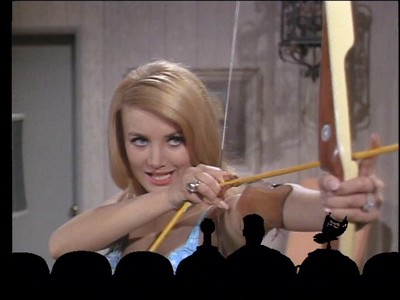 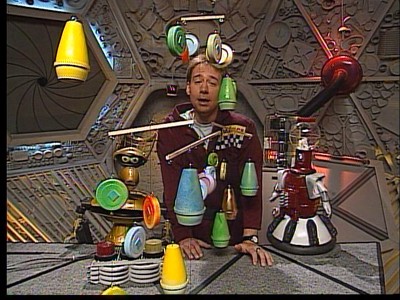