Timbuktu is a powerful indictment of the direct effects of religious extremism on the human soul. A profoundly moving piece of artistic expression against those who seek to corrupt and undermine the human spirit in the name of power, it's an equally beautiful and enraging experience that you'll think about long after watching. 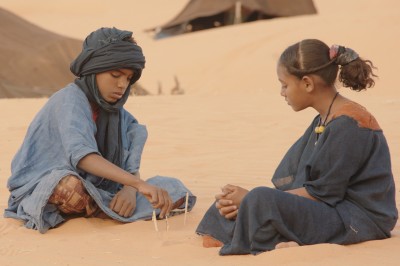 Co-writer/director Abderrahmane Sissako's masterpiece consists of a series of vignettes about how the otherwise calm and humble lives of people in a small society around the dunes of Timbuktu are destroyed by a regional takeover from a group of extremist Islamic Jihadists. Even though their affiliation is not clearly stated in the film, the Jihadists fly the ISIL flag, leading the audience to believe that they're part of the terrorist organization that's been laying waste to many parts of The Middle East in recent years. The ISIL connection makes the film feel immediate and timely, but the universal way Sissako deals with the corruption and intense harm of any form of extremism makes his subject timeless and instantly relatable.

As soon as they show up in a tiny desert town, the Jihadists immediately implement a series of draconian rules that are more about the complete control and subjugation of other human beings than a genuine attempt at satisfying religious dogma. Sissako makes this point throughout the film with the absurdity that results from these rules. He rests his camera on a group of Jihadists trying to figure out how to fold an old man's pants since the old man doesn't have shorts, and apparently the Jihad calls for all men's lower legs to be exposed.

On the other hand, the fact that they force women to cover up from head to toe wasn't enough, so they force women to wear gloves, because, well, you got me there. If you're aroused simply by seeing female hands and can't control yourself, that says a lot more about you than the hands in question. One of the most emotionally draining yet inspirational scenes in Timbuktu takes place when a woman whose trade is to sell fish finally breaks down and tells the Jihadists that they can cut her hands if they won't let her work anymore.

With scenes like these, Sissako shows the audience the true tenacity of human freedom and expression. The best scene in the film depicts a group of young men playing soccer without a ball, since those in power forbid sports. A Hollywood filmmaker would have milked that moment with some unnecessary slow-motion shots and a maudlin score, yet Sissako organically finds the power within the situation and doesn't overdo it.

The vignettes are loosely strung around a main story involving a tragedy that befalls a cattle herder (Ibrahim Ahmed) and the frustratingly unfair trial he ends up having to endure at the hands of the fundamentalists. The central scene in Timbuktu concerns a conversation between the cattle herder and his captor. During one of the most soulful deliveries I've seen in a long time, the herder confesses to the captor that even though he doesn't fear death, the thought of never seeing his beloved daughter again haunts him. Of course the captor doesn't care about his sob story, he only wants to know if the herder can produce the 40 cows as payment for blood money, as laid out in the Q'uran. The performances by the actors who play the herder and his family are natural and heartbreaking, leading to a finale that's poignant and inevitable.

Timbuktu contains some of the most gorgeous cinematography of last year. Sissako takes full advantage of his vast and desolate West African locations to present beautiful shots than presses the theme that the grand scale of nature doesn't really care about our tiny squabbles. There are some shots of the Timbuktu country side that are so breathtaking, that one can almost hear Sissako saying "Suck it Terrence Malick" before dropping the mic. Of course he'd never do that, the man in the interview presented in this disc might be the most humble person on the planet. The film's 1080p transfer is incredibly clean and shows astounding definition. Regardless of the subject matter, you can easily use sections of Timbuktu as a demo disc.

The DTS-HD 5.1 mix presented on this Blu-ray does a great job capturing the varying depths of the sound presentation. Timbuktu is a very introspective film with a lot of silent moments, usually broken up by loud sounds (I'm looking at you, opening scene, which made me jump out of my seat while cranking the volume up to make sure the sound on the disc was working). This transfer does an excellent job bringing the experience to the small screen.

Interview with Abderrahmane Sissako: This 30-minute interview shows a discussion that took place at The Film Society of Lincoln Center after a screening of the film. Sissako calmly and succinctly relays his inspirations for the film and the production process. I just wish that the parts with the translator were cut out and we got subtitles on Sissako's answers. In this raw state, the interview drags a bit because we always have to wait for the translator.

Gorgeous, haunting, stupefying and moving, Timbuktu is an artistic slap in the face of religious fundamentalism. This Blu-ray does justice to the film's breathtaking visuals. Timbuktu comes very highly recommended.