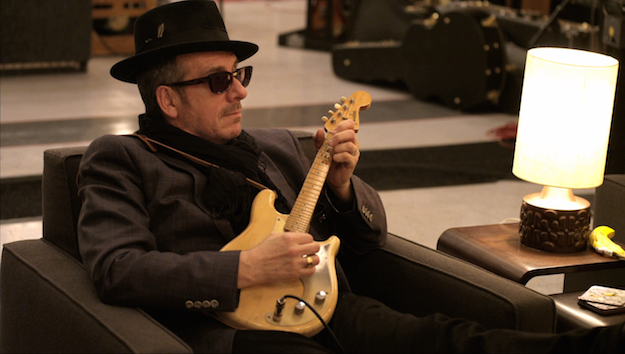 In the summer of 1966, Bob Dylan was in a motorcycle accident that caused him to withdraw from the public eye while he recuperated. Some have conjectured that the burnt-out Dylan was never really involved in such a crash and that he just used it as a cover story to explain his sudden decision to turn hermit. Whatever the circumstances, Dylan's sudden seclusion led to one of his most creatively fertile years, in which he recorded dozens of tracks with his buddies the Hawks (aka The Band) and wrote dozens more lyrics that never got set to music. The recordings were never meant for public consumption, but Dylan sent some of them out as writer's demos for other performers to record. This led to bootlegging, which finally convinced Dylan to authorize a double-LP release of some of the songs, as The Basement Tapes, in 1975.

Nearly forty years after that official album release, Dylan's record label began prepping a massive box set of the complete Basement Tapes recordings, including alternate takes and plenty of songs that never made the official cut. Around the same time, Dylan discovered a box of lyrics written during this 1967 burst of creativity and offered them to his former collaborator T-Bone Burnett to figure out something to do with them.

Burnett decided to assemble a supergroup of performers well-versed in folk and rock music to come up with their own instrumental settings for Dylan's words. The band, dubbed "The New Basement Tapes," consists of Elvis Costello, Marcus Mumford of Mumford & Sons, Jim James of My Morning Jacket, Rhiannon Giddens of Carolina Chocolate Drops, and Taylor Goldsmith of Dawes. Their album, Lost on the River: The New Basement Tapes, was released one week after the archival Basement Tapes Complete box set.

The documentary Lost Songs: The Basement Tapes Continued, which aired on Showtime last November, offers a behind-the-scenes look at the recording of the Lost on the River album. Though the film doesn't take a strictly chronological approach, director Sam Jones (who did the Wilco doc I Am Trying to Break Your Heart) shapes his copious in-studio footage into numerous vignettes that give these two weeks of recording a palpable dramatic arc.

In the beginning, the performers -- especially the younger, greener ones -- wonder and fret about what the collaboration is going to be like, and about whether they are going to be able to pull their weight. Marcus Mumford is particularly nervous because, even though he is the only member of the group who has had a number one record on the charts, he's not nearly as prolific or fast at writing as Elvis Costello or Jim James. Before recording starts, Costello is shown playing back a demo he created mostly by sneaking into an airplane bathroom and singing into his phone. James plays back a layered, multi-track demo that features a choir of backing vocals. Mumford, meanwhile, shows up on the first day with a sketchy idea for a song and another riff besides. 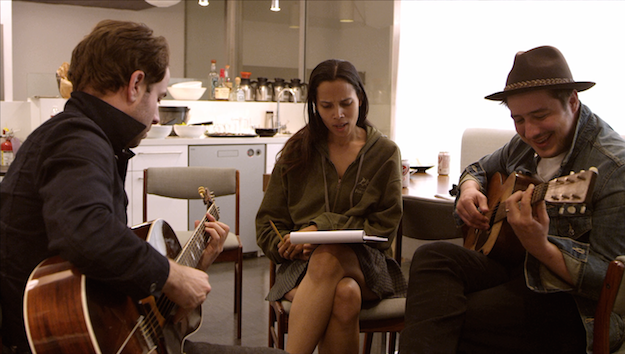 There's a bit of competitiveness to the project, because many of the band members pick the same lyrics and offer different arrangements for the recording. This becomes a problem for Rhiannon Giddens, for example, because she is incredibly talented but not as technically proficient as her bandmates, so she struggles to find collaborations within the group to help her realize the music she hears in her head because she doesn't know how to say, "Try a descending bassline over a B minor chord at that point," or whatever. The development of her version of the title song, "Lost on the River," becomes a thread that runs through much of the film. There's elation when she's able to jam with Marcus Mumford and Taylor Goldsmith to flesh out her melodic ideas. But when she brings it to the full band, it gets muddled and loses the spark. T-Bone Burnett watches from the control booth, not wanting to squash Giddens's creativity, but also well-aware that the band has already cut three other musical arrangements for that lyric. I won't say any more, but the payoff is worth it.

Each player's trajectory becomes clear as the film goes on. Costello is the old hand who's going to enjoy himself no matter what happens. James is similar but with a more meticulous approach that sometimes flies in the face of what the project is supposed to be about. Mumford is the tortured artist who manages to get some good work out past his self-critical filters. Giddens is the relative outsider who eventually finds her voice within the material and within this group. Goldsmith, meanwhile, is the utility player who is able to facilitate the others' visions, but who is also hungry enough to keep generating his own material to prove he deserves to be in the room.

While the recording sessions offer plenty of engrossing moments, director Jones overstuffs the film with material about the recording of the original Basement Tapes that does not work as well. Jones manages to get interviews with Dylan and Robbie Robertson and Rick Danko from The Band, but they are only audio interviews. For the visuals in these sections, Jones offers up distractingly staged reenactments of the 1967 jam sessions. While there's certainly an interesting backstory to be told about this period, it is a misstep to keep crosscutting between these passages and the new recording sessions.

This approach is apparently meant to suggest that the spirit of those original recordings are spurring on these new recordings, but instead it just underlines how different the circumstances between the sessions are. The original Basement Tapes were made by Dylan and The Band in an actual basement, with no stress and no commercial expectations. Lost on the River, meanwhile, is being recorded in a fancy studio at Capitol Records with the stress-inducing knowledge that a record must come out at the end of this.

Even with its flaws, Lost Songs is pretty fascinating. The process of artistic creation can be esoteric and abstract or even dull and ordinary, which doesn't necessarily make it the most ideal subject for a film, but Jones and his editors manage to successfully dramatize the little and large struggles faced by The New Basement Tapes and make the collaboration inspiring in the process.

Will the album Lost on the River become as influential as the original Basement Tapes? It's doubtful... but then again, who knows? This film justifies its existence either way. 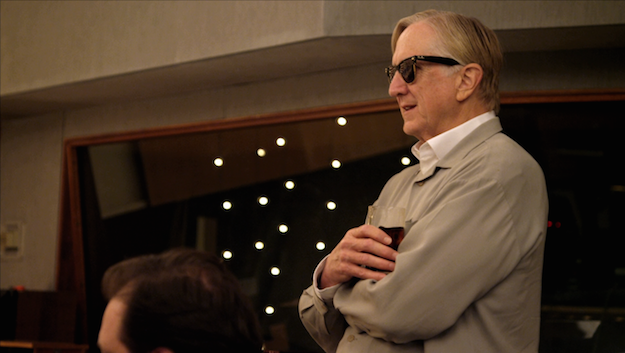 The Video:
Eagle Rock provides an excellent AVC-encoded 1080p 1.78:1 presentation. The main recording studio footage is sharp and clean with no compression issues. Much of the staged faux-vintage footage looks like it was shot on super 8 film and then intentionally muddied up. Even so, the transfer during these sequences is quite rich and attractive.

The Audio:
The disc comes with two options: a DTS-HD MA 5.1 surround mix and an LPCM 2.0 stereo mix. Both mixes are clean and balanced, but the 5.1 version is the clear winner in terms of atmospherics and even power -- the surround mix just has a bit more force to it. The disc offers four subtitle options which appear only during the spoken sections of the film and not during the songs: English, French, Spanish, and German.

(HD, 24:20 total) - Uninterrupted in-studio performances, presented in LPCM 2.0 stereo, of six tracks: Goldsmith's "Diamond Ring," James's "Down on the Bottom," Giddens's "Hidee Hidee Ho #16," Mumford's "Kansas City," Costello's "Six Months in Kansas City (Liberty Street)," and Mumford's "The Whistle Is Blowing." Three of these songs are on the "standard" version of the finished album, while the other three are only found on the "deluxe" extended version of the album.

Final Thoughts:
Lost Songs documents an unusual project, in which five singer-songwriters with five distinct personalities must figure out how to work with not only each other but also their absent lyrical collaborator, Bob Dylan. Both the musicians and the filmmakers come out the other side of this unique process with interesting work to show for it. You don't have to be a fan of Dylan or these artists to get sucked into the film, but of course it helps. Highly Recommended. 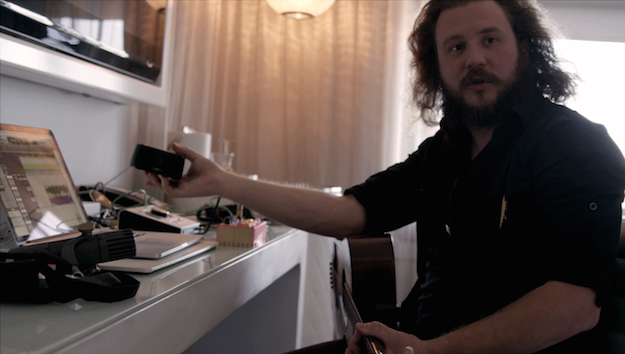