Arrow Features // Unrated // May 12, 2015 // Region 0
List Price: $39.95 [Buy now and save at Amazon]
Review by Stuart Galbraith IV | posted May 29, 2015 | E-mail the Author
The Strange Case of Dr. Jekyll and Miss Osbourne (1981) is an audacious, admirably unique and not-unintelligent take on Robert Louis Stevenson's Strange Case of Dr. Jekyll and Mr. Hyde, looking quite unlike any other film version of the novel. One can see how some viewers might get sucked into its strange, immersive energy, but this reviewer also found it profoundly dull, pretentious, illogical, and at times quite revulsive: anti-eroticism from Polish-born French director Walerian Borowczyk, labeled by some a "genius who also happened to be a pornographer."

A French-West German co-production, the movie was apparently barely shown outside those countries, reportedly just one week in Britain in one theater under the title Blood of Dr. Jekyll. Later, it turned up on home video under at least one other moniker, Bloodlust, while Arrow's new Blu-ray has box art calling it The Strange Case of Dr. Jekyll and Miss Osbourne, Borowczyk's preferred title, even though the video transfer retains the original French one, Dr. Jekyll et les femmes, translated in the subtitles as "Dr. Jekyll and His Women.

Arrow Films certainly deserves praise for the film's excellent 2K restoration, scanned from the original camera negative, and the disc's scads of supplementary features. Included on this region-free Blu-ray are both the original French track and the English-dubbed version. The latter is quite awful, though it retains supporting player Patrick Magee's original voice, this being his last film role. (And he alone, in both versions, pronounces the name of Stevenson's protagonist correctly.) Only the French version seems to utilize Swiss actor Howard Vernon's voice, while the star of the film, German actor Udo Kier, sounds dubbed on both versions. 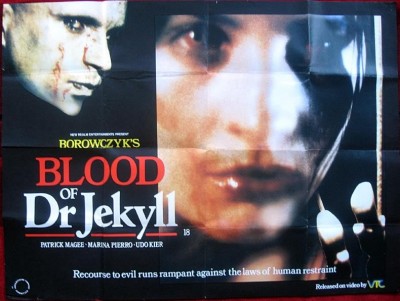 Nearly the entire picture is confined indoors, in the large London house belonging to Dr. Henry Jekyll (Kier) and his mother, she seemingly crippled by polio. Engaged to Miss Fanny Osbourne (Marina Pierro), he's being feted by the cream of the Victorian crop, including General William Danvers Carew (Magee) and his adult daughter, the Reverend Donald Regan Guest (Clement Harari), and esteemed Dr. Layton (Howard Vernon), who dismisses of Jekyll's passionate theories on transcendental medicine.

Later, Jekyll disappears into his laboratory, bathing in a bubbly mix of "solicor," reemerging as sadistic madman Edward Hyde (Gérard Zalcberg). This film's Mr. Hyde is certainly visually striking (while resembling Kier just enough that it took me awhile to realize that it was a different actor playing Hyde): weird, close-cropped hair, gaunt facial features, and wild-eyed. As Hyde, Zalcberg suggests a young Christopher Eccleston as Lloyd Christmas, Jim Carrey's role in the Dumb & Dumber films.

What follows, ad nauseum, mostly consists of madman Hyde, loose in the house, terrorizing all the guests from room-to-room, one-by-one, threatening and inflicting violence on all the men, raping at least one, while sadistically humiliating all the women sexually, who find the morally unfettered Hyde positively irresistible. For, you see, Jekyll's Hyde in endowed with a super-colossal penis that'd put Milton Berle's legendary one to shame.

The movie at this point becomes highly illogical. Once Hyde is chasing everybody armed with a centuries-old bow and poison-tipped arrows, you'd think they'd make a beeline for the front door and run straight for the nearest constabulary. Instead, the cast of characters pretty much just cowers and hides from Hyde, he intensely determined to inflict as much physical and psychological trauma as possible.

The film has its articulate defenders, and Arrow's many supplements make the case for the picture's supposed artfulness, but were I not bound to review, I would have given up on it long before it was over and, frankly, couldn't wait for it to end, even though it runs just 91 minutes.

The booklet essays accompanying the disc are smart and intelligent, yet watching the film was for this reviewer like suffering through Jess Franco's not-dissimilar erotic-horrors, pictures likewise reassessed and praised by some to the skies. Borowczyk's film clearly is more competently made and, at times, more obviously thoughtful and even ambitious, but its appeal escapes me utterly.

Filmed for 1.66:1 widescreen, The Strange Case of Dr. Jekyll and Miss Osbourne looks great. The 2K restoration is basically flawless, and a package includes a standard-def DVD, also region-free, as well. The LPCM 1.0 mono sound is also fine, supported by SDH subtitles for the English dub, and separately translated English subtitles for the French version, which has slight dialogue differences.

The gobs of extras include an appreciation by critic Michael Brooke; and audio commentary with cinematographer Noel Very, editor Khadicha Bariha, assistant Michael Levy, and filmmaker Noel Simsolo, and which incorporates audio interviews with Borowczyk; interviews with Kier and Pierro; Himorogi (2012), a short film made in homage to Borowczyk by Marina and Alessio Pierro; an interview with artist Adrian Martin and Cristina Alvarez Lopez, as well as a video essay by same; a featurette on composer Bernard Parmegiani (I found his use of a banging, discordant piano more irritating than effective); Happy Toy (1979), a short film by Borowczyk; and interviews with former assistant Sarah Mallinson, and animator Peter Foldes; Return to Melies: Borowczyk and Early Cinema, a featurette by Daniel Bird; a trailer with optional commentary; and the aforementioned booklet.

Others may find great value in The Strange Case of Dr. Jekyll and Miss Osbourne, but in all honesty I found it dreary and fitfully repulsive, intelligent on some levels but mostly a total misfire. For the transfer, extras, and the off-chance your reaction my be completely different from mine, Rent It.