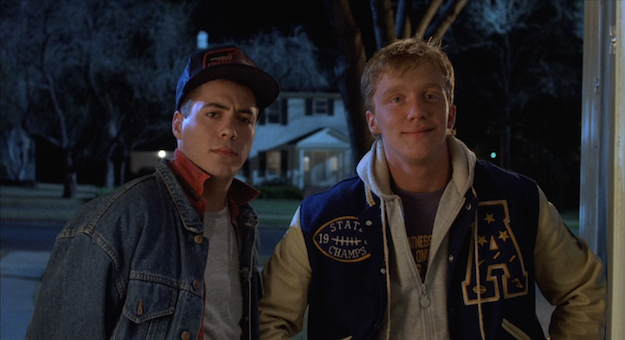 The 1988 movie Johnny Be Good is a lackluster attempt to make another one of those raunchy, crazy comedies for which the '80s are so well known. With a script from the writers (and a producer) of one of the most famous of '80s comedies, Revenge of the Nerds, this story seems to have started off knowing what it wanted to be, but then must have gotten muddled on the way to the screen. Bud Smith, an Oscar-nominated editor who has worked on movies as diverse as Robert Downey's Putney Swope, The Exorcist, and the original Karate Kid, made his one and only directorial effort here (besides some second unit work). One gets the feeling from the film that he didn't continue directing because he doesn't seem to like it. There's a half-heartedness that hangs over what should be -- at the very least -- a silly teenage romp.

Anthony Michael Hall proves he can play more than just nerds in John Hughes movies, with his starring performance here as All-American high school quarterback Johnny Walker (if you wonder, as I did, if his name is supposed to be funny, it's not the only thing in the movie that will inspire a confused "is that a joke?" reaction). Johnny is the envy of every college football team in the country, and he finds himself hounded by scouts at every turn. He has promised his girlfriend Georgia (Uma Thurman, looking like a baby) that he will stay in-state for college so they can be together, but he decides to let colleges throughout the country fly him out for some wining and dining anyway. His mentally unstable buddy Leo (Robert Downey Jr., doing that thing he did for most of the '80s) would like him to stay too, but when colleges start bribing him to get Johnny to look at their schools, he can't resist the bait. The Breakfast Club's Paul Gleason also appears as Johnny's coach, who wants to steer Johnny toward a school that has promised to hire him if he can get his star player on their team.

Watching Johnny Be Good, it's hard not to think about Spike Lee's He Got Game. Not just because both films deal with the ridiculous temptations facing talented high school athletes as they pick their college teams, but because He Got Game just covers this ground in a way that's infinitely smarter and more entertaining than this film. When Johnny ends up at a Texas barbecue, getting seduced by the wife of a team booster, there's no fun in it. When he goes to California and comes back looking like a purple-clad backup dancer in a Bobby Brown music video, the movie might as well be science fiction.

It doesn't help that Hall is perpetually laid back throughout the film. In his hangout scenes with his best bud or having dinner with his folks or flirting with his girlfriend, this makes sense. But he stays in this flat mode throughout the film. The script hinges on the fact that Johnny is supposed to be seduced by all the wild shit he sees at these different schools. But the seduction isn't convincing to the viewer and it doesn't even seem to be convincing to the star. There are plenty of moments where Bud Smith probably should have taken Anthony Michael Hall aside and said, "Uh, let's try that again, but this time, play the scene like you give a shit what's happening to you." Instead, it seems like Smith more often said, "Fine, whatever. Moving on!"

It creates an unusual low-key rhythm for what should probably be a tighter, punchier flick. This stylistic disconnect makes for fascinating if not exactly entertaining viewing. In fact, if not for the infuriatingly pat ending, I would have probably given this flick the mildest of recommendations to oddities-seekers. After all, what other film has a moment in which Robert Downey Sr. appears in a bit part, sitting in a drive-in and muttering disparagingly about the movie onscreen -- and the movie is his own Putney Swope. And, as this amusing tribute points out, the younger Downey consistently seems to be acting in his own private movie of which none of his fellow actors were made aware. And you heard the part where I said a 17-year-old Uma Thurman is in this, right?

The sight of Thurman in form-fitting PJ's aside, this theoretical raunchy comedy oddly fails on the titillation front. Despite the PG-13 rating on the box, the cut presented on the Blu-ray is the slightly longer R-rated version. It isn't much of an issue really, because this movie exists in a PG-13 universe where women keep their clothes on in a strip club and the hero clearly would never cheat on his girlfriend. The brief added nudity that garnered the R plays like an afterthought -- which it clearly was. [EDIT: I have been informed by an eagle-eyed reader that the nudity I am referring to was in the theatrical version, and the extended R-rated cut has only been available on the VHS version and on premium cable back in the day. The DVD mistakenly labeled the theatrical cut as R, and, in this case, so did I.]

Apart from the lingering memories of folks who might have caught this flick during its cable airings, Johnny Be Good is largely forgotten... and for good reason. 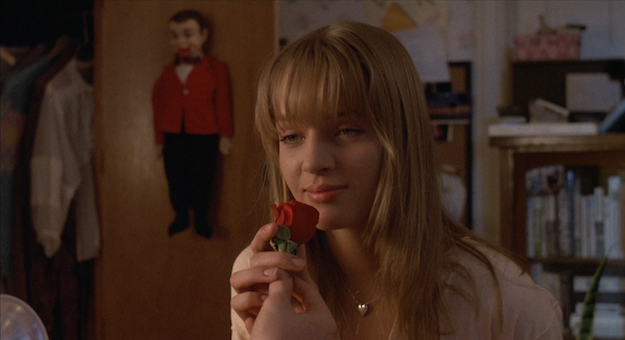 The Video:
There's a fair amount of specks and dirt present in this AVC-encoded 1080p 1.85:1 presentation, but otherwise it's a great-looking transfer with plenty of fine detail and strong colors. No significant digital compression issues either.

The Audio:
I can safely say that I hated most of the music in this film, from the Judas Priest cover of "Johnny B. Goode" on down, but I must admit that the DTS-HD MA 2.0 stereo audio made it all sound great for what it is, with a particularly strong bass response. Otherwise, no complaints with the dialogue or effects. It's a fine audio mix.

Special Features:
You can press the stop button at any time.

Final Thoughts:
I'm glad that Johnny Be Good is available in an attractive Blu-ray presentation for any of those fans who want the upgrade. I just can't imagine who those people would be, is all. Skip It. 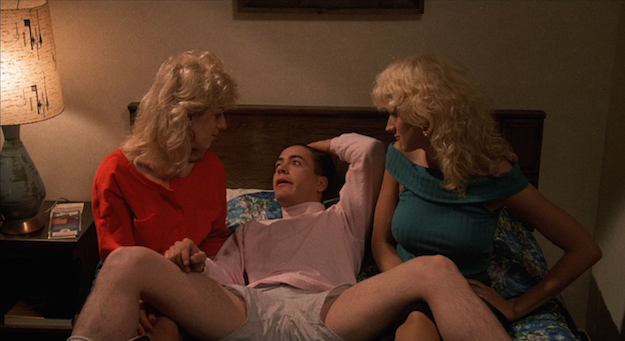