Even though it's easily the worst of Mel Brooks' non-spoof films (His worst overall is the Dracula spoof in my opinion), I have to give the comedy legend credit for trying something different and more culturally substantial than another spoof during a time when his career was still going strong. Life Stinks is the first non-spoof film Brooks directed since 1970s underrated Russian farce Twelve Chairs. It's basically a remake of the Preston Sturges classic Sullivan's Travels, about a wealthy man who purposefully tries to live the life of a homeless person, with a timely anti-Reaganomist twist around it. 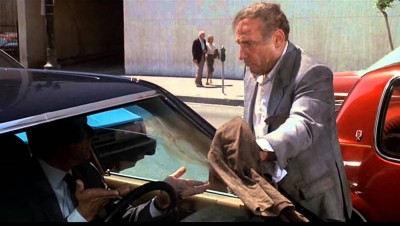 The biggest difference between the two films is the main character's motivation for living a poor life. In Sullivan's Travels, Hollywood director John L. Sullivan puts the challenge on himself in a desperate attempt to understand the poor as research for his upcoming working class melodrama. The protagonist of Life Stinks is an out-of-touch billionaire named Goddard Bolt (Mel Brooks), who accepts a bet from competing billionaire Vance Crasswell (Jeffrey Tambor) that he can live as a penniless bum for thirty days. Goddard came from money, while Vance made his own fortune. Vance thinks Goddard can't survive without his wealth, and the clueless Goddard takes the bet in a pathetic attempt at proving his manhood.

The film's first act works very well as post-Reagan satire, with Goddard looking only after the bottom line of his business. Even though his lawyers keep telling him that his new construction project will destroy the lives of thousands of natives living in the Brazilian rainforest, he refuses to see anything wrong with it until he's told that the bad publicity might hurt his business. Pretty much any scene that returns to the land of the rich is smart, snappy and has a bite to it. It's when Goddard becomes a homeless man that Life Stinks devolves into a series of tired slapstick skits mixed with scenes awash in awkward melodrama, instead of offering a lighthearted but honest look at living poor in Reagan and HW Bush's America.

Some of the casting choices are very questionable. Leslie Ann Warren's scenery chewing turn as a kooky homeless woman who falls in love with Goddard almost single handedly brings the movie to its knees. Brooks and Warren have next to no chemistry and they both act like they're in completely different films. As far as the slapstick skits are concerned, most of them land with a thud, including a bonkers third act that involves a Robot Jox battle between two bulldozers. I have to admit that there's one brilliant running gag involving Goddard beating up a deranged homeless man (Co-writer Rudy De Luca) because he's upset that the man's imaginary wealth always ends up being larger than his real one. 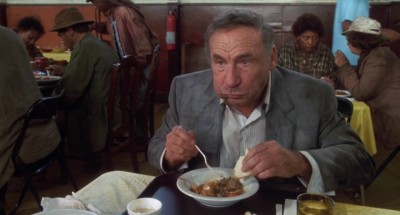 Life Stinks comes to Blu-ray with a very impressive 1080p transfer, considering that it's a release from an art-house distributor. The film's typical early 90s soft focus look and pastel colors are represented perfectly; there aren't a lot of instances of scratches and dirt, and very little noticeable DNR. The transfer also showcases some grain and a film-like look.

The DTS-HD 2.0 track seems to be directly transferred from the original theatrical mix. It's an unremarkable mix that only comes alive when the unmemorable typical 90s comedy score kicks in. Otherwise, it's a clean track and there's a nice balance between dialogue and sfx.

Does Life Really Stink?: This is a 14-minute featurette from the film's 2003 DVD release where Brooks and his co-screenwriters talk about the film's inception and production. Informative and brief.

Commentary by Mel Brooks, Rudy De Luca, and Steve Haberman: The co-screenwriters discuss the production in detail. A lot of the information can be found on the featurette, so if you want a cliff's notes version, watch that.

With Life Stinks, Brooks attempts to bring together a heartfelt dramedy with some profound sociopolitical messages. Unfortunately, he can't leave behind his slapstick tendencies and an opportunity for a biting satire becomes lost amongst the silliness. That being said, if you're a big fan of this film, you can't do better than this surprisingly clean Blu-ray transfer.