Real Men gets an A for effort as far as being one of the earlier adopters of the irreverent near-parody comedy/action flicks. The way it spoofs the exaggerated conventions of the 80s ultra macho action genre while also trying to become a bone fide example of it is a tonal approach that's much more prevalent these days. In fact, it's not hard to imagine Real Men's premise and kitchen sink approach of mixing action, comedy, and sci-fi being retrofitted to Edgar Wright and Simon Pegg's Cornetto trilogy. We don't even have to go as far as Hot Fuzz to find an more contemporary example of such a genre bending exercise, Paul Feig's current action/comedy hit Spy also fits real thrills into its ridiculous premise and borderline parody tone. 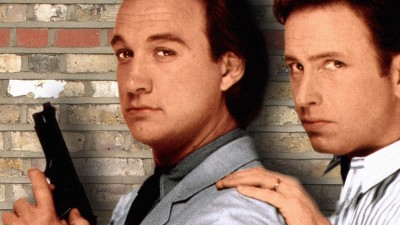 What stops Real Men from being truly memorable, or even anything above merely competent, lies in first time director Dennis Feldman's bland visual approach and questionable casting choices. Feldman, who also wrote the screenplay, goes for a goofier tone than usual for the late 80s as he puts together a typical odd couple buddy cop comedy. The film's narrative style feeling fresher than other 80s action/comedy flicks like Beverly Hills Cop is due to the way it exaggerates and subverts genre conventions instead of simply sticking a comedian in the role of an action hero while keeping all of the action movie tropes intact.

The badass spy archetype of Real Men is Nick Pirandello (James Belushi), a less than subtle mix of Bond, a cocky 80s action hero, and an explosion at a testosterone lab. He lives to dodge bullets and bed hot chicks. In fact, he's so cool that bullets literally dodge him and the hot chicks are lining up to bed him. He's assigned to escort awkward and meek insurance agent Bob (John Ritter) through a dangerous mission. You see, Bob looks exactly like an agent who was supposed to complete a vital assignment, so he's the only person on Earth who can pull it off. Otherwise, the future of the planet is at stake, because of course it is.

I give credit to screenwriter Feldman for going with a more creative McGuffin as the usual excuse to build an odd couple comedy. Instead of Bob's mission being the usual "stopping a nuclear bomb from being sold to a nefarious terrorist organization" etc…, seemingly random but refreshingly creative elements like overtly benign humanoid aliens who are willing to trade their superior technology for a glass of water is thrown into the mix. The overall screenplay has a proudly irreverent and goofy tone to it, and as such, it's a couple of decades before its time.

As far as the story structure and character arcs are concerned, Feldman does an unremarkable but decent job as he gradually lets the two wildly different protagonists switch personalities. As the dangerous mission goes on, Bob learns to stand up for himself while Nick understands the value of love and friendship as he softens up. Pretty basic stuff, but effective nevertheless.

The problems begin with director Feldman's flat execution. Constructing genuinely exciting and thrilling action sequences in the middle of all the snappy jokes is vital to selling such a self-aware comedy. Edgar Wright understood that and found a perfect balance between the two genres for Hot Fuzz. In Real Men, perhaps because of Feldman's inexperience as a director and possible technical and budgetary limitations, the action scenes are shot and edited in a flat and lifeless way. Feldman basically places the camera on a static long shot and lets the muzzle flashes and squibs to the heavy lifting.

In order to sell Nick as the ultimate badass, an action star previously deemed pretty humorless, like your Chuck Norrises or Steven Seagals, would have killed in that part. Think of how well casting Jason Statham worked for Spy. James Belushi's cocky persona and self-aware delivery doesn't really go hand-in-hand with Real Men's genre stretching style. On the other hand, John Ritter is pitch-perfect as the fish out of water straight man who eventually becomes an alpha male agent.

Real Men's 1080p transfer captures the film's typical 80s look awash in pastel colors with a good amount of grain in the presentation and minor to no DNR. Unfortunately, it also suffers from small but noticeable instances of scratches and dirt. That being said, this is by far the best Real Men will look on home video. I remember renting the VHS in the 80s and that of course doesn't even compare. Just don't expect the quality of a, say, recent blockbuster release.

The DTS-HD 2.0 presentation sports a surprising amount of power and depth, especially when it comes to the toe-tapping score. There's a discrepancy between the score and the dialogue and sfx where the volume of the score is significantly higher, forcing me to constantly adjust the volume. This problem usually occurs while downmixing a 5.1 track on 2.0 TV speakers, but the native track is 2.0 in this case and I watched the film on my sound system so I'm not sure why this issue occurs. It might have had something to do with keeping Dolby Prologic turned on, but I sampled the film on my TV and the same problem persisted.

We only get a Trailer.

As an early adopter of the absurdist action/comedy style that became more popular in the 21st century, Real Men is a far from perfect but worthy specimen for fans of such films to check out. It's not on the level of Hot Fuzz or an out-and-out great action parody like Hot Shots: Part Deux, but it's silly enough on all fronts.