Arrow Features // Unrated // April 21, 2015 // Region 0
List Price: $39.95 [Buy now and save at Amazon]
Review by Stuart Galbraith IV | posted May 16, 2015 | E-mail the Author
The title of Teruo Ishii's Blind Woman's Curse (Kaidan nobori ryu, "Ghost Story of a Rising Dragon," 1970), alternately known as The Haunted Life of a Dragon-Tattooed Lass and The Tattooed Swordswoman, suggests a classical kaidan eiga, or Japanese ghost story movie. In fact, the horror elements are slight though ghoulishly effective, while the bulk of the picture alternates between straight-faced and tongue-in-cheek yakuza-chanbara thriller. It's a sometimes confusing film full of subplots, double-crosses, and murky, supernatural revenge elements. But if logic and coherence aren't primary concerns for the viewer, Blind Woman's Curse is a fun, wild ride.

As has become the standard for Arrow Video releases, the disc positively chokes with supplements, while the movie itself looks great in its original Nikkatsuscope (2.35:1 anamorphic widescreen) format. 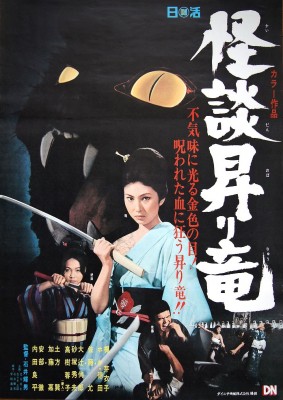 The bulk of the story concerns Gang Boss Dobashi's (perennial bad-guy boss Toru Abe) attempts to start a gang war between the Tachibana clan and another rival, the Aozora Gang, in order to usurp both territories. He conspires with the ambitious, traitorous Tatsu, but Akemi repeatedly refutes Tatsu's relentless, John McCain-esque calls to arms. Further, the colorful and pungent Aozora (Ryohei Uchida) is likewise reluctant to fight the Tachibanas. From the waist up he sports western-style silk shirts, a vest, and a bowler, but from the waist down wears only a loincloth. There's a lot of humor revolving around the putrid smells emanating from that loincloth.

Elsewhere, reformed gangster Jutaro (Yoshi Kato) operates a restaurant with his daughter (or niece, the movie seems to contradict itself on this point), Chie (New Face actress Yoko Takagi). They encounter "pure" gangster Tani (Makoto Sato) whose strict moral code has him aiding the Tachibana clan at various points in the story. Aiko, meanwhile, returns to the story as a blind knife-thrower at a grotesque matsuri (festival) sideshow complete with disembodied heads, while also hanging around the fringes of the Dobashi clan, sometimes accompanied by a haggard hunchback, Ushimatsu (Tatsumi Hijikata).

Akemi slowly becomes convinced that her family has been cursed. One by one members of the gang are winding up dead and their corpses mutilated, often with their dragon tattoos skinned and displayed apart from their bodies.

The genre-fusing weirdness of Blind Woman's Curse is partly explained by some obvious desperation on Nikkatsu's part to win back a once-loyal audience that had abandoned them for free, convenient commercial television throughout the 1960s. The studio was in financial straits, so combining several durable genres and spicing it up with a bit more blood and skin probably seemed like a good idea. However, Blind Woman's Curse came too late. It was one of the last mainstream movies produced by Nikkatsu before it switched to roman poruno ("romance porno"), and one of a series of films distributed by Dainichi Eihai, a merger agreement between Nikkatsu and the equally cash-strapped Daiei.

Apparently even director Teruo Ishii considered Blind Woman's Curse to be confusing mess. Aiko wants revenge, but it's never quite made clear to what extent supernatural powers, propagated by her or merely tangential, are real, or whether most of this is being perpetrated by Dobashi and Tatsu in their psychological war against the Tachibana clan. Regardless, Hoki Tokuda is appropriately creepy in the role. She made only four films, as she was primarily a jazz singer and, amazingly enough, was at the time married to American writer Henry Miller (Tropic of Cancer, etc.), by then an old man of 78.

By this point in his career, director Teruo Ishii had grown weary of the Toei grind, cranking out "Abashiri Prison" films with star Ken Takakura. He began dabbling in eru guro ("erotic-grotesque") films, including Shogun's Joys of Torture (1968), Hell's Tattooers, and Horrors of Malformed Men (1969). Blind Woman's Curse has its share of signature Ishii weirdness: Dobashi's hideout, for instance, is a maze of half-naked prostitutes zonked-out in a homemade opium den; there are trap doors, funhouse mirrors, and an elaborate water-torturing device. The climactic showdown between Akemi and Aiko features a swirling cloud backdrop painting that would fit right in Masaki Kobayashi's Kwaidan, along with ghoulish black humor around every corner.

And, of course, there's Meiko Kaji, whose wide-eyed steely gaze, pouty lips, and delicate features (even her eyebrows are sexy) made her one of the iconic ‘70s stars of several genres. By this point directors like Ishii seemed to realize that she photographed best from angles looking down upon her facial features, and though perfectly fine delivering expository dialogue, her characters were more effective with less dialogue and more attention paid to her strikingly intense stare. (The movie that best capitalizes on this: Shunya Ito's Female Convict Scorpion: Jailhouse 41, 1972.)

Filmed in 2.35:1 CinemaScope format (presented in 2.44:1 widescreen here), Blind Woman's Curse looks great on Blu-ray, with Ishii and cinematographer Shigeru Kitaizumi using the format spectacularly well, as was the norm for Japanese movies of all kinds during this period. The mono audio, Japanese only with optional English subtitles, serves composer Hajime Kaburagi's (Tokyo Drifter) score and Kaji's vocals well. The disc is all-region and there's a reversible sleeve, along with a standard-def DVD of the film and its extras.

Supplements include an original trailer, also in high-def and arguably even sharper than the feature presentation. (Japanese trailers of this period routinely used alternate takes derived from the original camera negative, hence their sharpness.) Also included are trailers for the Meiko Kaji-featured "Stray Cat Rock" series, another extremely fun Arrow Video release. The main supplement is Jasper Sharp's highly informative, observant audio commentary, one crammed with lots of useful and interesting information.